14 Old Glory Facts to Share and Celebrate This Flag Day!

Each year, on June 14th, we celebrate Flag Day but don’t feel bad if it wasn’t on your radar, I actually didn’t really know much about it until 2007 when my daughter was born on that day. (Happy Birthday, Gracie!!)

Now that it’s in my consciousness, please allow me to add it to yours. Check out these VERY cool facts about Old Glory we can all share as we celebrate Flag Day and all year long!! 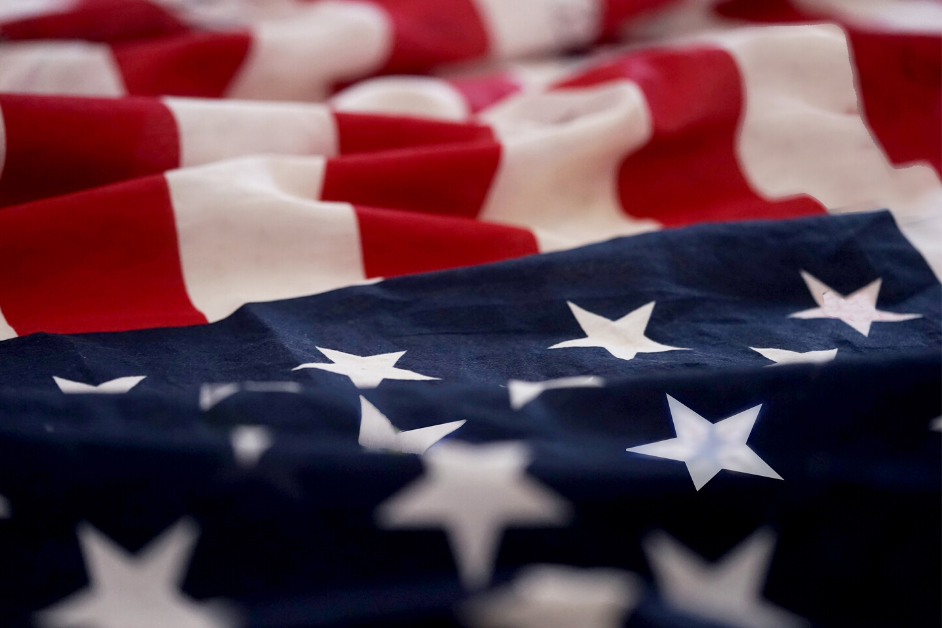 1. The first American flag was called “The Continental Colors” or “Grand Union Flag” and consisted of thirteen stripes with the Union Jack in the upper left corner. Even after 1776, following the signing of the Declaration of Independence, the design (featuring Great Britain's flag) remained the same from 1777 to 1795.

2. On June 14, 1777, a resolution to create a new, official flag for the new nation was passed during a Second Continental Congress meeting in Philadelphia. The Flag Act of 1777 stated, in part, that America’s flag “…be made of thirteen stripes, alternate red and white; that the union be thirteen stars, white in a blue field, representing a new Constellation.” This design waived proudly over the New America until 1794.

FAST FACT: There have been 27 versions of the American Flag, each with a different amount of stars!

3. On May 30, 1916, then-President Woodrow Wilson issued a Presidential Proclamation to establish a day to honor the anniversary of the flag resolution and on August 3, 1949, then-President Harry S. Truman signed an act of Congress to designate June 14 of each year as the National Flag Day.

4. The original Star-Spangled Banner, the flag that inspired Francis Scott Key to write the song that became our national anthem, is among the most treasured artifacts in the collections of the Smithsonian's National Museum of American History in Washington, D.C. 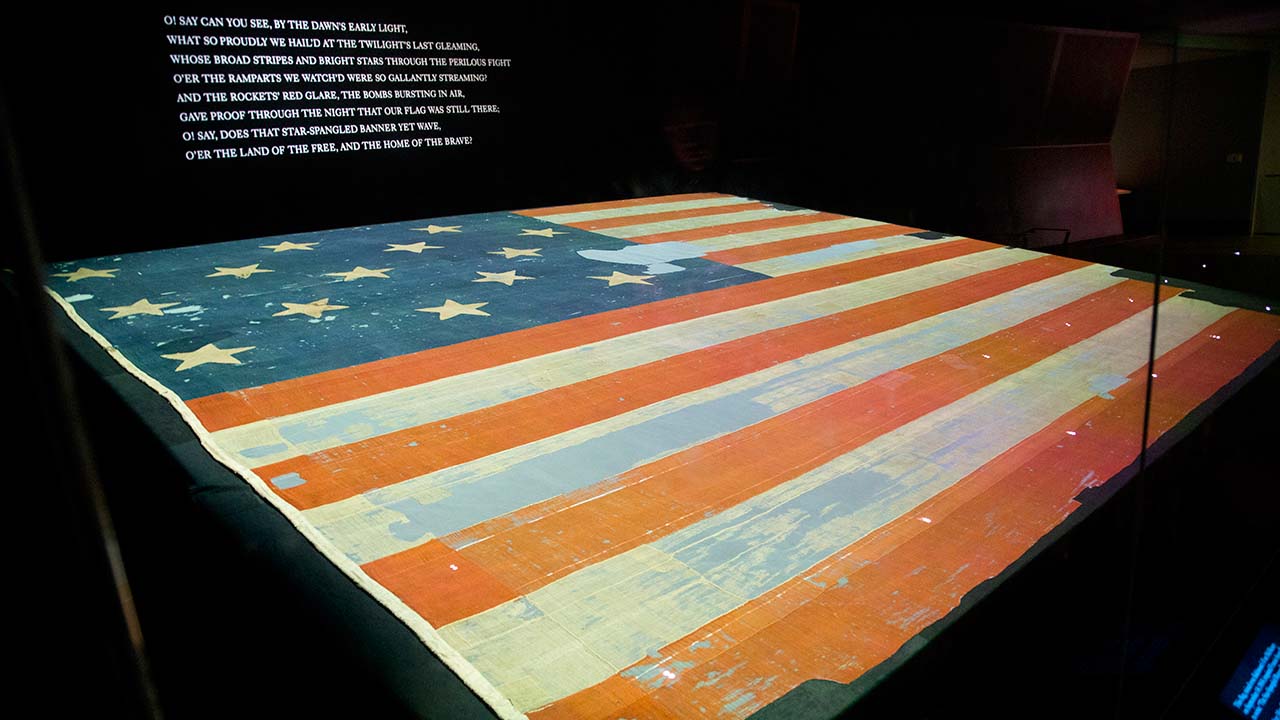 The flag that inspired the national anthem 'Star-Spangled Banner' is on display at Smithsonian's National Museum of American History in Washington, D.C. Photo/AP

5. While Betsy Ross is credited with the first American flag featuring its legendary stars and stripes, credit for the current flag design goes to a Sophomore from Ohio! In 1958, 17-year-old Robert G. Heft was given a school project to design a new American flag. “Inspired by the Betsy Ross story,” and trusting that Alaska and Hawaii would soon gain statehood, Heft created the now-famous American Flag featuring 50-stars, although there were only 48 states at the time. His teacher, who gave the project a B- and scolded, "you don’t even know how many states we have,” upgraded the mark to an A after AK and HI became states in 1959 and President Eisenhower picked Heft’s flag design as the new banner of the nation in 1960! 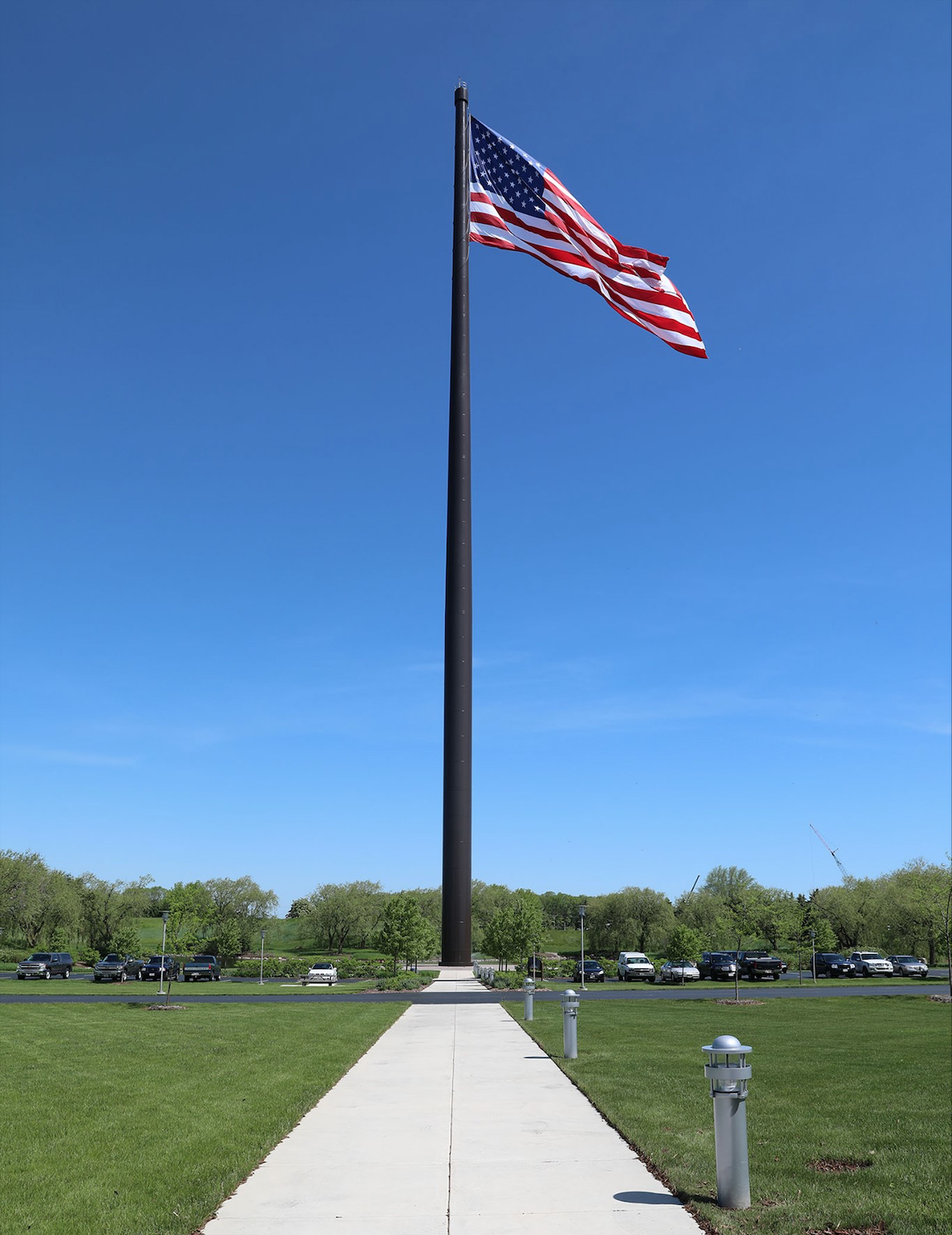 6. Standing 400 feet tall, the Acuity Insurance Flagpole is the tallest flagpole in North America. The flagpole, which is nearly 100 feet taller than the Statue of Liberty, also boasts the world's largest free-flying American flag at 70- by 140-foot. Each stripe is over 5 feet high, each star nearly 3 feet across, and the 9,800-square-foot flag weighs 340 pounds! The flagpole, which weighs 420,000 pounds, is designed to withstand Wisconsin temps of -42 degrees and wind speeds up to 120 miles per hour.

7. Even the colors of the American Flag were carefully selected to honor our nation's birth! The red stands for valor and bravery, white for purity and innocence, and blue for vigilance, perseverance, and justice. The Textile Color Card Association of the United States (TCCA) creates the palette of colors used for both private and public institutions and the U.S. Army is in charge of the reference guide of acceptable shades to be used in local, state and national flags. While the exact shades of "White", “Old Glory Red” and “Old Glory Blue,” are specified in the guide, flag manufacturers have been known to use more-easily processed Pantone Matching Shades of Dark Red (193 C) and Navy Blue (281 C) for mass production.

8. After a tragedy like 9/11, the United States flag is flown at half staff for 30 days as a representation of the entire nation joining together in mourning.

FAST FACT: It's called "half staff" on land and "half-mast" on a ship!

9. According to the U.S. Flag Code website, the flag should be illuminated if flown at night, never flown in bad weather, only flown upside down to signal distress, raised quickly and lowered slowly, and no other flag should be placed above it. 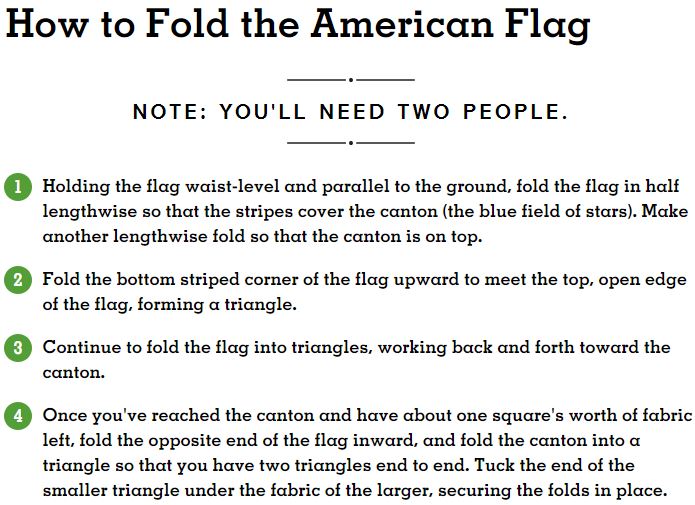 10. While the battle over the right to desecrate the flag remains a hot button issue today, however, the first anti-desecration concerns had little to do with flag burning. 19th-century lawmakers were more concerned with the flag being used as a promotional tool by advertisers, which they considered treating the banner with “contempt.” Many of the first statutes passed by state and local governments aimed to restrict the use of the flag’s image on commercial products. In 1907, the Supreme Court upheld these laws in the case of Halter v. Nebraska, and many of them remain on the books today.

11. In 2006, the Flag Desecration Amendment, which stated "Congress shall have the power to prohibit the physical desecration of the flag of the United States”, failed to pass in the Senate... by one vote.

Between and Beyond Americas Borders

12. In 1909, American explorer Robert Peary place the American flag on the North Pole, the northernmost point on Earth.

DID YOU KNOW? You can order a "Flag Over the Capitol" as a gift or keepsake? Simply request to have a U.S. flag flown over the U.S. Capitol in Washington, D.C. to honor a person, organization, or event! Go to the website of one of your U.S. senators or representatives, click on Constituent Services, and select Flag Requests. A certificate from their office will accompany your flag as a record of the event and prices are surprisingly affordable: from $21-30 depending on the size and fabric you choose!

13. In 1963, American mountaineer Barry Bishop placed the American flag on Mount Everest, the highest point on the planet Earth.

14. On July 21, 1969, American Astronaut Neil Armstrong planted the first American Flag on the surface of the moon during the Apollo 11 mission. However, it is the only one of the six flags the astronauts placed on the moon that is not still standing, as it was blown over by the ship as it departed. Although the remaining flags are still standing, they are now unrecognizable as an emblem of the United States. The conditions have bleached the flags of their color so the red, white, and blue is barely visible. The flag poles, fabric, and coordinates are the only signifier that they are American flags. 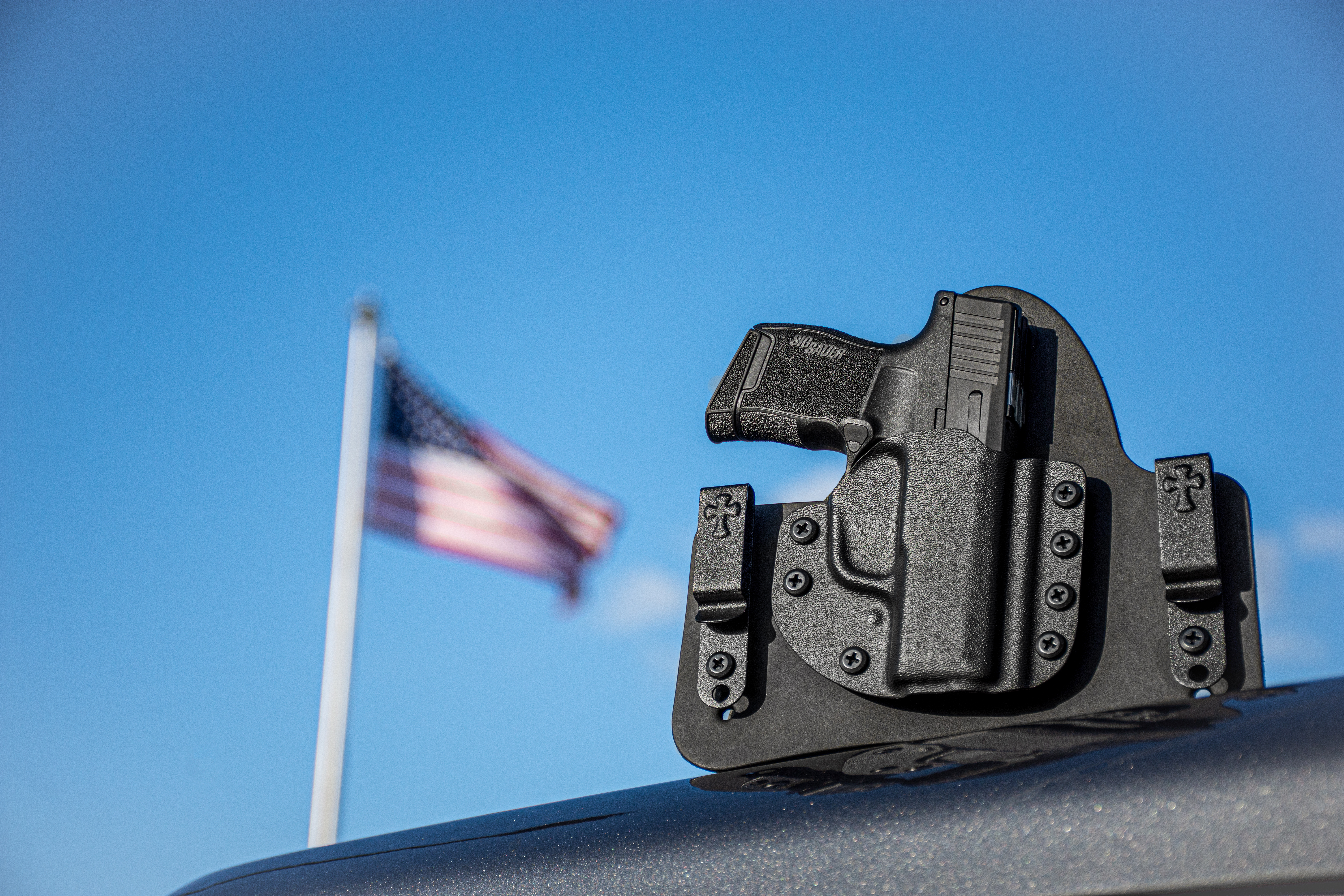 Long May She Wave!

Were you surprised to learn any of these Flag Day facts? How do you celebrate June 14th?

Sound off in the comments, we want to hear from you.

Jenn Jacques is a fierce 2A  defender, concealed carry advocate, fishing enthusiast, avid hiker, hunter, and an all-around great gal with a gun. As a former Private Detective, Jenn put those skills to good use, fighting for gun rights in her home state of Wisconsin before becoming the first female editor of a 2A/Gun News site and moving on to become a publication writer, popular multi-media guest, and respected news expert.

Jacques has completed hundreds of hours of firearms training including USCCA's Street Encounters and Low Light/No Light Training, she is a graduate of the Gunsite Academy, and was named a S.A.F.E. Summer Local Champion of Firearm Safety by NSSF's Project ChildSafe. 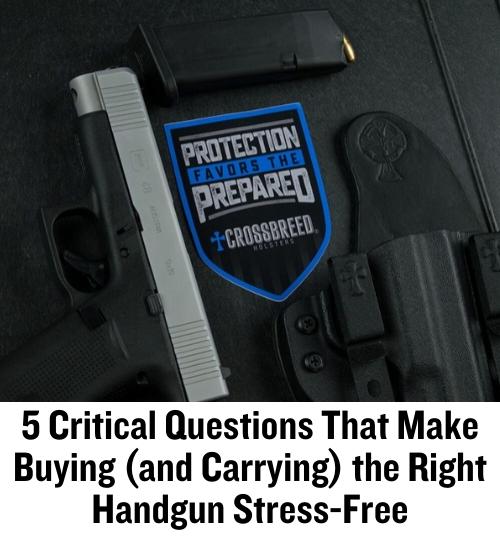 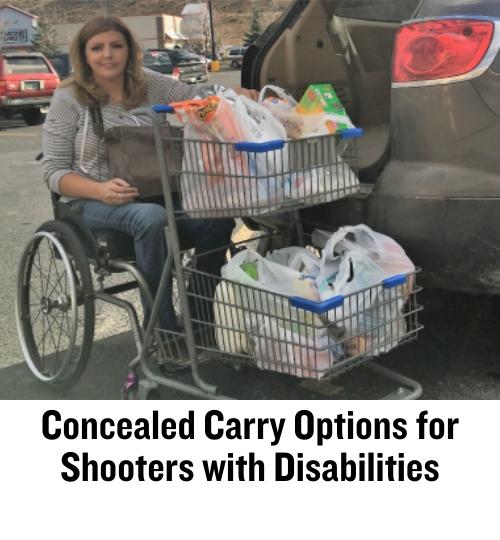 ©MTC Holsters, LLC and CrossBreed Holsters Blog, 2020.
Unauthorized use and/or duplication of this material without express and written permission from this site’s author and/or owner is strictly prohibited. Excerpts and links may be used, provided that full and clear credit is given to Jenn Jacques and the CrossBreed Blog with appropriate and specific direction to the original content.