Once upon a time, Sig Sauer released the P250; a DAO handgun that featured an innovative chassis system that would allow you to swap gun sizes, calibers and had the potential to be highly customizable. While the P250 was a failure, it did spawn the P320 which was an immensely successful gun.

That same chassis system used in the P250 and P320 eventually made its way into the P365. The chassis system seemed to be a back seat in the gun’s design and wasn’t a main selling point. However, the aftermarket industry saw this gap and scrambled to bring a proper grip module for the Sig P365 to market.

Enter a small company called Icarus Precision and the ACE up their sleeve.

Why would you want a metal grip?

The P365 is a small, lightweight gun designed for concealed carry, so you may be wondering why anyone would want to add weight to it. Because it is an all-metal grip module, the Icarus Precision ACE grip does add some weight to the gun but it does much more than that. Icarus Precision wasn't looking to simply produce a grip module, they designed it to improve the ergonomics of the P365’s grip.

ACE, according to the company, stands for Accuracy, Control, Enhanced.

Does it live up to its acronymic name? Let's break it down!

More Than Just a Grip Module

The added weight, while minimal, does help to reduce recoil and extends better control over the handgun. When holding the pistol grip modules side by side, you can feel the difference but it’s not major.

The Icarus Precision grips also offer two palm swells one on either side of the Grip Module. These do help fill my hand and I really like the feel of them in my grip. Icarus Precision makes a V2 model without them but I’m here to say I endorse them. Personally, I find them to be comfortable as well as to aid in keeping the little gun firmly planted in my hand.

To the rear, it has an extended beavertail which is comfortable and creates a leverage point to control muzzle rise. This little improvement helps quite a bit on the range. The Icarus Precision ACE Grip Module has noticeably less recoil and muzzle rise than the stock P365. After the gun fires, the sights are seemingly already back on target and ready to go.

I noticed the biggest difference when firing +P ammo and firing rapidly. It’s much easier to stay on target while firing rapidly with the ACE. The increased recoil and snap of a +P defensive round is also tamed considerably by the metal grip module.

Think about what that means. Running through drills that focus on practical defensive shooting showed that the ACE offered a clear advantage. Putting two in the chest and one to the head with the ACE is much faster while retaining an excellent degree of accuracy.

In the El Presidente drill, I was able to beat my best time of 8.5 seconds with a stock P365 on the first try with an 8.23 time. The iHack Drill has never been easier with a small gun.

A better grip on the gun and more controllability certainly help with practical accuracy. As far as shooting at longer ranges I didn’t notice a big difference between the guns. At 25 yards the gun didn’t shoot noticeably more accurate than the stock grip module.

I need to mention that the Icarus Precision ACE Module also uses a standard Picatinny rail that allows you to mount smaller lights and lasers. It’s just long enough to something like a Crimson Trace rail master or a Mini Olight. It’s a nice touch and to me, it’s better than the proprietary rail SIG uses. 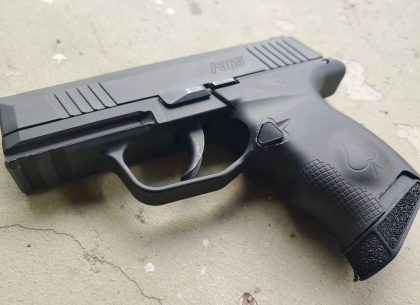 Is The Icarus Precision Grip For You?

That’s hard to say. The Icarus Precision ACE Grip Module is somewhat expensive for sure, but as far as small-batch precision machine work goes it’s priced very fairly. The Icarus Precision grip module does make it easier to control and fills my fat hands well. I honestly love it and see the performance increase well worth a little extra weight.

Additionally, finding holsters for it isn’t impossible. For example, the Reckoning Holster fits it like a glove! The key to carrying any gun comfortably is the holster. The Reckoning offers two metal clips that provide plenty of support for the little extra weight the ACE Grip Module adds to your P365.

I don’t mind the weight. I would also say if you shoot competitively in the BUG division this might be the perfect gun for you. The ACE Module from Icarus Precision is well made and feels amazing in the hands. A product that does exactly what it claims, who doesn't appreciate that?

What do you think? Let us know in the comments below!