When Mossberg announced they were introducing a pistol, heads turned fast enough to hear them snap. The last time Mossberg introduced a handgun, it was over a hundred years ago.

In keeping with the recent industry trend of offering smaller, more compact firearms focused on serving the concealed carry market, Mossberg released the MC1sc this year.

The base model is the simplest, with three dot sights and the choice of a safety or non-safety model. There is also a model with a Trijicon night sights and a final model with a Viridian laser installed.

The 7 round slightly extended magazines offer a nice grip on Mossberg's MC1sc that fills your hand and makes the weapon comfortable to shoot. The grip is rock solid and is wide enough to fill your hand comfortably. The trigger is a smooth 5 pounds or so, and the trigger has a very nice reset. You can feel and hear it. 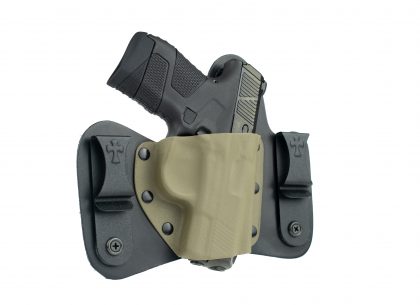 The following holsters are available to order for the MC1sc with more fits coming in the near future: 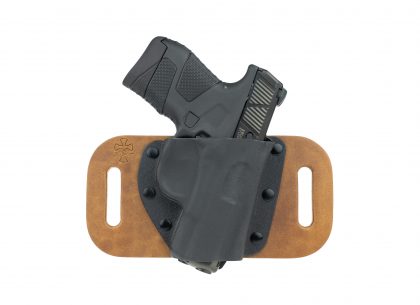 The following magazine carriers are also available for the Mossberg MC1sc for purchase right now.
Please note on the Accomplice Mag Carrier to select the Staggered 9mm option.

Have you tried or are interested in trying out the new Mossberg MC1sc? Let us know your thoughts on it in the comments below!!

Check out our Facebook LIVE video from the booth, featuring the MC1sc's Safe Takedown System™ as well!

She is the daughter of a great hunter, a wife, a mother, a Visiting Fellow with the Independent Women’s Forum, a former editor for Bearing Arms, and a “good gal with a gun.” She frequently appears on NRA TV, has been covered by Townhall.com, the Washington Post, and Women’s Outdoor News. She is a graduate of the Gunsite Academy and has hundreds of hours of firearms training under her belt.

Jacques is an active and ardent supporter of the Second Amendment, an outspoken concealed carry advocate, and an avid outdoorswoman.