The Mossberg MC1sc: In Our Hands and On Target at SHOT Show

When Mossberg announced they were introducing a pistol, heads turned fast enough to hear them snap. The last time Mossberg introduced a handgun, it was over a hundred years ago. The Brownie was a tiny gun: a four-shot 22 LR pistol designed for quick executions of trapped animals. The new Mossberg pistol is a subcompact, single stack 9mm handgun they've named the MC1sc and we were thrilled to have the opportunity to handle them at SHOT Show 2019.

The MC1sc is entering an already saturated market. There are dozens of different subcompact, single stack guns on the market and it's a tough market to break into. That being said, I think Mossberg has a real shot at hitting a bulls eye with this gun. They're also introducing several different models of the weapon that sport numerous features to help increase those odds.

The base model is the simplest, with three dot sights and the choice of a safety or non-safety model. There is also a model with a Trijicon night sights and a final model with a Viridian laser installed. The safety model is unique and features a cross bolt safety that is reversible for right and left-handed shooters.

Mossberg describes the MC1sc on their site as follows:

Introducing the MC1sc Subcompact 9mm Pistol by Mossberg. Combining optimal shootability with superior ergonomics, the MC1sc features an optimized grip angle for easier targeting, a flat-profile trigger for an improved pull, and our exclusive Safe Takedown System™: a design that does not require the user to pull the trigger during the disassembly process.

The MC1sc was built for concealment with its slim, dehorned profile that allows for a snag-free draw. Weighing only 22 ounces fully loaded, its lightweight and durable polymer construction is perfect for everyday carry. And with its grip palm swell, the MC1sc will feel natural and comfortable in your hand. Grip panels are integrated with aggressive texturing for added control. It all adds up to the ultimate concealed carry firearm. 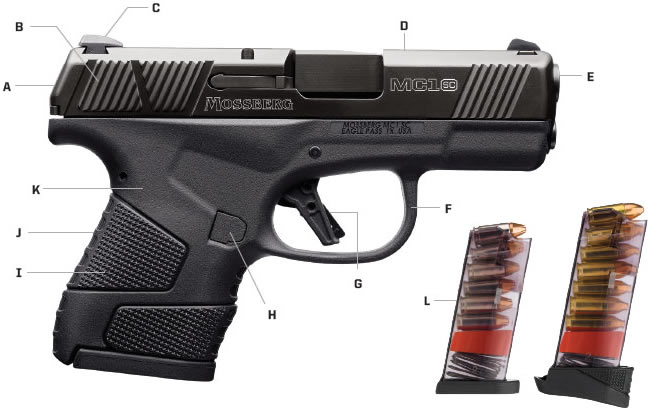 On top of that, the gun has a ton of smart features that make it readily accessible and easy to own. A big problem with new guns is the lack of aftermarket support, but Mossberg realized this and has already addressed the subject. Mossberg utilizes a Glock 43 magazine, showing there is already aftermarket support. The sights are Sig #8 sights which again offers you aftermarket support and even rear sight bases that allow you to attach a red dot to the optic.

I was very pleased to see plenty of MC1sc guns and every model available to us during Industry Day at The Range. I took the opportunity to start out with the Trijicon model and send plenty of lead downrange. The targets included an IPSC style target with a hostage popper at about 20 yards.

After firing a few practice rounds and hitting my target dead on, I went after the popper. My brow was furled, my eyes focusing hard on the front sight as I perfected my grip. I squeezed the trigger ready to embarrass myself and let the lead fly. The ding of lead on steel greeted me as well as the swinging of the hostage popper. With a big smile, I repeated the process for the next five rounds and was easily able to keep the popper swinging from side to side. 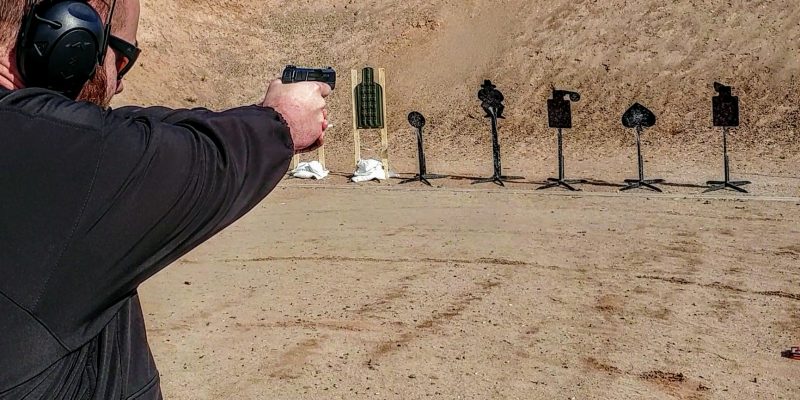 The 7 round slightly extended magazines offer a nice grip that fills your hand and makes the weapon comfortable to shoot. The grip is rock solid and is wide enough to fill your hand comfortably. The trigger is a smooth 5 pounds or so, and the trigger has a very nice reset. You can feel and hear it.

The safety is very tactile, and you can’t miss turning it on or off. The safety clicks into place without issue and it's very easy to reach with your thumb. The gun is extremely ergonomic and insanely comfortable in hand. I was pleasantly surprised by Mossberg’s little entry into the pistol market and to celebrate the release of the MC1sc, Mossberg even brought their first pistol, the Brownie, to SHOT show. 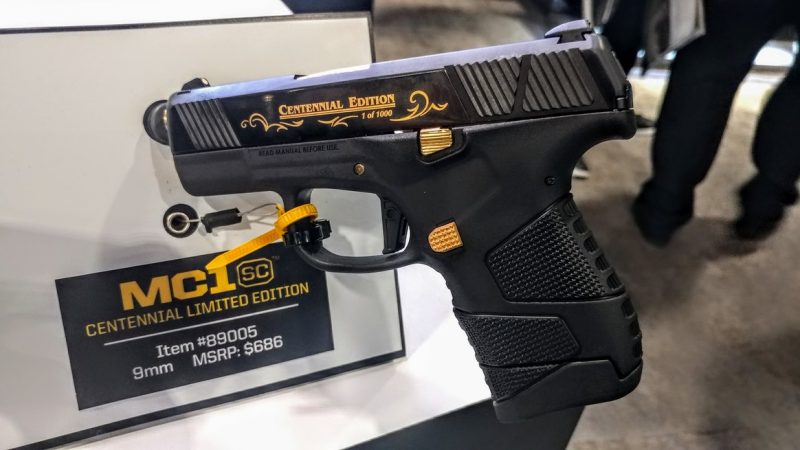 I think Mossberg has a real winner with the MC1sc and if they can get them on the market at a solid price, I can definitely see them becoming a popular gun. Mossberg does have excellent name recognition, even with non-gun people and I'm eager to get one in my hands for a long term use!

Check out our Facebook LIVE video from the booth, featuring the MC1sc's Safe Takedown System™ as well!