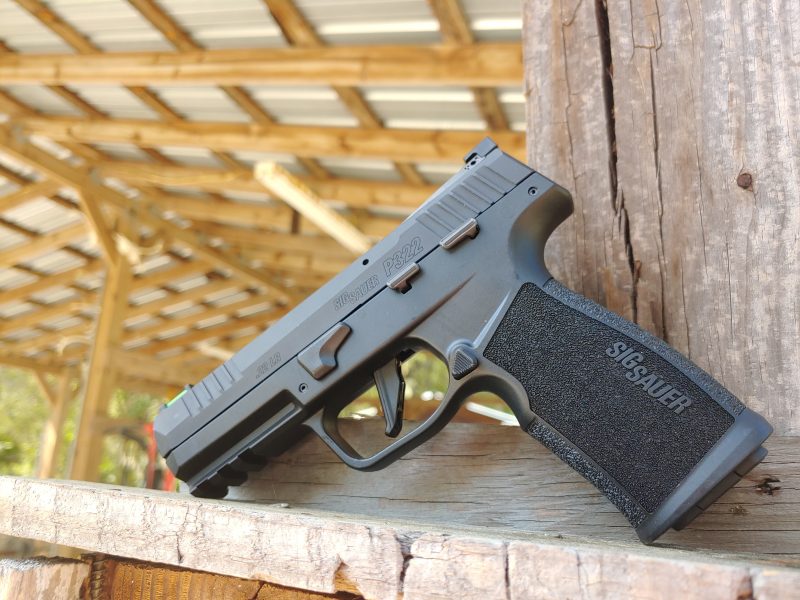 Companies making .22 LR variants of their firearms are nothing new. Walther did it, Glock did it, S&W did it, and the list goes on. When I first read about the SIG P322, I assumed it was a.22LR version of the P320. Imagine my shock when SIG designed a new, standalone platform in .22LR. The P322 doesn't represent any particular gun but is so modern and modular that it stands out in a busy market.

What Makes the P322 Different

The biggest thing about the P322 is that it's an entirely new firearm from SIG. On top of that, the P322 is a bit generic in design. I don't mean that as a bad thing, though. The P322 can easily stand in as almost any modern firearm on the market. Modern handguns all follow a somewhat normal path. They all utilize a polymer frame, a capacity of over 15 rounds, a striker-fired action, and similar configurations. 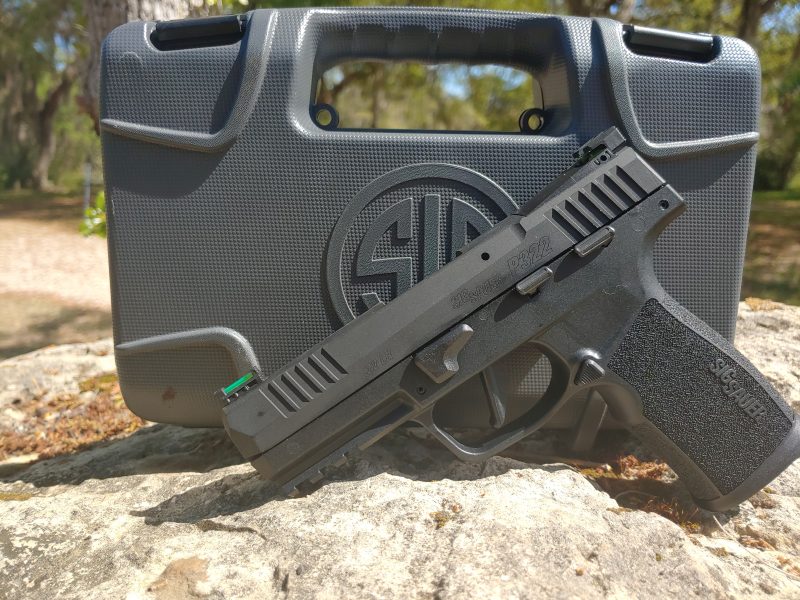 The P322 is a polymer frame handgun with a capacity of 20 rounds in a flush-fitting magazine. It's not a striker-fired gun but an internal hammer-fired single-action design that replicates a striker-fired trigger. It's 'compact' in size, making it roughly the same size as the P320C or Glock 19.

The P322 is a great stand-in for dang near any modern handgun and could easily replicate your pistol…even if it's not a SIG. This is a great all-around training pistol to copy your current firearm. Let's face it, .22LR is a heckuva lot cheaper than 9mm, and a training pistol can take you relatively far. 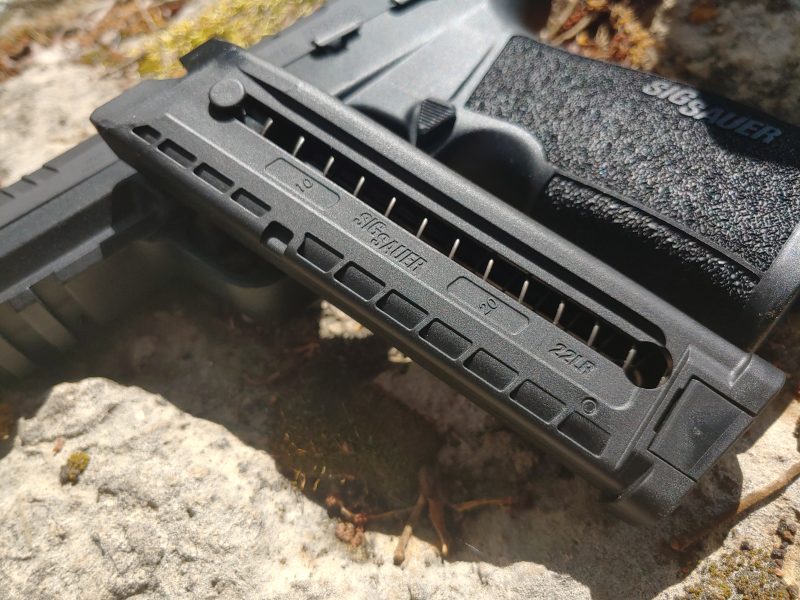 Beyond defensive training, the P322 offers you an excellent pistol for training new shooters. The low recoil, cheap ammo, and easy ergonomics make it a perfect handgun for taking new shooters to the range.

Where the P322 Shines

Beyond just being a modern P322, the little SIG offers you many different features we don't usually see on these modern .22LR pistols. This includes a feature I consider extremely important, and that's optic compatibility. SIG wisely built the gun to function with Shield RSMc pattern mini sights like the Holosun 507K.

The barrel is also threaded, although the threading sits flush with the end of the slide. SIG includes an adapter that makes it easy to attach your muzzle device of choice to include suppressors. The SIG p322 uses a fixed barrel, so adding suppressors with a recoil booster is possible. 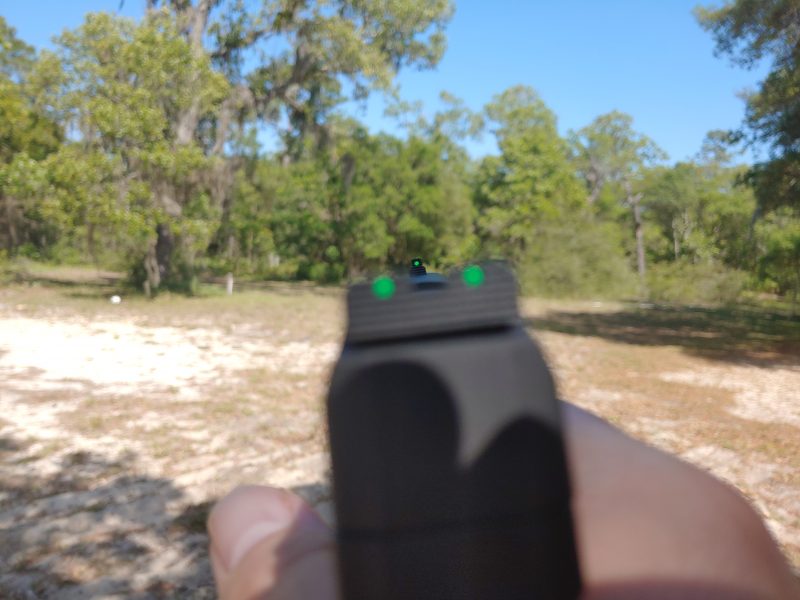 SIG includes two magazines with the gun and a magazine loader. This makes it easy to load the weapon, and trust me, after a few mags worth of shooting, your thumbs will appreciate it. The gun comes with a flat-faced trigger shoe that can be replaced with a curved trigger.

Finally, you have a rail system at the bottom of the gun. You probably won't use the P322 for defensive shooting, but that rail can be handy. Toss on the MantisX system, and improve your training even more.

I hit the range with a box of Federal Automatch, a couple of mags, and a few B8 targets. The P322 has some excellent ergonomics. The grip is relatively thin and fills my entire hand. It's textured well and fits just perfectly in my hand. I can ride the gun nice and high for maximum control. 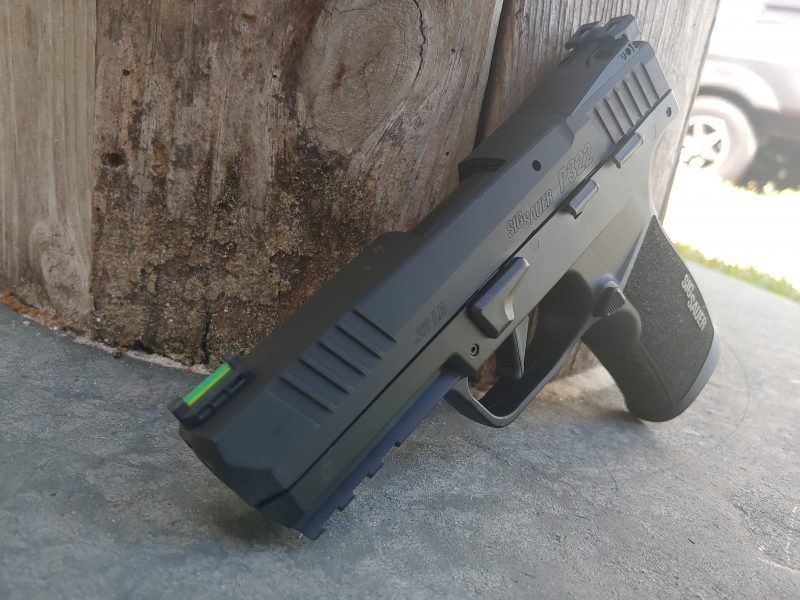 The safety is a frame-mounted thumb safety. It's fairly easy to engage or disengage on the fly. My big thumbs eternally pin down most of the time SIG's slide releases. The P322 is different, and my thumb avoids pinning it down. That's a nice touch and makes my reloads a little faster.

The P322 rocks out with huge sights. These green, high visibility fiber optic sights are adjustable and eye-catching. You can quickly find and align the sights with absolute ease. They make it easy to hit whatever your target might be. The trigger does leave something to be desired.

Pulling the SIG trigger shows that it's still a .22LR. To help ensure reliability, a .22 LR pistol needs a decisive hammer strike, which means you get a stiff trigger. The stiff trigger is evident. The trigger pull is somewhat long for an SAO design, and the takeup is quite heavy. Once you get past the takeup, you get a crisp wall. The reset is fairly long as well.

Once you get used to working it, you'll see plenty of accuracy. The gun makes it easy to print tight groups and hit targets near and far. 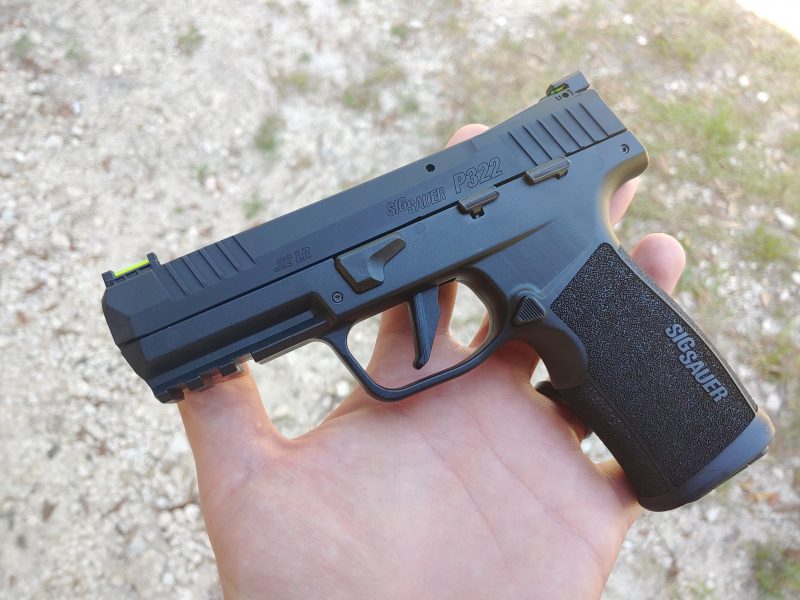 As you'd imagine, recoil is almost nothing. It's light, and the gun barely moves between shots. It is downright adorable. The little weapon barks more like a puppy than a pit bull. The P322 gives you a very nonintimidating weapon well suited for new shooters. My son and wife love it, and both engaged in some safe rapid-fire with giant smiles plastered on their faces.

SIG's little P322 is a fantastic firearm. It's well made, accurate, and plenty reliable. The P322 cycled everything I put through with the occasional bulk pack dud you've come to expect. Toss it and a few bricks of ammo in your gun backpack and you'll have a full day of fun. This is a very fun weapon that's modular, affordable, and perfect for shooters of any skill level.