The Jericho 941 - A Big Beefy Blaster 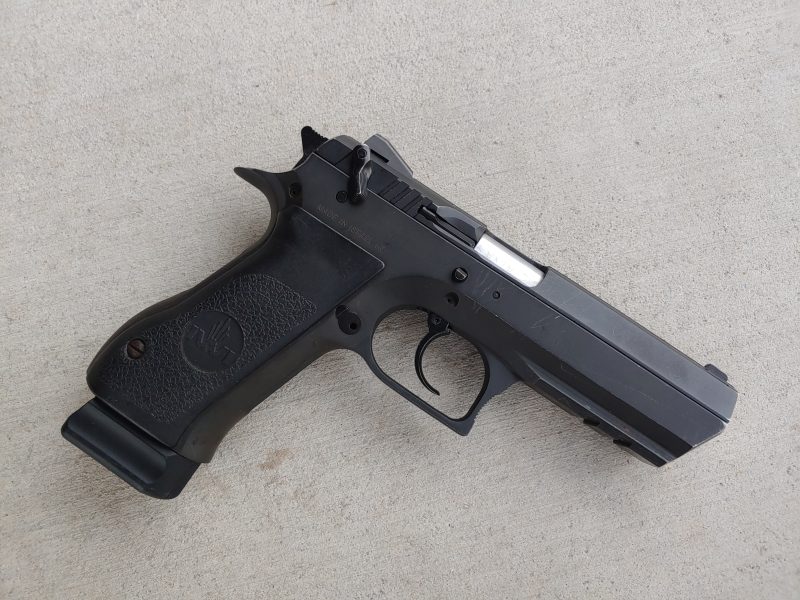 How many of us have a gun we don't really have a purpose for but just love to shoot?

I bet most of us own a gun or maybe two for that very reason. One of mine is the Jericho 941 in 9mm. It's a full-sized handgun with an all-metal frame that I don't use for concealed carry or home defense. It exists just to be fun to shoot, and that can be okay too. What makes the Jericho such a cool gun? Well, I'm confident by the end of this article, you'll get it.

Being Specific With the Jericho

Multiple companies have imported or produced multiple versions of the Jericho series of pistols, sometimes even under odd names. This gun has been imported as the Baby Eagle and the Uzi Eagle to help capitalize on the success of the Desert Eagle.

Some Jerichos have polymer frames and some have safeties on the frame and others on the slide. Some have rails, and some do not. To be specific, this is a Jericho with Baby Eagle markings, in 9mm, with an all-metal frame, a rail, and slide-mounted safety. Now that we all understand what is what, let's talk about history. 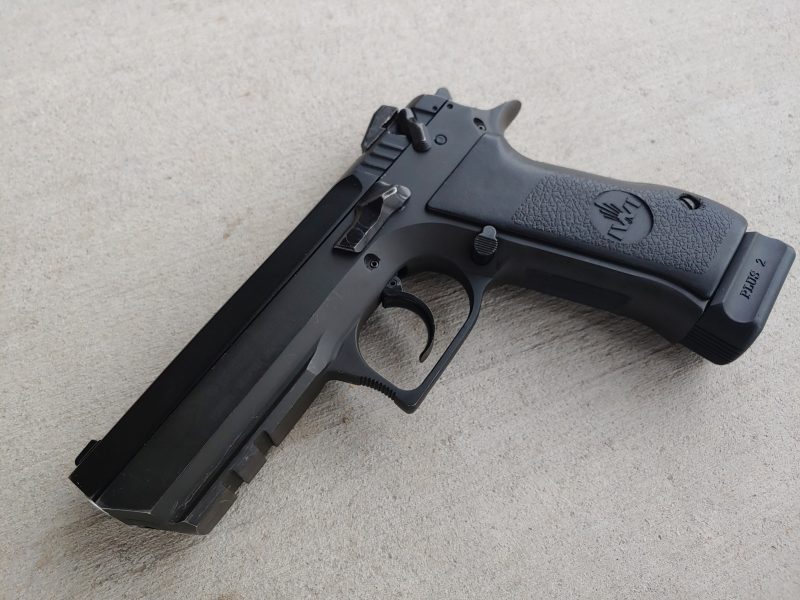 Israel needed guns. Specifically, they needed domestically produced guns. Relying on imports is a great way to end up under-armed. Instead of developing an entirely new pistol, they looked at successful guns they could more or less clone with available parts of magazines. The CZ 75 was a natural option, and the Jericho took its design from the CZ.

This made production easy and allowed for easy-to-acquire magazines. IMI did innovate with the Jericho by creating a new caliber called the .41 Action Express or .41 AE. This hot little round was pretty similar to the 40 S&W, and that's what put the 41 in 941. The round failed, but luckily those guns came with 9mm barrels and recoil springs too.

Breaking Down the Jericho

Since its lineage is tied to CZ, you can expect the ergonomics to be on point. The all-metal grip fits your hand so well. It allows for a nice high grip, and the beavertail allows you to press against the gun and keep it under control when firing. I understand the benefits of polymer, but I've never seen a polymer frame make a grip this comfortable.

The slide release is absolutely massive as well and very easy to engage. It also doesn't get pinned down by my thumb when I assume a thumbs-forward firing position. The safety is okay, I prefer frame-mounted, but the short slide on the Jericho makes reaching it easy enough. 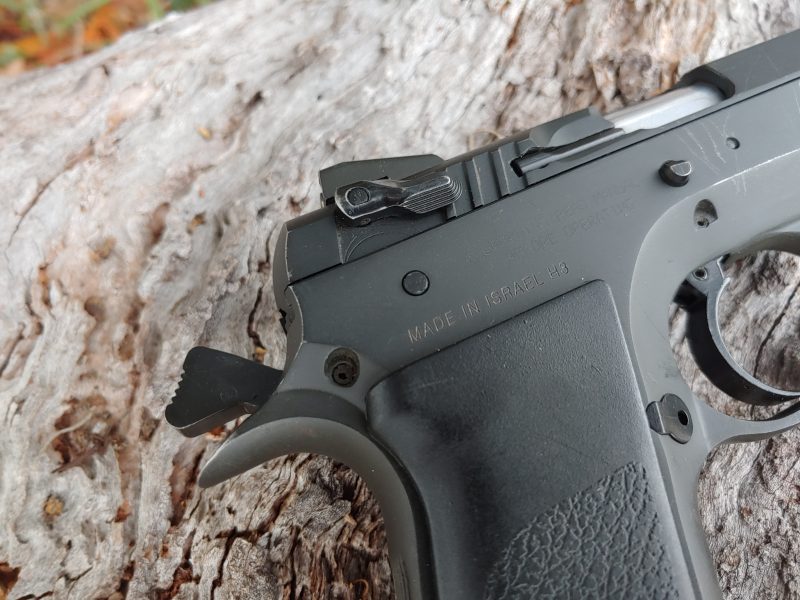 If you don't care for DA/SA guns, then Jericho isn't for you. It's a classic double-action / single-action design. The first trigger pull is long and heavy but smooth. The subsequent trigger pulls are nice and light.

This is a great big gun, and it weighs over two pounds empty. That's why I avoid concealing it. On top of that, it's fairly large and wide. It's a combat pistol designed for military and police forces. It's not designed for the everyday concealed carrier. That doesn't make it bad. It just makes it big and beefy. If you want to carry a Jericho, start here.

I love the Jericho for numerous reasons. First, it admittedly looks pretty dang cool. The gun is certainly distinct and not just a one-for-one clone of the CZ 75. It has an aggressive and modern look that is unmistakable. That's one reason, but not the most important.

The most important is that this gun is so dang easy to shoot. It's like training wheels as far as 9mm handguns go. That two pounds of metal weigh down on you and on recoil. There is very little recoil associated with 9mm already, so when you trim that recoil out even more, you get an ultra-easy-to-shoot weapon. 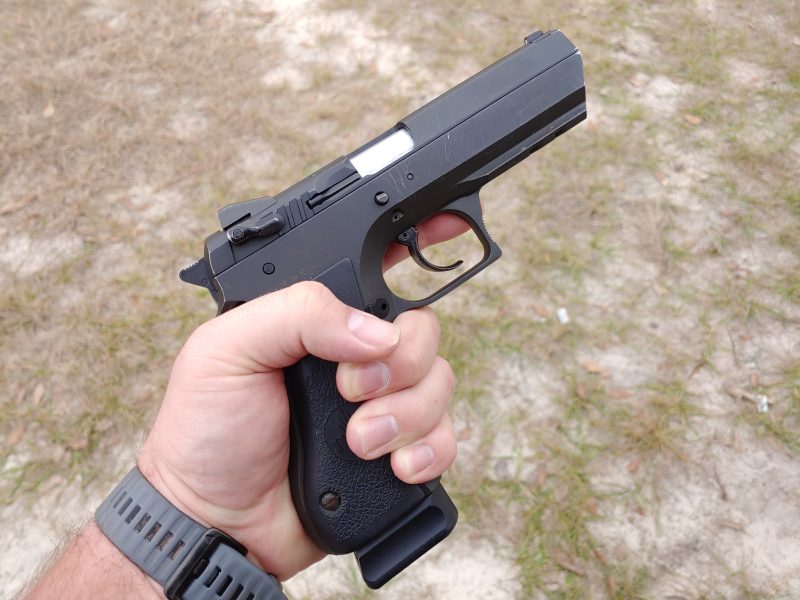 A nice high grip allows for excellent control on top of the already limited muzzle rise and recoil. This creates a gun that is very easy to control. This makes it so enjoyable to shoot. That extra size comes in quite handy.

I also enjoy the DA/SA design as well. I shoot these guns very well and very accurately. When I hear the ding of lead on steel, I get a big grin. Add in the accuracy with the easy control design, and we get a weapon that strokes your ego.

It's frustration free in the reliability department as well. It eats whatever and does so without complaint. The gun doesn't jam, fail to extract or eject, or anything like that. It just goes bang over and over again. The Jericho series are fantastic pistols that fall into an odd niche. 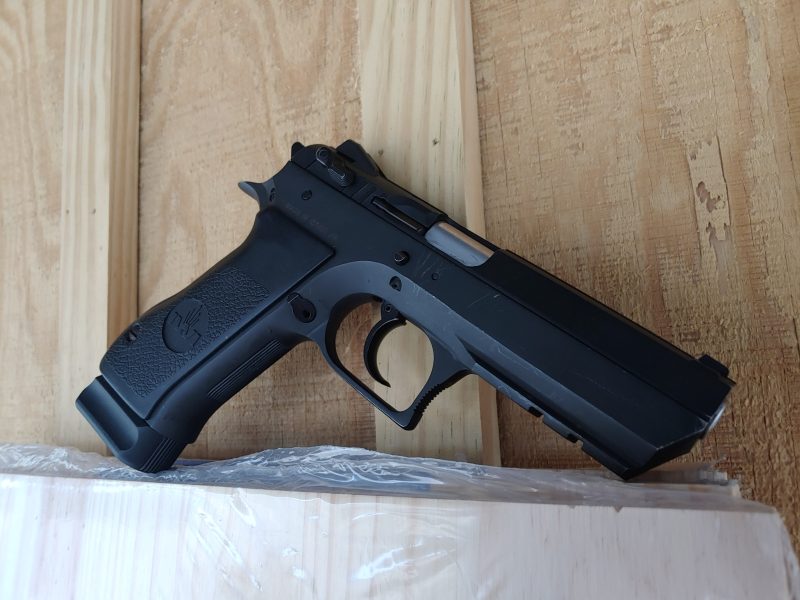 They are unrepentant duty guns and not for everyone, and that's okay.

The Jericho is my easy mode with a handgun. When I teach classes to new shooters, I start with a .22LR, but when it's time to move them to a new gun, I turn to the Jericho. It's the easy mode of fully powered handguns. Now I just wish they'd released an all-metal, optics-ready Jericho model. Then things would be off the chain easy.