The Future Is Now - 5 Sci-Fi Guns You Can Own 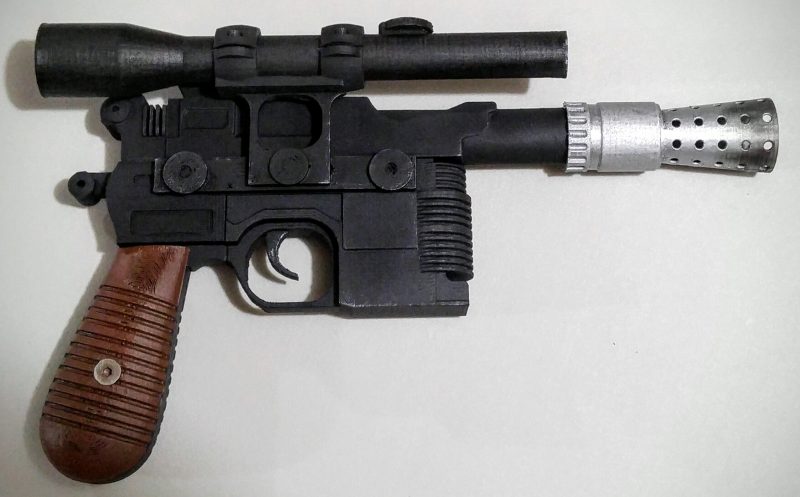 I'm a huge nerd. I love science fiction, science fantasy, and anything involving aliens, guns, and space warfare. It's a good time to be both a nerd and a gun owner. In the last few years, we've seen a ton of different guns that look like they came off the set of Battlestar Galactica or from the mind of George Lucas. Today we are looking at the top 5 sci-fi guns on the market. These aren't fancy, exotic, special operations guns, but firearms you or I could own right now. Let's dive into it.

The Chiappa Rhino is one of the older sci-fi guns on this list, but it's only about 14 years old. The Rhino is a revolver perfect for your next space western. It's a six-shooter that comes in various calibers, including 38/357, 9mm, 40 S&W, 44 Magnum, and more. How exactly can a revolver be sci-fi worthy? 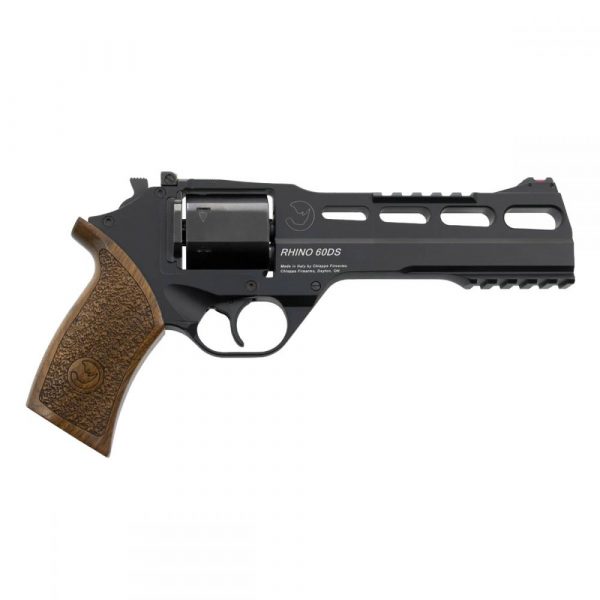 Well, the Italian designer took a different route with this gun. They designed the Chiappa Rhino to feature a barrel that aligned me with the bottom chamber of the cylinder. This lowers the bore axis considerably, and that helps align the recoil with your wrist. This doesn't reduce recoil but directs it almost entirely rearward instead of upward and reduces muzzle flip.

Due to the unique design, the hammer isn't a hammer. It's actually a cocking mechanism, and that's it. You can cock the weapon to single action, but the hammer doesn't lock back to fire the weapon. It just cocks the weapon. On top of that, on the full-sized models, the Chiappa Rhino features a light and optic rail to bring your revolver into the next century.

With a name like the Alien, then you know it's going to be one of the best sci-fi guns on the market. The Alien name comes from the fact it has a vague resemblance to the alien from the film Aliens film, series. It's sci-fi at first glance with the Laugo Alien. It meets the look test for a sci-fi gun. What about function, though? 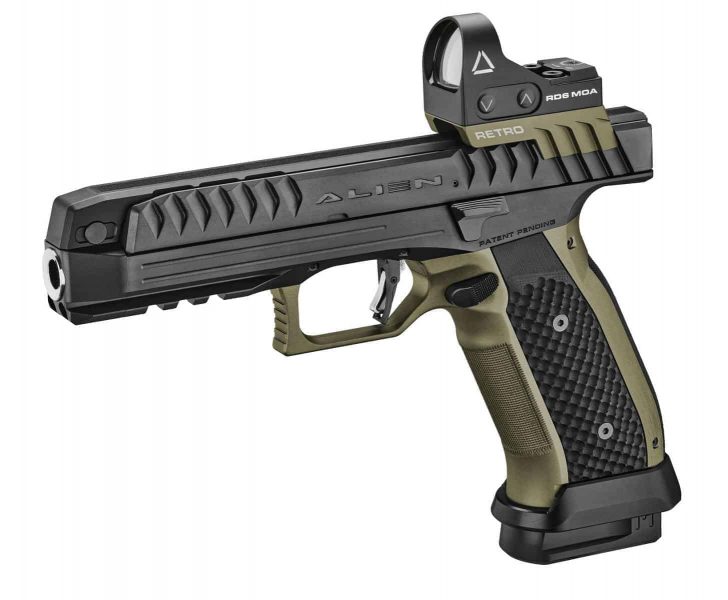 Well, the Laugo Alien does something similar to the Rhino, but in semi-automatic form. The barrel is pushed downward, and this lowers the bore axis to the point where it's essentially in line with the wrist. This reduces muzzle flip and increases your ability to get back on target. That tames muzzle flip, but the delayed blowback system helps reduce recoil and make the weapon even more controllable.

The front sight sits on a non-moving rail that allows you to easily track the front sight between shots. You can also toss a red dot on the Alien to take it to the next level, and you can switch slide-top rails for different sight or optic options. The Alien looks and feels like it took a Delorean back to 2022 just to visit.

We don't talk about BRNO…. Wait, wrong idea. Let's reset. The FK BRNO isn't just one of our sci-fi guns, but a new genre of pistol altogether. They call it a 'Field Pistol, and it's seemingly a pistol designed to allow shooters to reach well beyond normal pistol ranges with the 7.5 FK. The pistol and 7.5 FK are designed to reach out to 100 yards with their crazy flat-shooting design.

This is the pistol you take to fight in the trenches of a faraway planet. Maybe you're fighting the bug menace or dealing with cyborgs. It doesn't matter because you have an FK BRNO. The frame and slide design are entirely new, and the gun looks a bit odd with its large frame size in relation to its slide.

That's because the frame hides a proprietary recoil attenuating system that reduces recoil and makes the weapon a kitten, even when firing the powerful 7.5 FK round. Additionally, the gun is modular, and you can convert it to 40 S&W and 10mm. You can add optics, lights, and even a brace to get the most out of your field pistol.

Yeah, bullpup pistols exist, and they don't have to be giant arms pistols. The Bond Arms Bullpup is a fairly regular-looking compact handgun. Like all bullpups, the size of the gun shrinks due to the bullpup design, and the Bond Arms Bullpup has a 3.35-inch barrel, although its overall length is merely 5.1 inches. 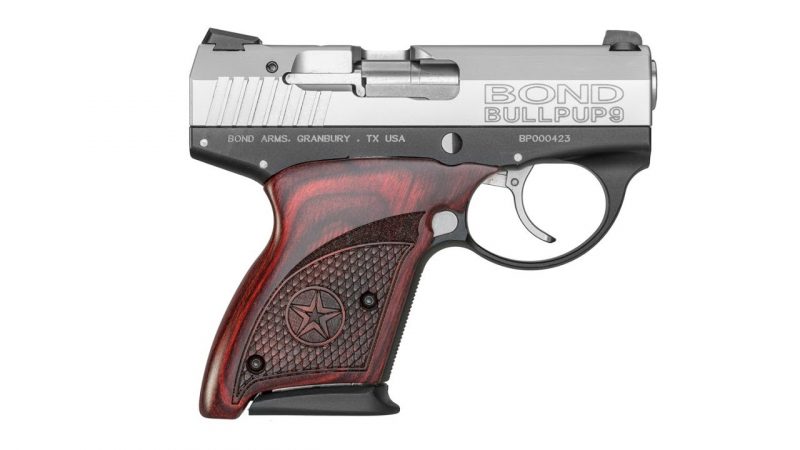 Sometimes concealable sci-fi guns are needed. Maybe you're a space detective trying to find where the Princess of Tangroian five went to. The Bond Arms Bullpup gives you a very easy to conceal firearm that still provides a fairly long barrel for its overall size.

Bullpup rifles have always been the future of gun design, for better or worse, and it makes sense that handguns should embrace bullpupness too. While this variant is compact, I'd love to see Bond arms take the platform to full-sized guns and produce Glock 34-sized firearms in the size of a Glock 19.

Oh boy, most of KelTec's weapons could occupy this list. They make some zany designs, and they often work. The CP-33 mixes old versus in their attempt to make affordable sci-fi guns. What's old? Well, the use of .22LR. That round has been around since 1884. What they did that was new was the design of the CP-33. 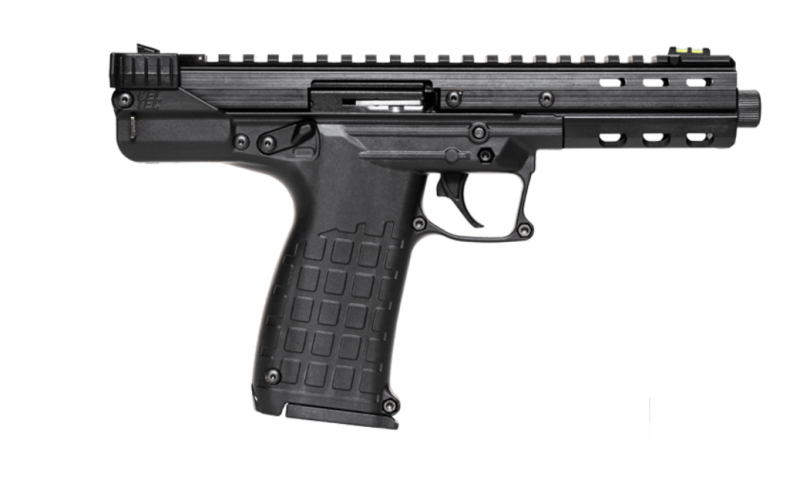 The 22 in the name represents the weapon's capacity with its quad stacked magazine. That flush-fitting design gives you tons of ammo for very little size. It's a fascinating design that embraces the weird and new. This is a huge pistol that looks like something the Borg would wield. There is no moving slide. Instead, we get a fixed rail to allow you to add optics wth ease.

A charging handle sits at the rear and is how the weapon is cocked and cleared. Around the barrel sits something like a handguard that gives you M-LOK handguard for mounting accessories of all kinds to the gun. Toss a brace on it, add a light, laser, and optic, and you have a handgun ready to deal with Stormtroopers, womp rats, Cylons, and alines of all types.

Sci-Fi Guns and You

Who doesn't think the future of handguns looks bright? Heck, we are seeing improvements to platforms as old as the double-action revolver. The idea that handgun design peaked couldn't be further from the truth. I embrace the future wholeheartedly, and I can't wait to see what comes next! These are my favorite sci-fi guns. What are yours? Let us know below!