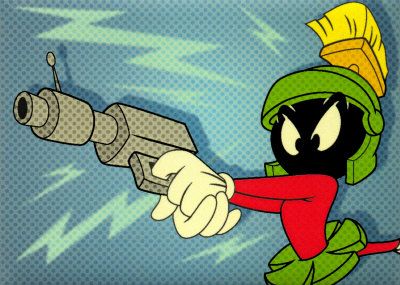 Okay, so Marvin the Martian isn't exactly a superhero, but he is in a comic, so does that count? If not, he will be very, very angry.

Lots of superheroes espouse guns, and that's easy to do when your eyes are lasers, or your hands have claws, or you can turn into a giant green menace that's invulnerable. While some superheroes say no to guns, plenty take a different route. Some use guns to supplement their powers. Others have zero powers and, as such, need guns to equalize the fight. What’s your favorite gun-slinging superhero? Here’s our top eight.

God made man, but Samuel Colt made them equal (to superpowers).

Blade's film and comic book adaptions both display a penchant for firearms. Of course, these firearms are specially modified to kill vampires with silver or even shotguns that launch full-on stakes. He turns many a vampire to ash with his gunplay, even though it's always over the top. 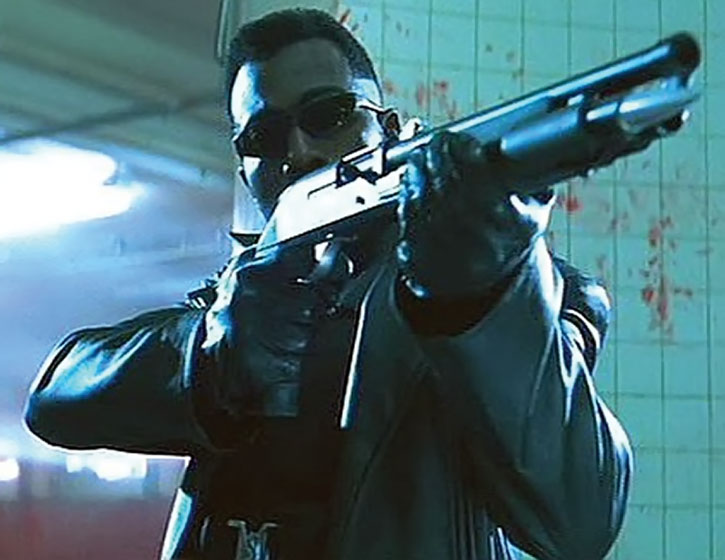 Of course, Blade also likes his swords and throwing weapons. He also has improved strength, stamina, and superhuman skill levels. This is one of the few characters who can believably fire and control a machine pistol with a single hand. Blade is certainly not a character to hold back regarding firearms, and they make him better as a superhero.

The Punisher has no super strength, no healing factor, and no super-soldier serum. He's just a dude with guns. He's also a highly trained Marine who likely has some mental health issues and a touch of PTSD. He uses all manner of weaponry throughout his comic and film appearances, from a little .380 to a freakin' handheld minigun. As a superhero, he's all about the guns. 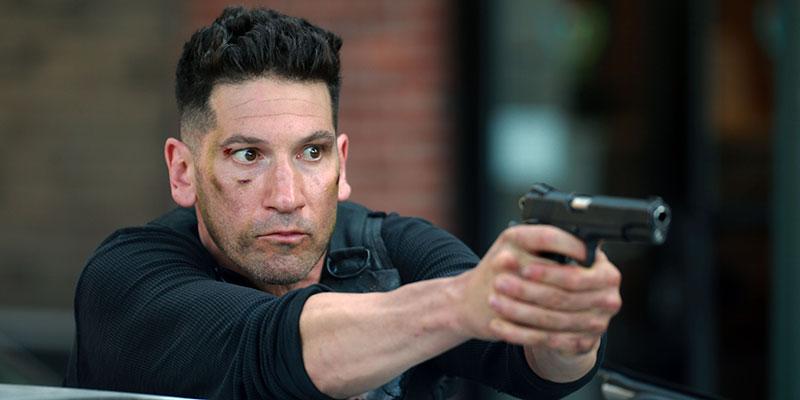 One consistent preference Frank Castle has is the M1911. He tends to stick to the old Browning design throughout the comics and films, and even the TV show. The guns range from custom M1911s to Kimber Warriors to crazy comic book configurations, but they are consistently 1911s.

Femme Fatale Black Widow has graced comics, tv shows, and the MCU. She doesn't rely on superpowers to win the day but on cunning, guile, martial arts, and guns. How else could a superhero keep up with the likes of Captain America, the Hulk, and Thor? Different incarnations utilize different guns. 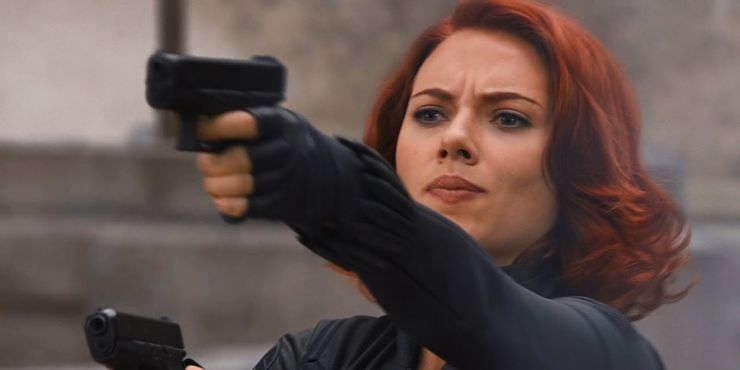 Some comics show her sticking with Russian-made weapons since she was a Russian spy. This includes the Markov and Stetchin pistols. In the films, she's dual-wields Glock 26s with great skill. Black Widow mixes in plenty of skills, melee weapons, and a mix of high-tech weaponry on top of her favorite firearms.

Different versions of Iron Fist focus on different weapons or martial arts. One incarnation, Orson Randall, used guns. Not just any guns, but guns he infused with 'Chi' to enhance their powers and generally act as a great do-it-all tool for the character. As an armed superhero, this is one of the few that mix superpowers and guns together. 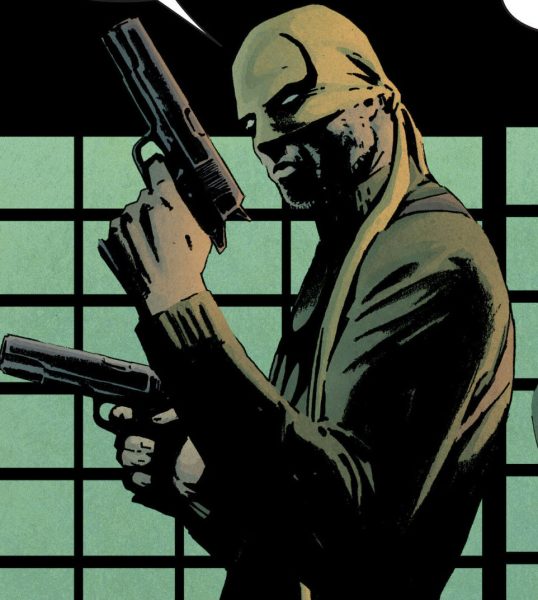 These 'chi' pistols are a pair of Colt M1911A1s that glow yellow when infused with Chi. Surprisingly enough, these pistols made an appearance in the Iron Fist Netflix series in the hands of Danny Rand. It's nice to see these old guns kicking. The real question is, does the chi add stopping power?

Moon Knight's Netflix show gave him zero time with firearms. Marc Spector was a US Marine and mercenary who had a real love of firearms. As a character, Moon Knight was the same type of killer as Punisher, but when appropriate, he broke the guns out. 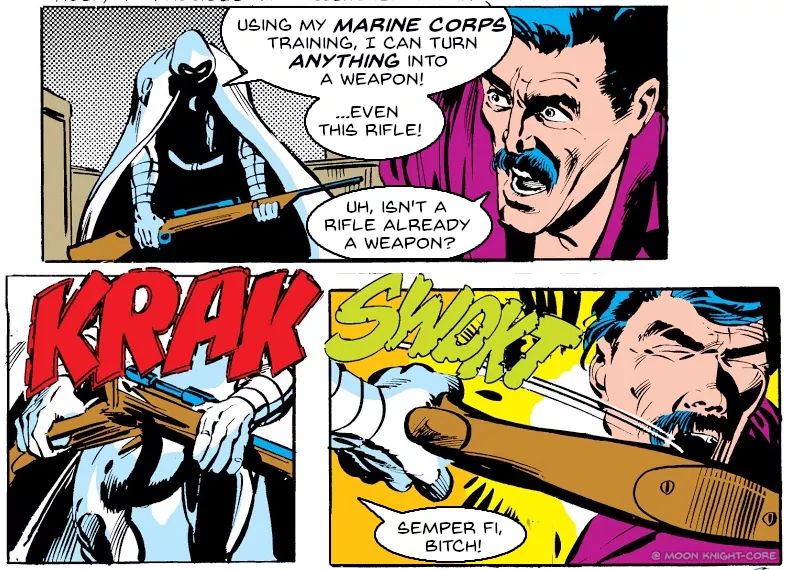 What guns does our superhero wield? Well, a good mix. We see rifles, including AR 15s and AKs. He carried machine guns and a few handguns. Although most of the guns he uses are highly imaginative comic book guns, nothing we see a parallel with in real life.

The mercenary with a mouth barely qualifies as a superhero. He's more of an antihero with superhero tendencies. Before Wade Wilson became Deadpool, he was a spec ops soldier and a mercenary. Like most mercenaries in comic books, he became a superhero. Deadpool has an accelerated healing factor that makes him nearly invulnerable.

As such, he often flies into situations, guns blazing. His guns of choice vary widely, and in the comics, they can be rifles, machine guns, or SMGs. In the films, he preferred his massive Desert Eagles, which make sense for a mentally disturbed hero whose a bit zany. A pre-Deadpool Wade Wilson preferred a Para Ordnance P14.

Everyone kind of forgot about the 2010 Jonah Hex movie. In all fairness, it wasn't great. However, the Jonah Hex comic series mixes superheroes, supernatural, and cowboys. If you do anything with cowboys, then you have to have firearms. Jonah Hex prefers his single-action army, specifically the calvary model. 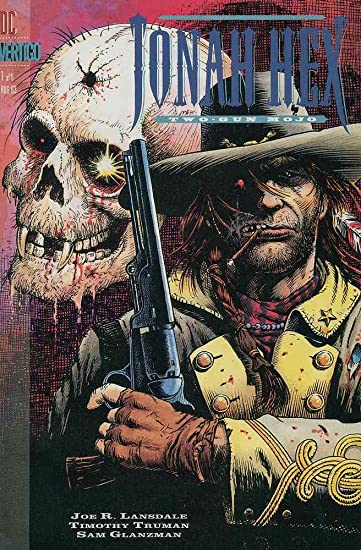 In actuality, he prefers two of them. He wields them with gusto and in a relatively unbelievable way. His aim is, of course, impeccable. To be fair, I don't need a grounded in a film involving a cowboy who can bring people back from the dead. I wish hex would get another chance, maybe as a superhero TV series where he dispatches justice across the west.

Peacemaker was an obscure Charlton Comics character purchased by DC and left to rot only until recently. His appearance in Suicide Squad and his own TV show has made him a household name in superhero comedy. He might be massively muscled, but his only superpower is remembering metal songs. 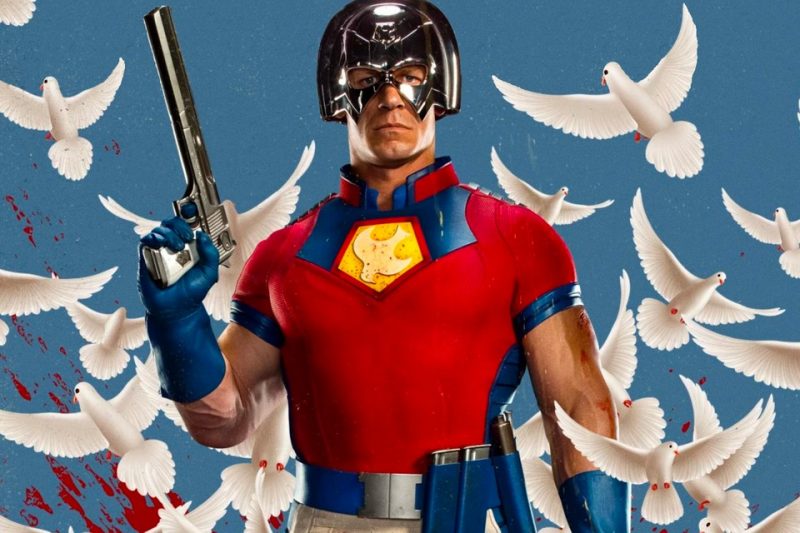 What Peacemaker has is a high-tech helmet and a gun. Specifically, a Desert Eagle with an extended barrel and slide makes it even more ridiculous. We do see him kill plenty of aliens with a KSG in the series. The show and movie are ridiculous, and the action is equally ridiculous, so don't expect good gun handling.