Have you ever been short on cash? Most adults have at some point or another. As a young Marine, I may have carried the world's best medium machine gun, the M240B, but I couldn't afford the best-concealed carry handgun.

Back then, I was able to fit a Taurus PT111 New Millenium Pro 9mm handgun into my limited budget. These days, while I'm blessed to be able to choose pistols from Glock, CZ, and SIG, I know they aren't options for everyone.

This is where pistols like the G2S from Taurus come into play.

The G2S is one of the most economical guns currently on the market. It costs less than 200 bucks at most retailers, including Palmetto State Armory. The G2S is a single stack handgun that comes in 9mm and 40 S&W. I have the 9mm variant. It also comes in a few different colors and finishes, but black on black is the cheapest. 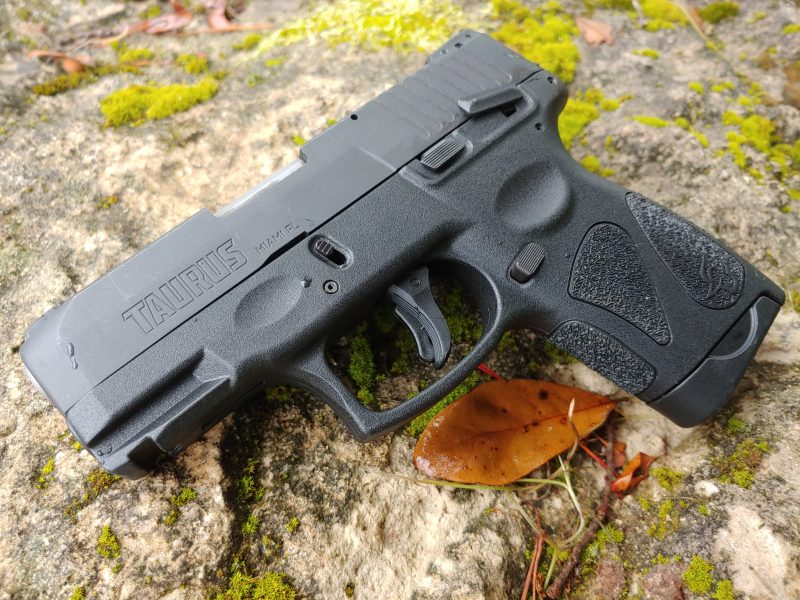 In 9mm, the Taurus G2S holds seven rounds in the magazine and comes with two magazines in the box. It's a small, relatively lightweight gun that's heavy for its size but still light enough to carry with ease.

The G2S has a Picatinny rail for accessories and features adjustable sights, manual safety, and a trigger safety. The gun itself doesn't do anything crazy innovative or new with the striker-fired handgun, but it is a good looking, small weapon that's easy to shoot.

Breaking Down the G2S

What expectations can you have for a handgun with a pricetag under $200? At the very least, it needs to be a reliable pistol. A gun that goes bang with each pull of the trigger. The G2S checks this box, although when I first started shooting it, I experienced a total of 4 failures using the cheapest ammo I could find. 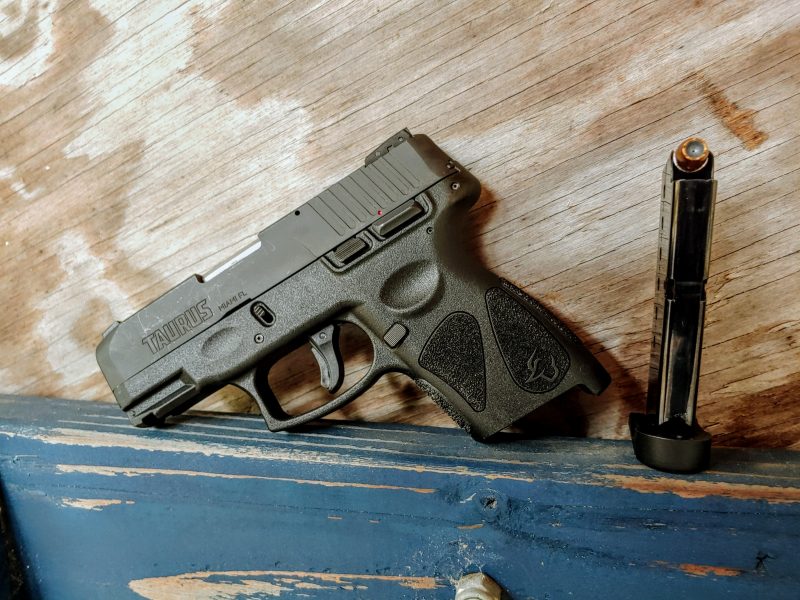 Two were failures to extract and two were magazine-induced. The magazine's follower failed to feed the next round into the weapon. This happened with a single magazine and these failures occurred within the first 200 rounds. Following this, I cleaned both the gun and magazines and the G2S has run without issues ever since, even with cheap, crappy, steel-cased ammunition.

In my experience, the G2S is a gun that runs consistantly once it works through some growing pains.

How Does the G2S Handle?

As a mid-size subcompact gun, it's not as small as some pocket 380s but it's also not as chunky as a Glock 26. Each magazine has a built-in pinky extension that is a must-have to achieve a full grip. The pinky extensions also have a slight cut out that makes them easy to grip and pull from the gun should the magazine get stuck.

While I don't prefer my handguns to feature safties, I admit the Taurus is at least well-placed and easy to use.

The grip is blocky and not exceptionally ergonomic. It’s like holding a small board, making it far from perfect. It's not uncomfortable but a lot of companies have designed much better grips. 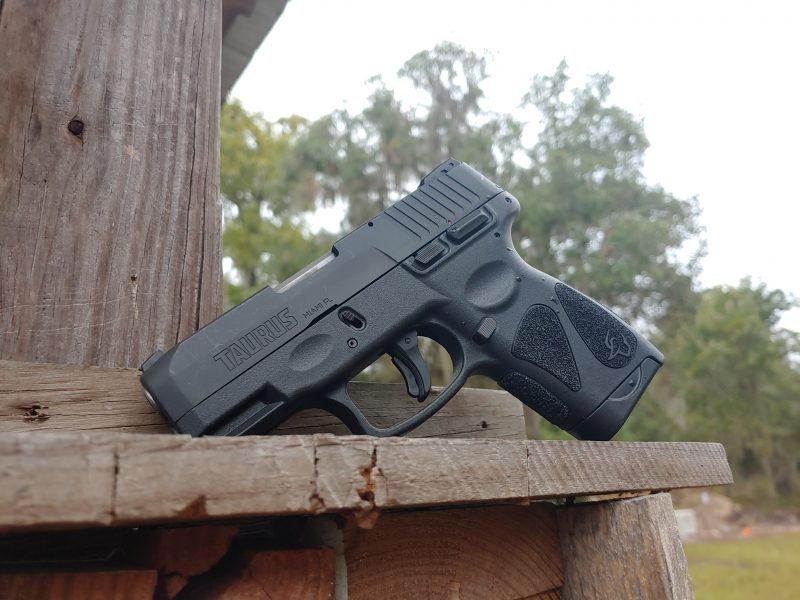 The Taurus G2S has one serious ergonomic downfall: slide bite. I like a high grip and with that hand placement, the slide takes a nasty bite out of my hand. After a hundred or so rounds, it drew blood. This is the curse of a big man's hands. I’m no hand model, my money is in my hair, but I still don’t want to leave the range looking like I'm sponsored by Band-Aid.

An easy fix would be an added beavertail or extending the rear of the frame just a bit. Several handguns have figured this out, so being small isn’t an excuse. 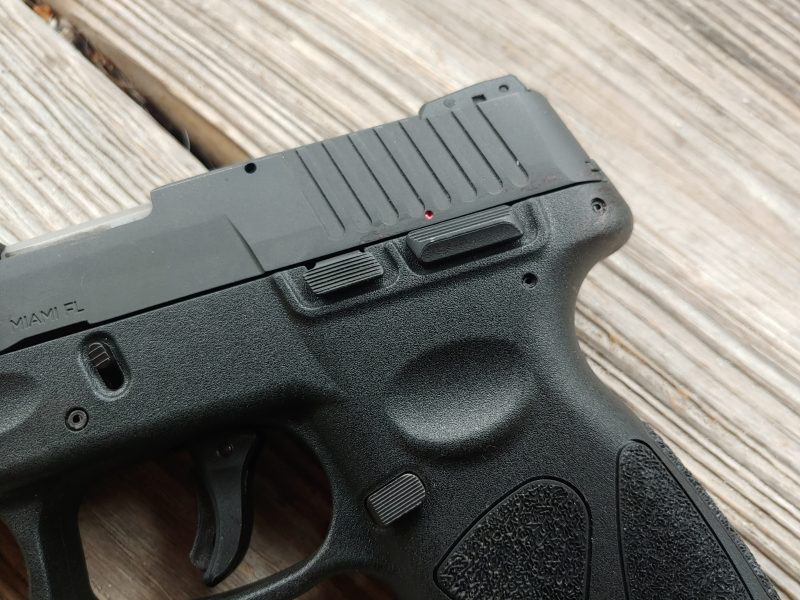 Recoil and muzzle rise is minimal. It's not going to smack your hand, but don't expect it to shoot like a full-sized gun. Using standard self-defense ammunition, you won't have any issues putting multiple rounds into your target rapidly. The G2S jumps a bit but it doesn't jump around like a rabbit with a dog after it.

The G2S also has a unique trigger system. It is technically a DA/SA design, but there is no way to decock the striker from single action to double action with a chambered round. So what you have is a single action with the ability to restrike a cartridge should it fail to fire. Restrike ability is a nice touch when faced with ammo with hard primers, IE Monarch ammo from Academy.

The trigger is long - not heavy but very long. It's gritty and rough, and it has a long wall where the trigger gets consistantly heavier. Not enough to affect your accuracy at standard handgun ranges but when compared to more refined triggers, you'll notice a difference once you get to out to 25 yards and beyond. 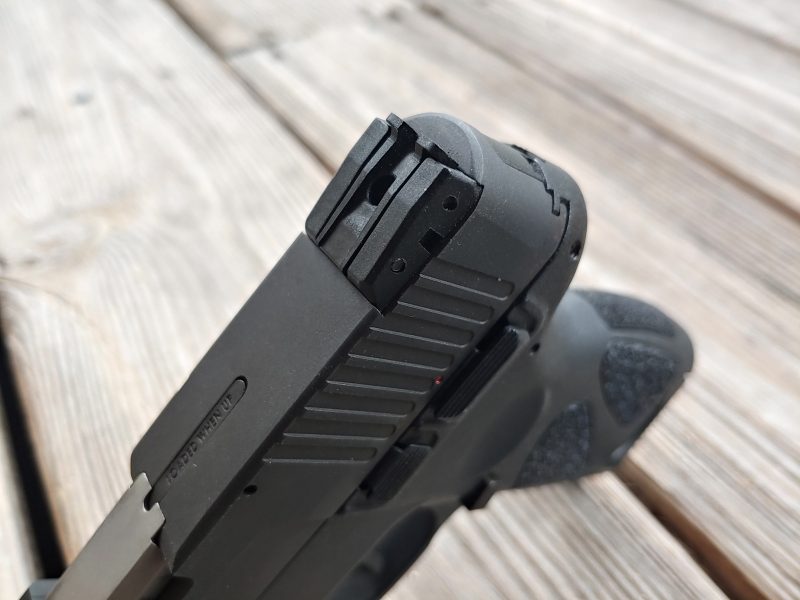 On a man-sized target at 20 yards, I could toss rounds into the chest without much of a challenge. Beyond 20 yards, you start to lose some practical accuracy. The sights are very basic, just a three-dot design and the rear sight is fully adjustable.

The Taurus pistol is plenty accurate for self-defense use. Rarely does a self-defense encounter go beyond 20 yards and if it does, you could probably make a safe getaway. If not, aim true and carry a spare mag. That should get you through the day.

A Quality Carry Pistol for Under $200?

If I was still a young, broke Marine, I'd carry the G2S. It's a good, economical, concealable gun more than capable of defending your life. With a sticker price of under 200 dollars, you can still afford a quality holster and self-defense ammo to boot.

That's what I call a Win/Win!