After much anticipation, Springfield Armory unveiled the Hellcat, a high-capacity micro-compact marketed and designed for concealed carry.

As expected, the launch of the Hellcat was greeted with mixed reviews from the public. Social media was instantly inundated with comments ranging from political to practical to preposterous.

However, the reviews have been steadily rolling in from industry insiders who were able to get their hands on Springfield's new micro-compact 9mm.

How does the Hellcat stack up with those in the know? 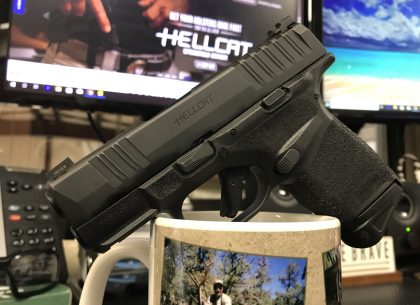 Here's a sampling from gun reviewers across the industry:

The Truth About Guns:

Ratings (out of five stars):

Ergonomics: * * * *
It’s both comfortable in the hand and easy to shoot. The only downgrade here is for the serrations in the Melonite slide which just aren’t grippy enough.

Concealability: * * * * *
This is a very easy gun to carry. As someone who totes a slim, single-stack G43 daily, the Springfield Hellcat gives me five more rounds in virtually the same size and form factor. That’s a big capacity upgrade and one that won’t be lost on most gun buyers.

Overall: * * * * 1/2
Going back to the beginning, Springfield Armory — like so many gun makers — is playing catch-up to the P365. This is an extremely attractive, competitively priced micro-compact that gives the gun buyer more carry capacity and does it in a package that’s easy (and even fun) to shoot.

In the end, the Hellcat is an extremely attractive concealed carry package. Springfield took a couple of years to come up with an answer to the SIG P365 and you can see the work that went into the final product. The Hellcat is a very worthy competitor to the SIG and one that many buyers will think is the more compelling choice.

The Hellcat’s flush-fit magazine will carry 11 rounds, while the P365 holds 10. The extended magazine, included with the Hellcat, takes capacity to 13 whereas the P365’s next-up magazine holds 12.

Springfield Armory achieved this capacity gain by accident. Reportedly, an engineer was only tasked with matching the P365’s capacity while respecting SIG Sauer’s three magazine patents. He returned to the project manager later and asked, “Is it OK if it holds one more round?” It wasn’t a joke. No matter how they looked at the design, there was room for one more while maintaining reliable functioning. 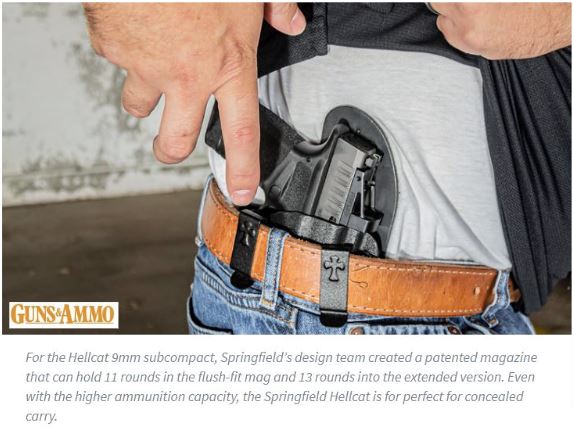 The Hellcat’s textured surfaces improve on the ergonomics of the P365 with texturing on the Hellcat’s thumb shelves (above the reversible magazine release). This texture also appears above the trigger guard where your idle trigger finger would naturally rest between volleys or your support-hand thumb on the opposite side. With the two pistols side-by-side, you can’t argue that Springfield Armory did a more effective job at covering the frame with textured touchpoints.

As a result of our tests, Guns & Ammo Staff has determined that grip angle is a subjective preference despite a company’s marketing. Regardless of your opinion, the Hellcat manages to transcend those advertisements and pleases virtually everyone.

Meet the Hellcat, the highest capacity micro-compact available, new from Springfield Armory. Available in a standard or optics-ready (OSP) configuration that comes with both an 11+1 magazine and a 13+1 extended mag. Gun Talk's Ryan Gresham shows off the different features of the Hellcat and then meets Kevin "KJ" Jarnagin at the range to compare it with Sig Sauer's P365.

Industry insiders who've had their hands on and ran ammo through the Hellcat appear to be cautiously optimistic, seemingly unable to mask how impressive this little micro-compact from Springfield really is. By all accounts, this plucky little pistol, if given a chance, may find a home in more holsters across the country.

What do you think? Have you given or do you plan on giving the Hellcat a shot?

Jacques has hundreds of hours of firearms training under her belt including Street Encounters and Low Light/No Light Training, is a graduate of the Gunsite Academy, and was named a S.A.F.E. Summer Local Champion of Firearm Safety by the National Shooting Sports Foundation's Project ChildSafe. A staple in the firearms industry since 2009, Jenn is proud to be raising her three children with her husband John who is also an avid hunter, 2A supporter, and an amazing father.