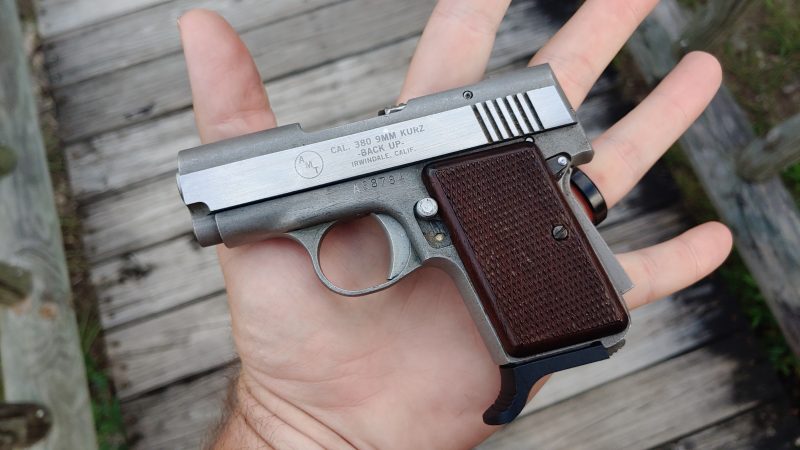 Pocket pistols are nothing new. But you might not know about the awesome AMT Backup .380 from the late 1970s.

Arcadia Machine and Tool, aka AMT, produced a number of innovative firearms in their short lifespan. This includes a number of 1911s, including the famed AMT Long Slide, AMT Accelerator, and my favorite, the Javelina. Alongside all these 1911 clones saw the AMT Backup. The AMT Backup is a fascinating little pistol first designed in 1978. What’s fascinating about the AMT Backup is the fact that it’s the first pocket-pistol-worthy .380 ACP.

These days pocket pistols are a dime a dozen, and guns like the Glock 42, the Ruger LCP, the S&W Bodyguard, and a dozen more I could list. These guns didn’t become popular until the early 2000s. 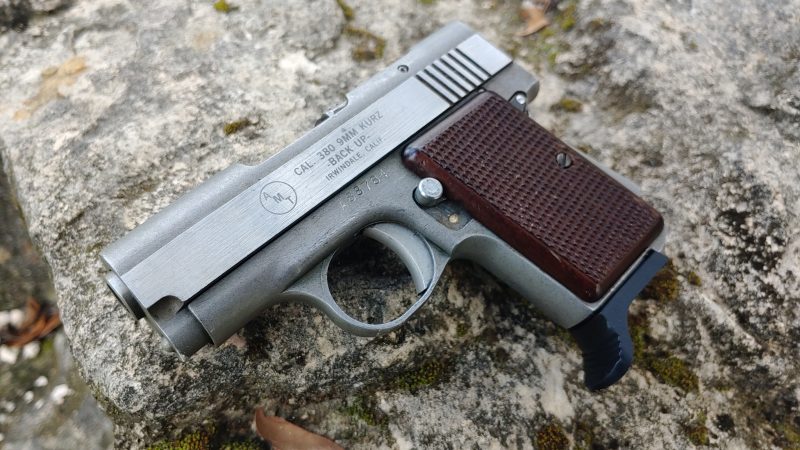 The AMT Backup is certainly a product of its time. While it’s perfectly sized for pocket carry, the AMT Backup is still made entirely from metal. It’s a hefty little gun, but a little heft isn’t so bad for a direct blowback handgun.

The AMT Backup is a teeny tiny gun with a short 2.5-inch barrel, an overall length of 5 inches, and a height of 4.1 inches. It’s small but a little thick compared to its polymer descendants. The gun is a quarter-inch thicker than the LCP and not much different in size. It’s a fair bit heavier than the polymer models on the market as well and comes out at 18 ounces. 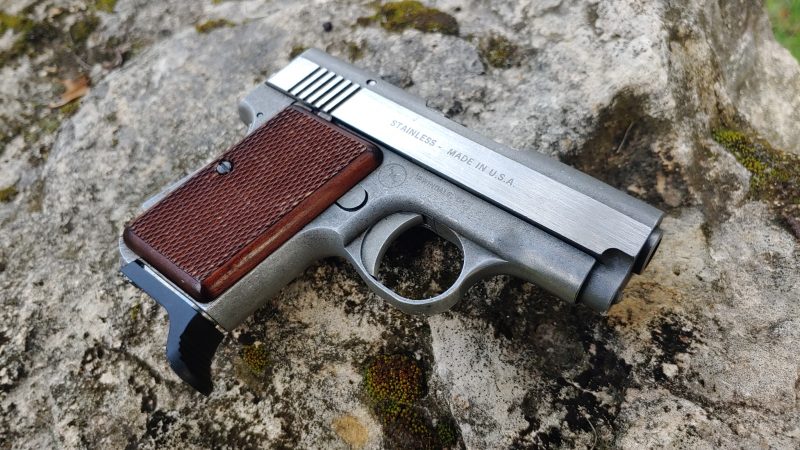 The gun was designed for deep carry, and therefore it features some interesting features. First, AMT trimmed off traditional sights and left you with a trench sight. If you’ve never seen one, a trench is exactly what it sounds like. It’s a trench dug into the slide. Line that up with your target and hope you hit. It’s minute of bad guy accurate and won’t ever be mistaken for a marksman’s pistol.

The magazine release is a heel-style design that was more popular in Europe at the time. It’s also simpler and makes the gun cheaper to produce. Where the magazine release would normally be is a manual safety that slides up and down. Press it down to fire and up for safe. Additionally, a grip safety sits on the back of the gun that’s very 1911 like. 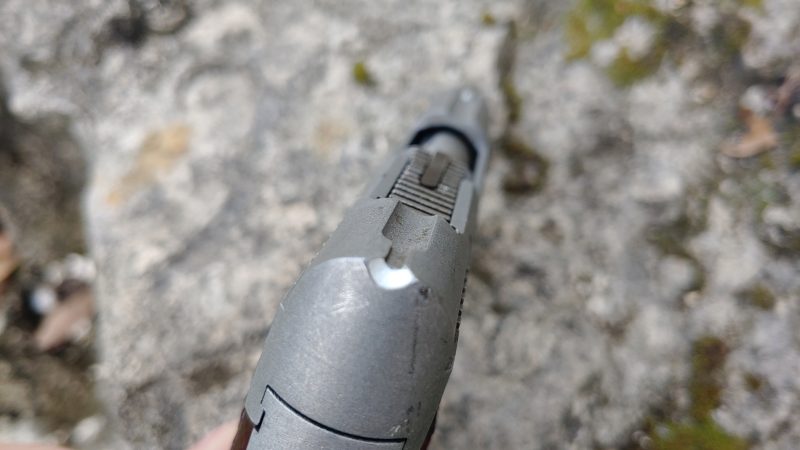 The AMT Backup is a striker-fired pistol, so there is no hammer, and in that way, it’s one of the few metal frame striker-fired guns. Capacity comes out to 6 rounds, which does keep it in the running with modern pocket pistols. The AMT Backup also has a pinky extension...but it’s not quite big enough to be useful.

The gun uses a direct blowback action which is a simple and acceptable system, but it’s not without its flaws. First, it requires a very heavy recoil spring, and that makes chambering a round and cocking the weapon somewhat difficult. If you have reduced hand strength or an injured hand, good luck. 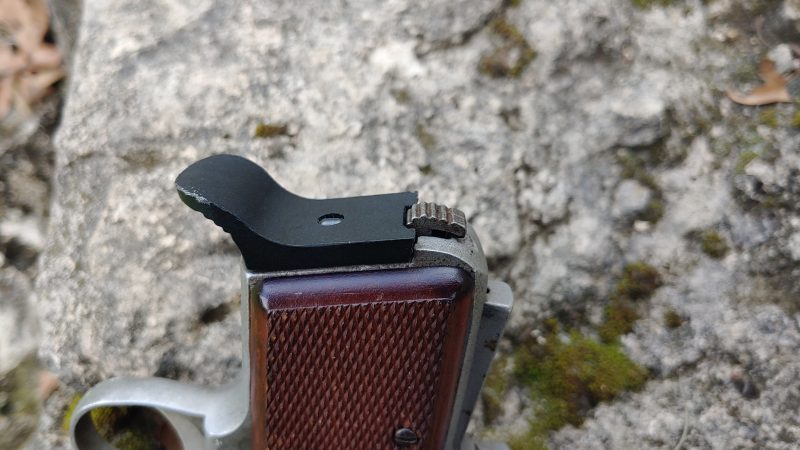 Second, it also features some harsh recoil. It’s the downside of direct blowback, and that means this .380 ACP has some sting to it. Each shot feels like a solid high five from a guy who tries a little too hard. The trigger is okay. Its light has a fair amount of take-up and a stiff wall.

The trench sight, well, it kind of sucks. It makes shooting at anything beyond super close range difficult. It makes me feel bad about my shooting skills, to be honest. I can hit the bad guy target, but lord forbids I needed to do so at any distance beyond 15 yards or so.

As you’d imagine, this wasn’t a gun designed for fast reloads, and the heel magazine release makes things tricky. If you’ve fallen back to your backup pistol and expend six rounds and fail to stop the bad guy, it might be time to run. I’m shooting some basic hardball .380 ACP, and the gun runs mostly fine. 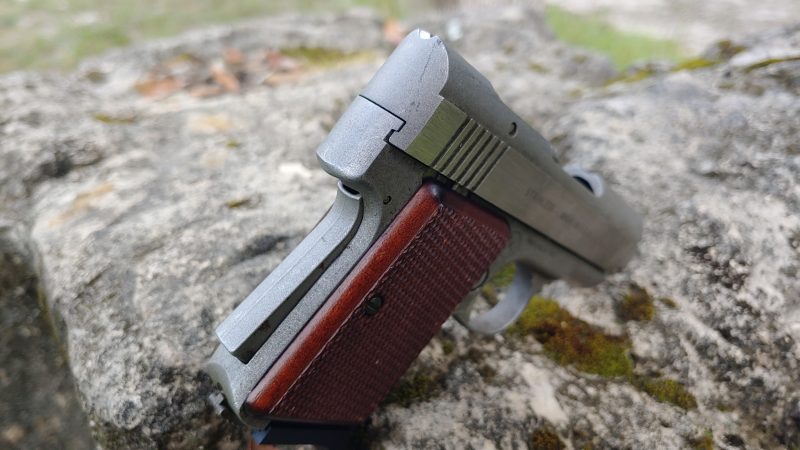 I’ve had the occasional failure to eject over the years. It’s less reliable than most modern pistols, and I wouldn’t advocate carrying it for self-protection. The AMT Backup is a fun little gun that shows the beginning of pocket pistols and how they evolved to the modern firearms we know and love these days.

As a product of the late 70s, it’s tough to hate on the AMT Backup. It was a novel idea for the time and a neat little collector’s item. It’s insanely cheap on the used market, and I picked mine up for 100 bucks at a local gun store. At that price, it’s a fun gun, and that’s perfectly fine. If you want a .380 ACP for carrying, consider the LCP 2, the LCP Max, or any other modern option. If you want a gun with some history, check out the AMT Backup .380 ACP.