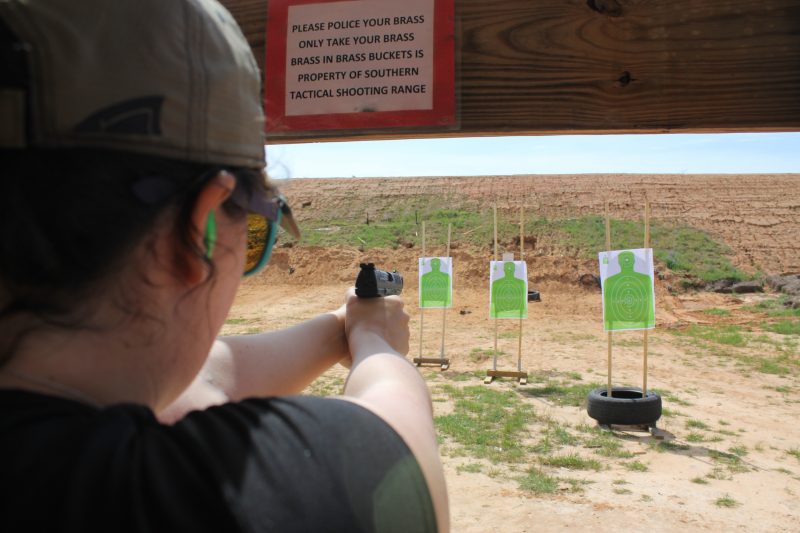 Whether you’re a new gun owner or not, firearm skills need to be trained and honed. Shooting a pistol properly is one of the most perishable skills there is. You’re never too good to train or take a firearms class, no matter who you are.

Here are 10 firearm skills to train in the New Year:

1. Draw from a Holster

How many times have you practiced drawing from a holster? If you can count the number of times on one or two hands, it’s time to put in a lot more effort.

Many firearm instructors recommend a carry gun without an external thumb or grip safety because the average gun owner doesn’t practice enough to remember to disable the safety under duress. Drawing a weapon out of a holster needs to become a habit, but more importantly, it must be a consistent, correct draw. Nothing is worse than forming bad habits and having to relearn them later. 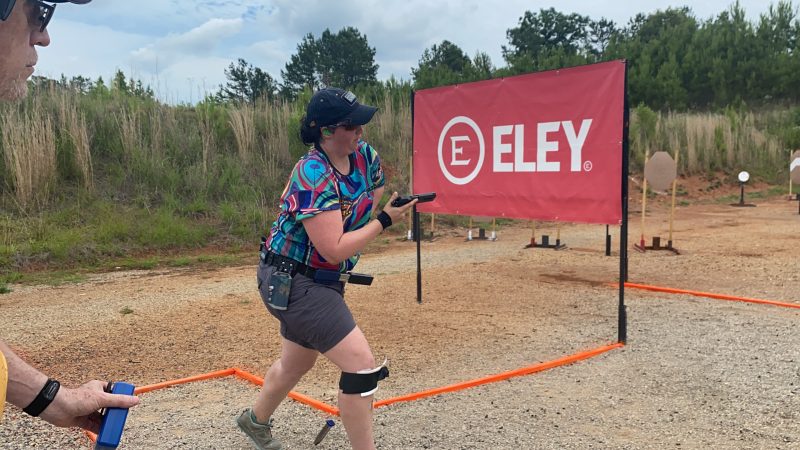 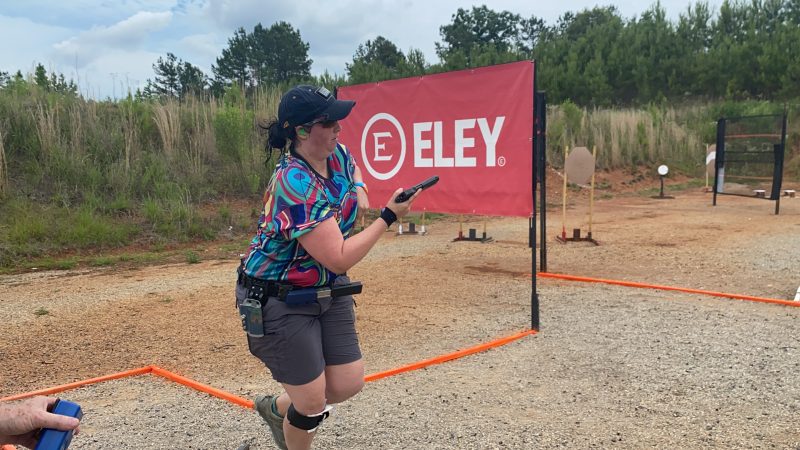 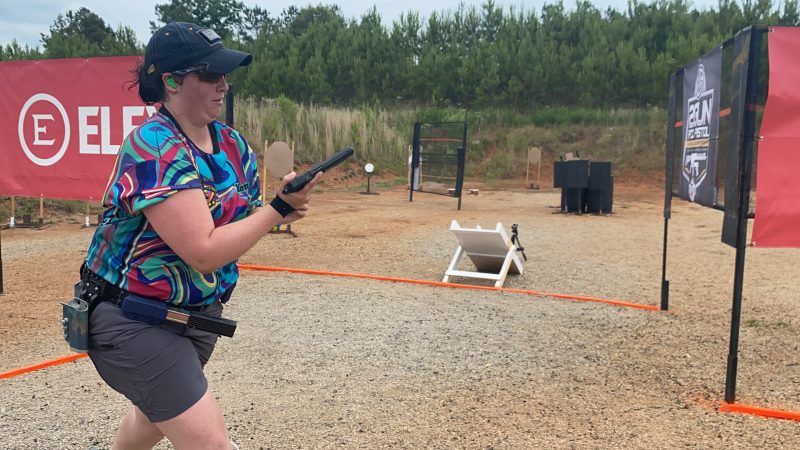 If you have a carry gun, you should always have a spare magazine and magazine pouch. Just like drawing a weapon from a holster, you need to learn how to draw a magazine out of a pouch under pressure. It is extremely easy to fumble a reload. Ask any competitive shooter how many times they have thrown a magazine, whiffed past the magwell, or didn’t seat a mag, and it dropped out of the gun before they realized it. Practice at home with an unloaded gun and unloaded magazine. Work on consistent reloads, and if you want to see if your reloads will hold up in a gunfight, sign up for a pistol competition (USPSA or IDPA) and try reloading under the pressure of the timer.

There is practicality in learning how to shoot one-handed. For many women, a self-defense scenario could include a baby in one arm leaving only one to unholster the pistol and shoot. Sometimes, incidents happen so quickly at close quarters that there is only time to unholster the gun and point shoot from the hip with your dominant hand. It is possible to be shot in the dominant hand, arm, or shoulder in a gunfight. Learning to shoot with your weak hand only can be valuable as well. 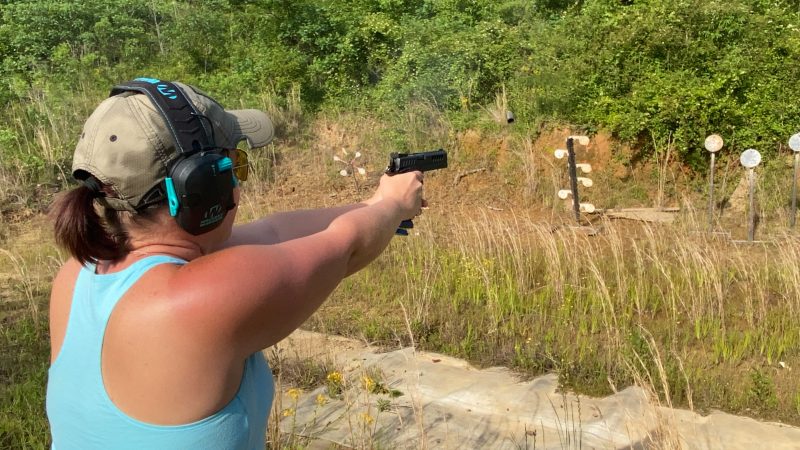 One of the firearm skills few civilians respect is the trigger press, one of the most critical fundamentals of shooting. For the most part, you will probably only ever shoot what is called a “two-stage” trigger. The first stage of a trigger press is bringing the trigger back to the break wall. The trigger at that point has all of the slack taken out of it, and the subsequent movement or pressure applied will fire the gun. The second stage of the trigger is finishing the pull that fires a shot with as little movement as possible.

Hang up a target you would shoot at the range on a wall in your house. Unload your firearm and practice finding the wall of your trigger. Work on finishing the trigger press only when your sights are aligned and on target where you want to hit. When you learn how to properly press the trigger and practice this technique with dry fire at home, you will be surprised at how much more accurate you will be when you live fire.

If you have two targets set up to shoot at, your eyes should never follow the gun or the gun’s sights as it moves from one target to the next. Your eyes move first, and your gun should follow. When you transition from target to target, your accuracy should never change. A simple way to practice this at home is to set up two targets and dry fire. Start with your eyes and gun on one target, then find the next target with your eyes, and when the gun is on target and lined up where you want it, pull the trigger (while respecting the trigger press). You can only move as fast as your eyes can transition and your brain can process.

When you fire two rounds back to back (called a split) as fast as possible, where do they end up on target? Your shots should be as close together as possible. It’s okay if they are within a couple of inches of each other, but more than that means you’ve got some work to do. Double taps show your weaknesses in recoil management and fundamentals. After you fire the first shot, you need to learn to let off the trigger, realign your sights on target, feel the two-stage trigger press again and fire as fast and accurately as possible. Double taps should not take more than half a second or be a deliberate shot. You’re working on your ability to shoot quickly and still hit your intended target twice.

Accuracy is one of the firearm skills that comes with time and mastering shooting fundamentals. Without accuracy, you are not prepared to shoot someone. In a self-defense scenario, you must be able to accurately fire a shot to neutralize the threat without injuring any innocent bystanders in the process. The only way to improve accuracy is with dry fire and live fire to put all the shooting fundamentals together for each shot. Then, do this at speed. 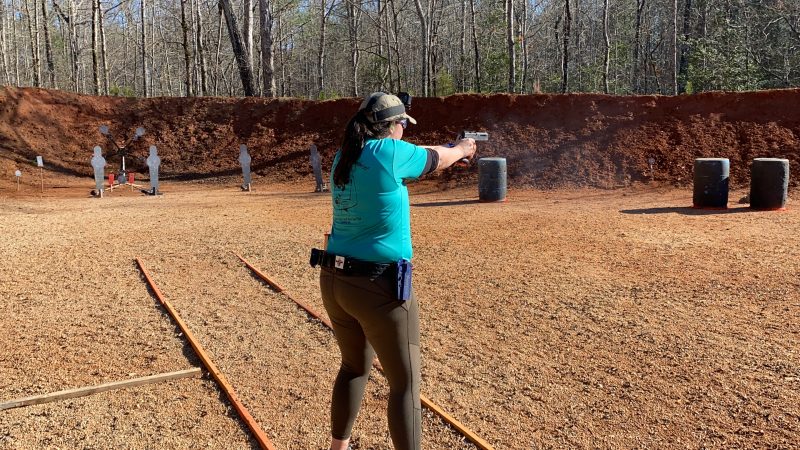 You’re most likely to have to shoot on the move in a gunfight. Or, you may need to hit a moving threat. Just because you or the target is moving doesn’t mean you cannot make an accurate shot. One of the best ways to learn how to do this is to take a movement class with a firearms instructor or shoot a competition that requires movement, such as USPSA or IDPA. Another good way to work up to this is by shooting sporting clays, trap, or skeet, so your eyes learn to follow a moving target and continue with it upon firing.

You should never hold your breath when shooting. Your body will never be at rest, and you can’t hold your breath forever, so learning how to breathe and shoot simultaneously is essential. Learning how to make accurate shots when your heart rate is both low and high is good preparation for any scenario you may find yourself in. Practice running or increasing your heart rate and double-tap a target while breathing through it. Once again, a shooting competition can help you learn how to put all your firearm skills together and to the test. Your breath control, accuracy, trigger press, draw, and more all go into competitive shooting.

Throttle control is your ability to shoot fast splits on easy or close-up targets and then slow down when you need to make a longer or more difficult shot. Think about any movie you’ve seen when the bad guy grabs an innocent person, points a gun at their head, and uses the hostage as a shield. It is possible to shoot the attacker without causing any injury to the hostage, but only if you have visual patience to make the accurate shot. You will never shoot a 5-yard target as fast as you do a 30-yard target (or if you do, you’re a World Champion shooter). Learn to respect more challenging targets with proper fundamentals and speed up on close or easy targets that you can neutralize quickly.

It’s crucial now more than ever to learn to be proficient with a firearm. Make 2022 the year you work on improving your firearm skills and maybe even teaching someone else how to improve as well.