Savage Stance: How Does It Match Up in the Concealed World? 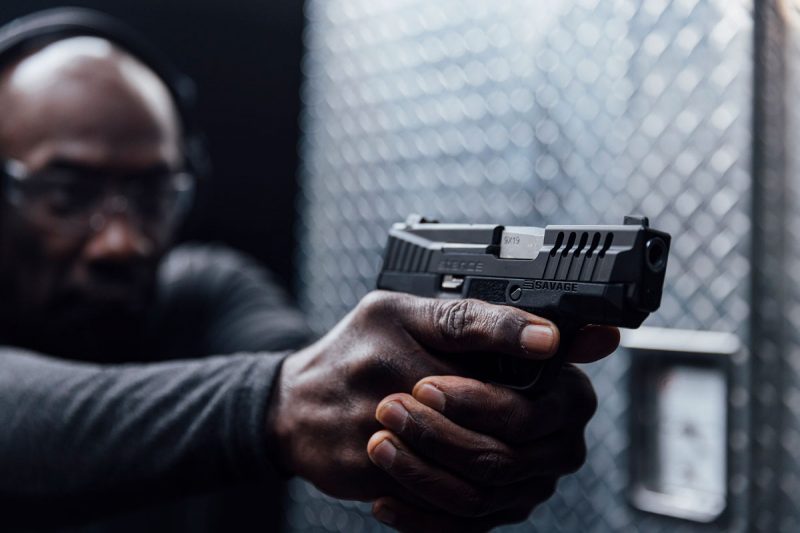 We shot the Savage Stance. And we liked it. But how does it (single) stack up to the competition?

Several years ago, the concealed carry market went from a handful of offerings by some traditional handgun makers to a packed lineup from both old-schoolers and newbies alike. The newbies weren’t necessarily new to gun making, just new to building concealed carry handguns. All the usual players – Smith & Wesson, Springfield, Taurus, Walther, et al. – dove headfirst into the CC market when states passed concealed carry laws. These original offerings naturally evolved as customer needs changed and the market grew.

The latest crossover company is Savage Arms, long known for exceptional rifles and shotguns. With a strong history of outstanding hunting and precision long guns, it makes sense that Savage would enter this ever-growing market, following the lead of other long gun companies like Mossberg with its MC2 series.

The new Savage entry is called the Stance. This is not Savage’s first official foray into the handgun business, so they are not technically new to the market. But until the Stance came out, they had not made a pistol since the early 1900s, when they produced a line of .32, .380, and .45 caliber semiautos, including one that almost beat out Colt’s 1911 for the US Army contract.

How did the Stance do in our opinion? Let’s start with the tech specs and work our way into the goods and bads of the gun.

Overall, the Stance is a good-looking gun. It’s boxy, but not too boxy, with clean lines. At just under a pound and a half, it’s the right weight for concealed carry. Overall size puts it squarely in the middle of the concealed carry market. Now that we have the base information established, how well did it shoot? After all, that’s what matters. 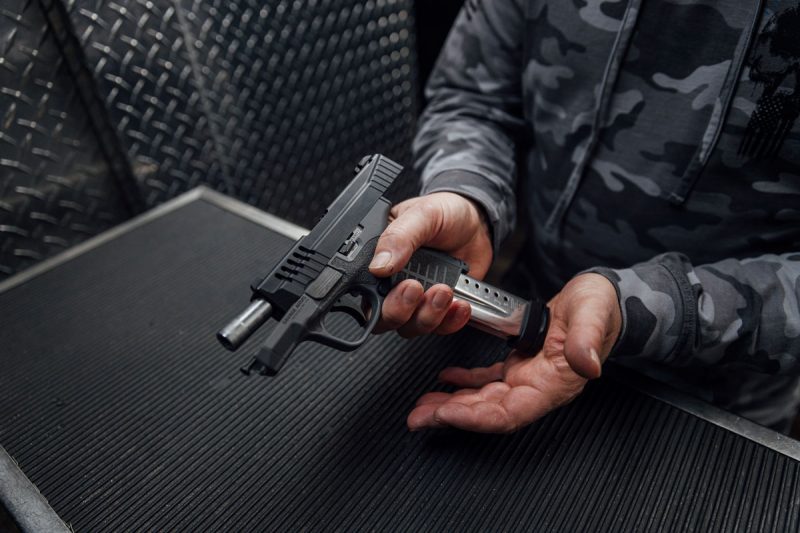 The grip texture felt good – not too much, not too little. Texturing is aggressive without being painful, ideal for sweaty palms, something you’ll probably experience in a high-stakes self-defense encounter. Hence, it’s good that Savage paid attention to this detail. 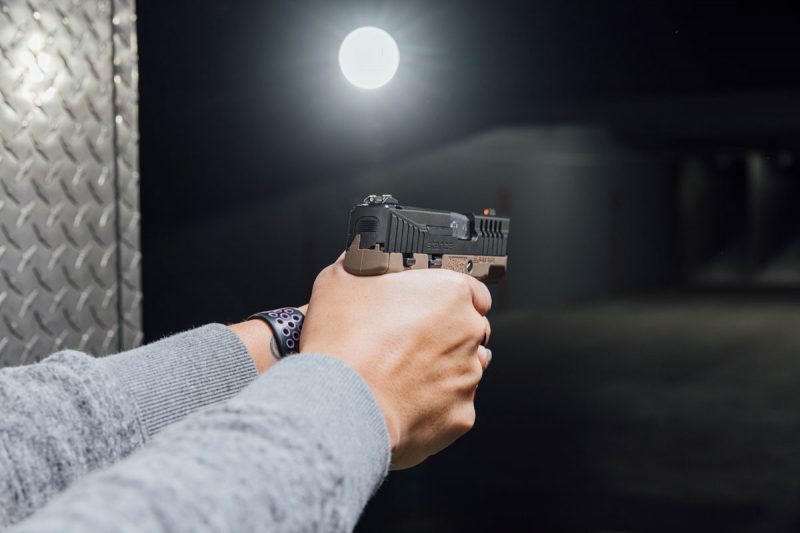 In a classic case of how initial impressions can be misleading, I was less than impressed with the trigger when I dryfired the gun right out of the box. The action felt squishy, with a longer-than-expected reset for this handgun class. However, when I took it to the range and put rounds through it, the trigger felt better, crisper, with a more reasonable and consistent reset point. In addition, follow-up shots were quicker than expected. It’s certainly not a match grade trigger, but you’re also not paying match grade price for the gun. 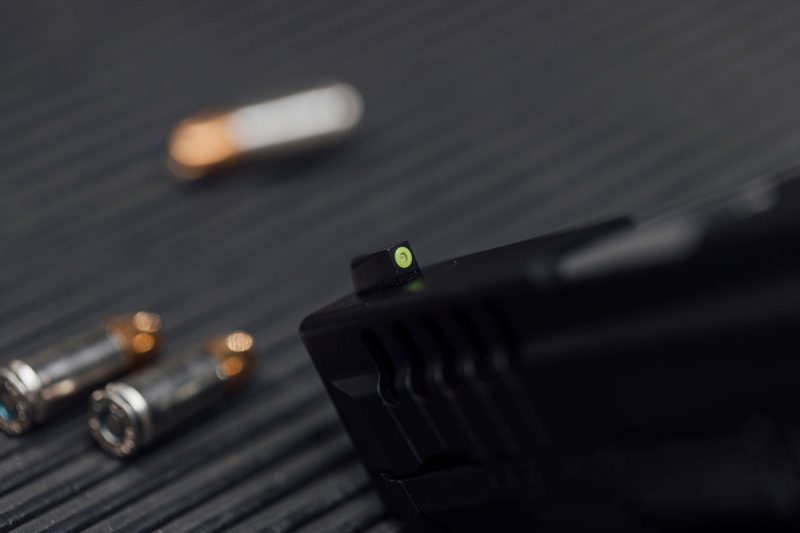 Savage also paid attention to sights, offering three target acquisition options: three-dot standard, night sights, and a conformal laser that tucks against the trigger guard. All three are non-snagging, so drawing from concealment won’t be hampered. Savage sent me the night sights version, which uses TG-H3 sights front and rear, an excellent setup that has been around the industry for a long time. As a nice tough, the rear sight is squared off to allow belt or boot slide racking.

Regardless of which hand you shoot with, it’s nice to have ambidextrous controls, especially as a backup if your dominant hand is wounded. The Stance features both ambidextrous slide stop and magazine release, eliminating the need to choose one and flip the controls before using. The mag release button is easy to reach and worked flawlessly during quick reloads.

Maintenance and cleaning on the Savage are super simple, with a typical takedown system found on many other semiautos. The takedown lever is large and in charge on the left side, with a ribbed texture and slight ramp that sticks out a bit, making for easier grip and twist. The barrel and recoil spring pop out quickly. But therein does lie a small, annoying issue: the spring is free-floating, not contained at the end of the rod, so be careful taking it apart, as it can easily fly off. It’s also a bit of a challenge to reassemble.

Unlike the original Ford Model T, you can get the Savage Stance in more than just black. In addition to the monochrome offering, you can liven things up a bit with a grey or FDE frame, both paired with the black slide. 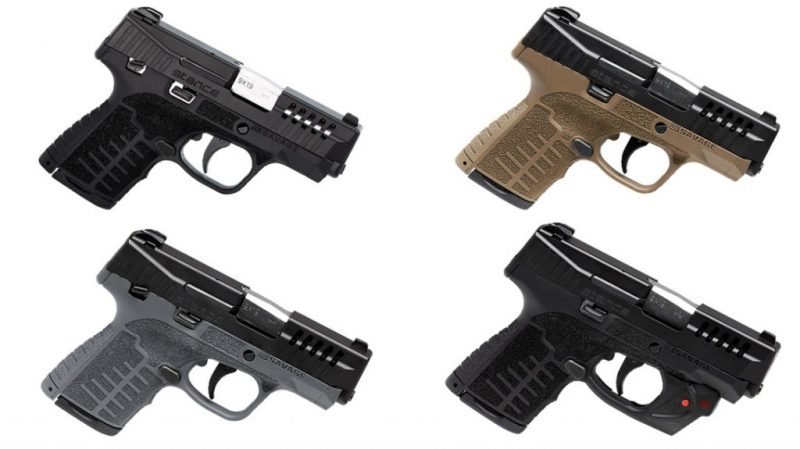 As much as I’d like only to find the great things about a gun, that wouldn’t be an honest review since no gun is perfect. Despite Savage’s well-earned reputation as a fantastic gunmaker, the Stance has a few noticeable flaws to address in future versions.

With so many subcompacts on the market today with 11 to 13 rounds standard, it’s puzzling why Savage only put 8 rounds in the larger standard magazine (and only 7 in the other). You have to special order the 10-round magazine, and because it’s single stack, the end sticks out farther, making it more difficult to conceal. This seems like a miss when compared to Stance’s competition. One thought is that maybe Savage positioned the Stance to compete with the Smith & Wesson Shield, especially since the magazines are virtually identical. (I don’t know who makes the Stance mags, but they look like they came right out of the Shield inventory.) S&W introduced the Shield+ last year with its higher capacity magazines as standard, so even the Shield has moved away from the lower capacity single-stack market. I’d like to see Savage develop their own version of the larger capacity magazines and grip combination.

While we often use two hands to snap the slide forward on a reload, it’s nice to have the one-handed release as an option. However, Stance’s slide stop lever is tiny, even for my average size hands. With his smaller hands, my son could click it home, but I could not very easily. It’s nice that the slide stop is small for concealed carry, reducing the print, but many other guns have bigger slide stop levers and don’t run into the printing issue. This is not a deal killer as to whether I would recommend the Stance, but it would be good to see a bigger one on the next version. 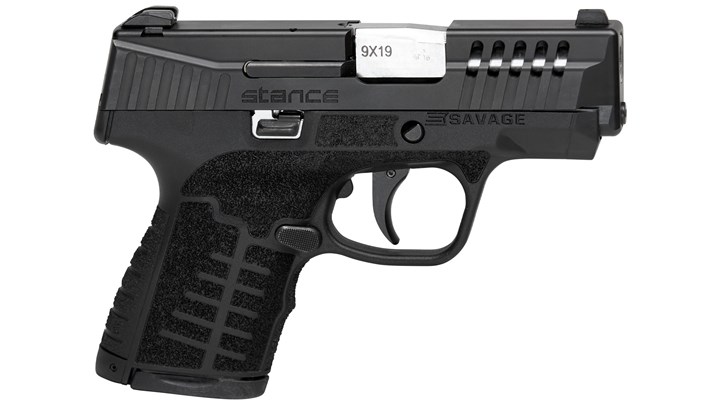 One noticeable design standout that looks cool is the slide cuts near the muzzle, exposing the barrel inside. Aesthetically, these are a plus. But I’m not sure I get why Savage wanted to reduce the slide weight on a gun that, because of its size, tends to be snappy and could benefit from as much weight as practical on the nose of the gun to reduce recoil. This seems like a mixup in priorities: form over function in an area where function matters more.

With such a focus on pistol-mounted red dots nowadays, I’m constantly surprised when a new handgun comes out without an optic plate. The Savage does not have one, which is another miss. And it might be a deal killer for some customers, especially with so many other options in the same price range that do offer the optic-ready slide.

At $479 MSRP, the Stance falls right into the middle of the subcompact concealed carry market, which is likely a wise choice, as it has a lot to offer but is not as tricked out as many of its competitors. Savage’s biggest competition is not today’s popular higher capacity subcompacts, such as the P365, Hellcat, GX4, or Shield+, but rather the older versions of the Shield and other similarly priced single-stack offerings, including small 1911 models. 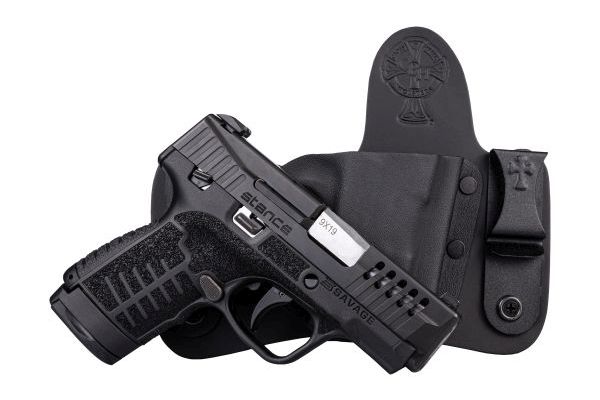 At first, I wasn’t sure I would like the Savage Stance. My immediate impression was it was trying to be a Shield clone, and I couldn’t figure out why. But the more I shot it and the deeper I dug into its design, the more impressed I was with the gun’s performance. While I don’t see this gun landing on my top ten list, it is certainly a solid option for the money.