Appendix vs. Strongside: Which is Better? 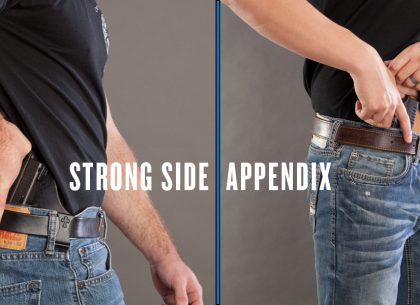 What’s the best way to carry concealed: appendix or strongside hip? Before I get started, let’s take one option out of the equation: off-belt carry. While there are plenty of other carry options besides appendix or strongside hip, such as ankle, off-body, pocket, jacket, etc., let’s focus on the two most common carry methods and their pluses and minuses. This is, after all, an article, not a book.

Why are these the most popular carry positions? A key factor in winning a gunfight is quick access to your weapon. While that may seem like a no-brainer, I’m constantly amazed at how little concealed carriers think about the real world and how they plan to get to their gun in an actual encounter. Real gunfights last mere seconds, not the long, drawn-out shootouts made famous in Hollywood epics. You have to get to your gun right now.

Pros: There’s something to be said for having a gun right in front of you at all times. Whether you’re wearing a jacket or just a shirt, an appendix-carried gun is accessible with very little movement. For the unfamiliar, appendix carry means the gun is safely tucked away inside an IWB holster in the front of your pants, right in front of your…wait for it…appendix (clever name, no?). This position eliminates the need to reach around your waist, clear your shirt or jacket, and hope you grab the gun the right way for the draw. Faster out of the holster means faster on target.

It’s also pretty hard for a bad guy to sneak up from behind and steal an appendix-carried firearm. For a face-to-face encounter such as a robbery at a gas pump or to prevent a carjacking, appendix offers a much faster draw, especially from a seated position.

Appendix is also popular with fashion-conscious women who have a hard time finding clothes that allow strongside carry. It’s easy to hide an appendix rig under a blouse or sweater, and because women are (thankfully!) shaped different from men, they have less issue with the leg gouging drawbacks of a gun in front.

Cons: The biggest complaint about appendix carry is it often hurts when you sit down – a lot – because the gun and holster dig into your groin. Standing is typically fine, as your body is in a straight line top to bottom, but bend at the waist and you’ll gouge the top of your leg. Speaking of muzzles, who wants a loaded gun pointing at their junk or the blood-filled arteries that surround it? Can you say, “lethal accidental discharge”?

Also, overweight individuals have a harder time carrying appendix because of printing issues. It’s also difficult to conceal a full-frame firearm because the grip tends to stick out too far. Thanks to more appendix-carry-friendly waistlines, however, women often find this position far more comfortable than men. And with no, ahem, stuff in the way, sitting is less of an issue of women. 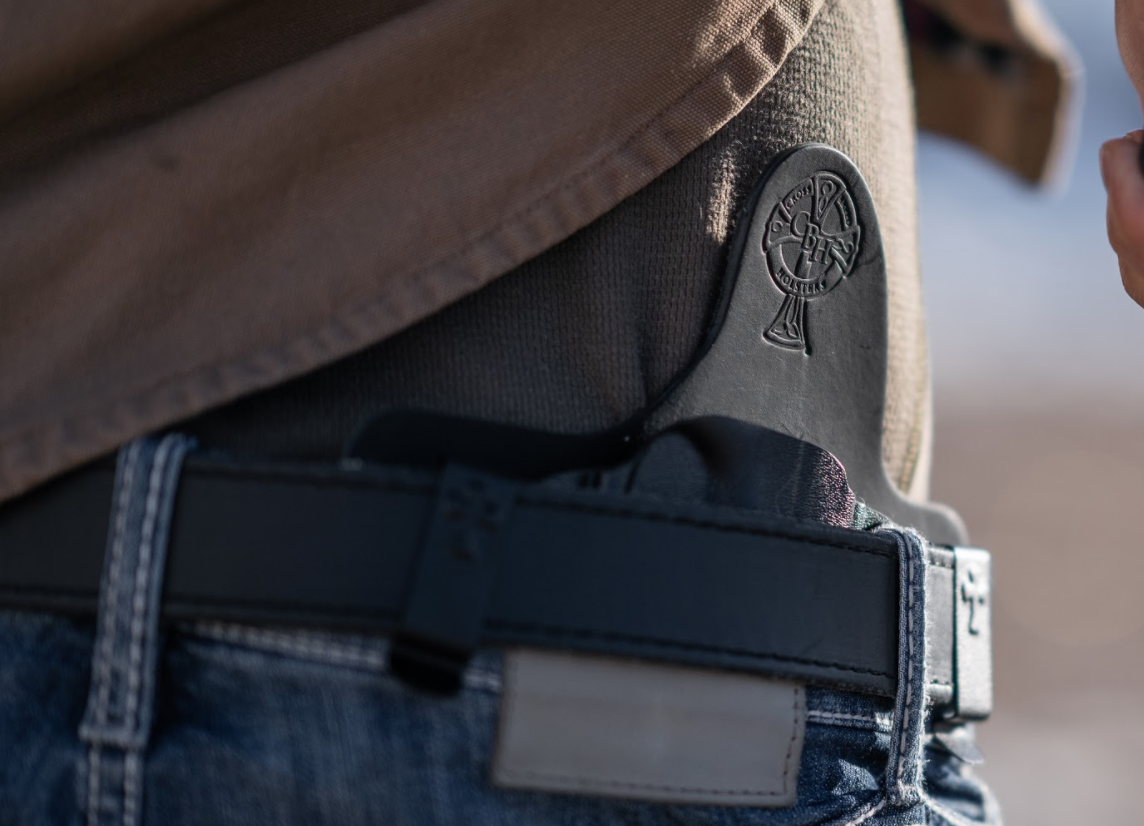 Pros: If you’re into comfort, strongside hip is the way to go. No digging into your leg and no risk of the unquestioningly inconvenient accidental discharge to the groin when you reholster. So, in a way, the case could be made that strongside carry might help your sex life. If that’s not enough reason…. ever need to bend down to pick up something? It’s much easier with the gun behind you or at your side than stabbing you in the leg and waist. The draw stroke from the hip – even the 4 o’clock position – is a more natural arm movement than twisting from the front; the elbow and arm are already at the right angle when the gun comes out of the holster. If you’re approached by a robber, you can blade your body for the draw if you need to fake removing your wallet from your back pocket.

Unlike appendix carry gun snatching (see above), it’s hard to steal a strongside hip carry with a frontal attack. So the guy how slugs you in the gut probably won’t feel your gun – then again, if he were to bust his knuckles against it…. But you get the point: for a threat from the front, a gun tucked behind is more secure.

Cons: First, you have to reach around your side to draw, which is not as convenient as drawing from the appendix in front. Second, there’s the issue of clearing your cover garment adequately not only for the draw but also for reholstering at the end of an encounter. All that material could get stuck inside the holster and foul the action of a semi-auto on its way back in. Third, drawing while seated – especially in a car – presents its own set of difficulties, including the need to rock your body out of the way and possibly clear the seatbelt buckle to reach the gun. If you forget to bend from the waist when you reach down or squat, the gun might reveal itself behind you, thus removing the whole “concealed” part of concealed carry.

Reholstering behind your body takes a bit of practice. Do it wrong and it might not be as disastrous as an appendix reholster miscue, but you still won’t like the more-than-uncomfortable sensation of a high-speed projectile tearing through the inside of the back of your leg. This, of course, can be remedied with plenty of empty gun training and the right holster, but it does take practice.

However you prefer to carry your firearm, just make sure you practice with it. Get used to where your gun is on your body. Stand, sit, kneel, run, bend over, draw from different positions. And, of course, get a good CrossBreed Holster and gun belt for your EDC and your style of carry!

David Workman is the Content Marketing Manager for a major tactical apparel and gear manufacturer, an avid gun guy, and a contributing writer to several major gun publications. In addition to being an NRA-certified RSO, David trains new shooters on basic handgun skills and CCW requirements and is a strong advocate for training as much as you possibly can. “Real life shootouts don’t happen at a box range.”