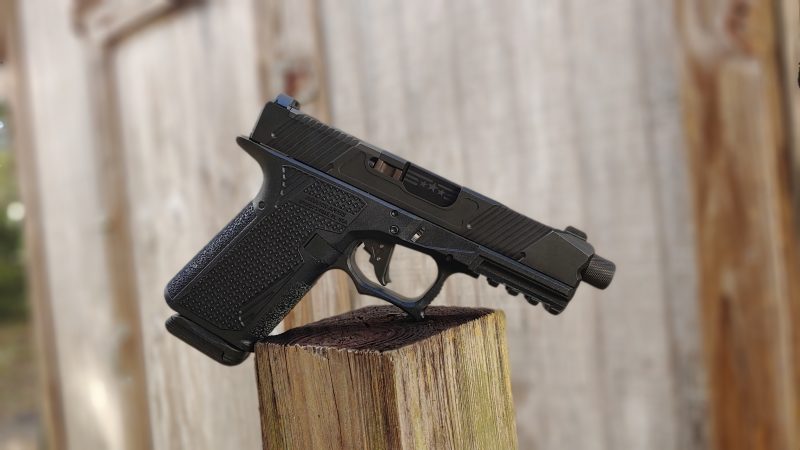 Gunmakers stepped up their offerings in 2021. Here are Travis' top 5 new handgun picks of the year.

Adams Arms makes AR 15s, so you might be wondering why you are seeing them on a holster makers blog. I get it, but Adams Arms is branching out. These days they are making more than just AR 15s. In fact, they are producing their first dedicated handgun known as the AA19. The AA19 takes its cues from the Glock 19 but takes it to an entirely new level. The AA19 is a compact, 9mm handgun outfitted with every doodad and widget you could ever want.

Breaking Down the AA19

The AA19 provides shooters with a professionally customized platform that's ready for all the modern accessories you could ever want. Is it optics ready? Yep, and it can be fitted with a variety of optics using a plate system according to the Adams Arms. It's not your standard Glock 19 upper parts kit. Can I toss a light on it? Yep, in fact, it features a nice Picatinny rail for attaching whatever you want. 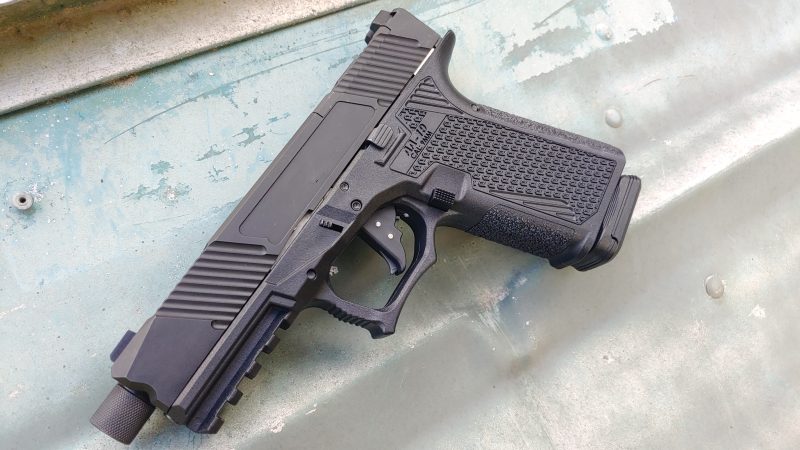 What about a muzzle device? Maybe I want to add a suppressor or a compensator. Well, you are covered with Adams Arms' match-grade threaded barrel. You can attach basically anything you want to this gun outside of a chainsaw. The AA19 predictably utilizes Glock magazines and comes with two Magpul GL9 magazines. 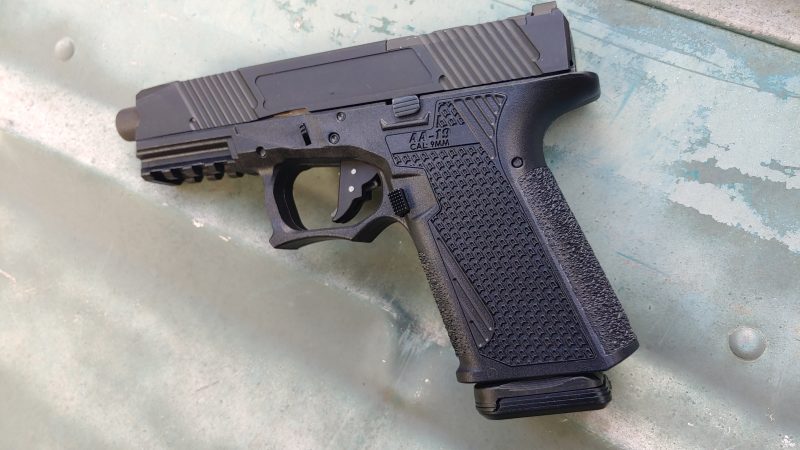 The slide is a custom cut design with a series of angular cuts that makes racking the weapon easy, as well as doing press checks, clearing malfunctions, and similar tasks. These serrations are deep, and they cling to your grip, so if it's wet, sweaty, or gloved, they won't be an issue. The sights are from Ameriglo and are the Deforr EDC sights that are all black and made from steel.

The Ergonomics of the AA19

The grip angle is very SIG or 1911 like and a little more straight than the swept-back Glock style. The grip texture is aggressive and grips back when you grip the gun. Adams Arms installed a high beavertail on the gun and a set of double undercuts under the trigger guard. The undercuts allow you to get a really nice and high grip on the gun without the rear of slide bite. 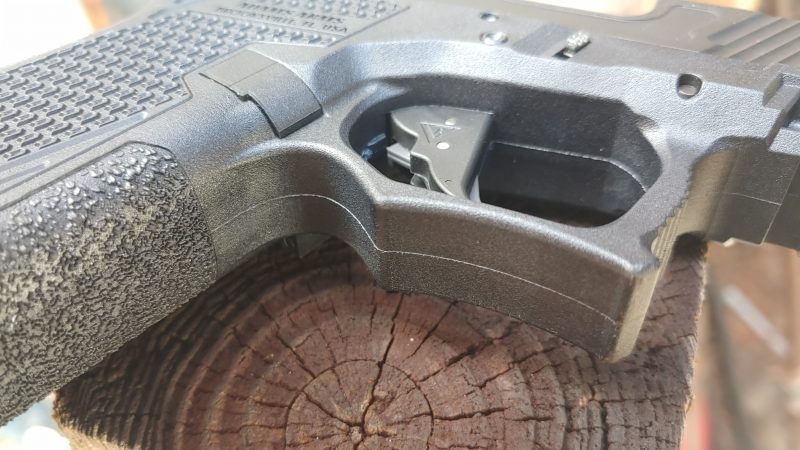 The closer you get your hand in line with the bore, the better. This makes it much easier to control the weapon and manage muzzle rise and flip. We get an extended magazine release with the AA19, and it is very easy to reach and press without having a major shift in your grip. Making those mag swaps feels intuitive and simple.

It's finally to pew!. As such, I brought out a good variety of ammunition and Glock magazines. At first pew, I realized those all-black sights were something else. Not bad, but different than what I was used to. It took some time to learn to see and track them between shots. However, they were nice and thin.

They don't obfuscate the target at longer ranges, and the air between the rear sights makes them easy to get a sight alignment and get on target. The nice high grip you can assume on the gun makes controlling the AA19 simple. When firing quick double taps, controlled pairs, and the like, you feel the difference a good high grip makes. 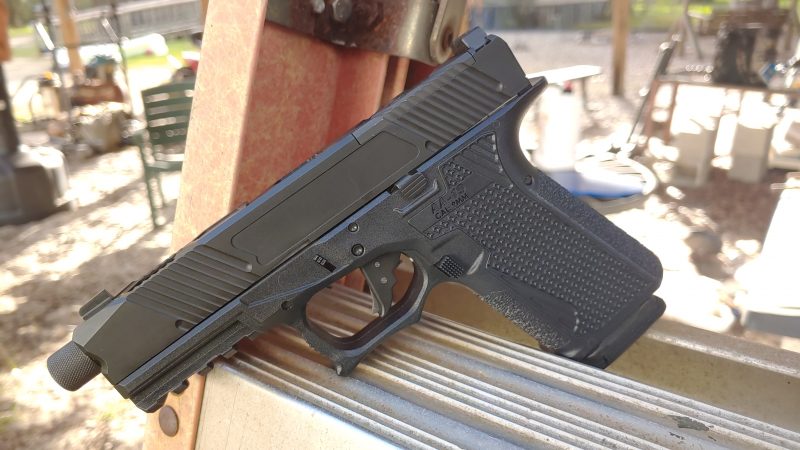 The AA19 trigger comes from Tango Down and is a Vickers Carry trigger. It's a fantastic carry trigger that's not super light but very smooth with an ultra-short reset. That helps you fire straight and fire fast. Who doesn't want to do both? In fact, I was surprised at the accuracy I got out of the gun. Hitting little gongs at 25 yards doesn't provide much difficulty, and keeping them swinging isn't a problem.

Reloads are quick and stress-free with the big magazine release. The empty mags hit the floor and provide an accepting magwell for fresh magazines. Of all those fresh magazines, I couldn't get the gun to choke. It ate all the brass and steel-cased ammo I poured into it. 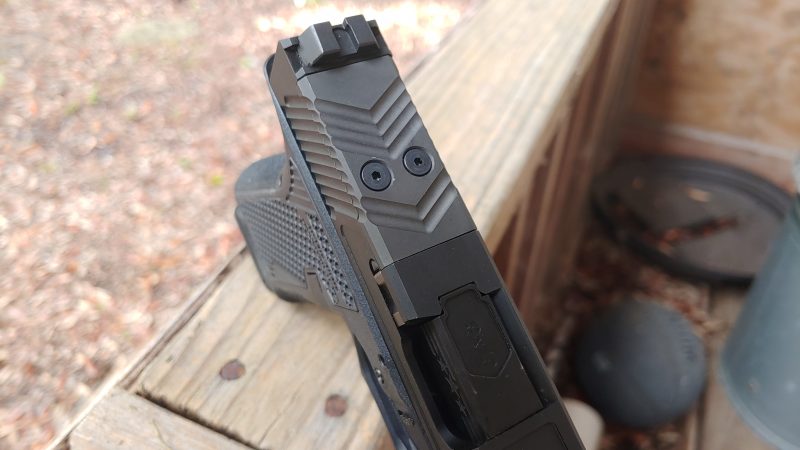 The AA19 ended up being a very competent combat pistol. It shoots straight, handles well, and it shows Adams Arms took a fair bit of time polishing the gun before releasing it. I'd imagine a lot rides on your first gun when you jump into a new genre of firearms. Yet, the AA19 seems to be one of the better striker-fired polymer frame pistols on the market. It's as concealable as the Glock 19 it's based on.