Gun Review: Putting The Walther PPS Through the Paces

For years now, my go-to concealed carry gun has been the Walther PPS. The PPS is an old gun by most accounts, especially when it comes to single stack 9mms. It was basically the OG single stack 9mm. It came to be well before the Glock 43, the XDs series and the S&W Shield. The Walther PPS found its way into my heart and my inventory for a wide variety of reasons I'd like to share with you.

The Walther PPS is a striker fired with a single action only trigger. The same kind you’ll find in any modern polymer frame pistol. The PPS in Walther PPS stands for Police Pistol Slim. An odd name for a gun suited more for concealed carry than police use. The gun itself looks very refined, everything is smooth and its easy for carrying and drawing.

The Concealment and Firepower Compromise

The smaller you go with guns, the less firepower you typically have. The rise of the pocket pistol brought us smaller and smaller calibers including the renewed interest in the 380 ACP. The problem being these smaller calibers often offer weaker penetration, substandard expansion and the size of the guns significantly limit capacity. 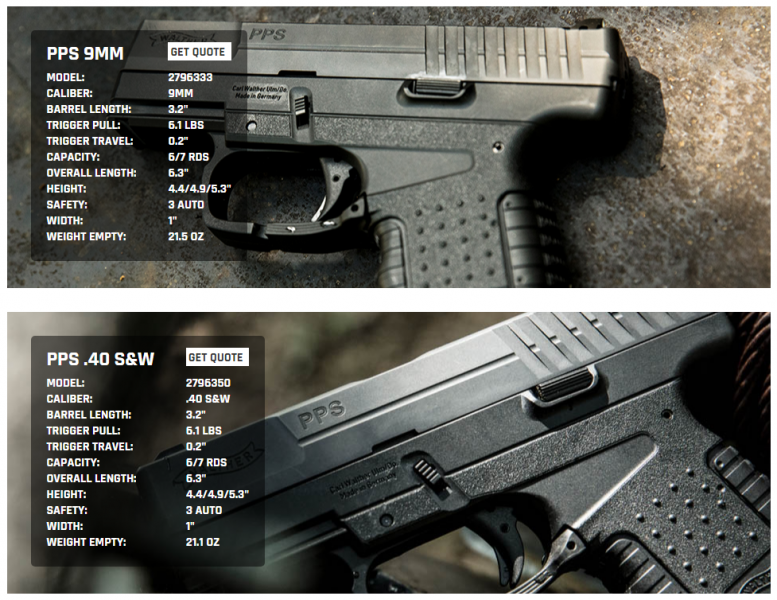 Guns like the Walther PPS, however, are an excellent compromise in both concealment and firepower. The Walther PPS comes in both 40 S&W and 9mm, but my chosen caliber is 9mm. The Walther PPS can pack 6 to 8 rounds of 9mm in various sized magazines and each magazine changes the size of the gun’s grip. Walther lists only 6 or 7 shots on their website, but 8 round magazines are available.

I know because I own one.

The Walther PPS is only an inch thick and weighs 21.5 ounces. The PPS is 6.3 inches long and packs a nice 3.2-inch barrel. There are smaller guns, but the Walther PPS does an excellent job of combining concealment and firepower.

The magazine sizes are part of Walther’s intrinsic modularity. Modularity in small guns is rare, and I like that Walther addressed it before most companies even made single stack 9mms. 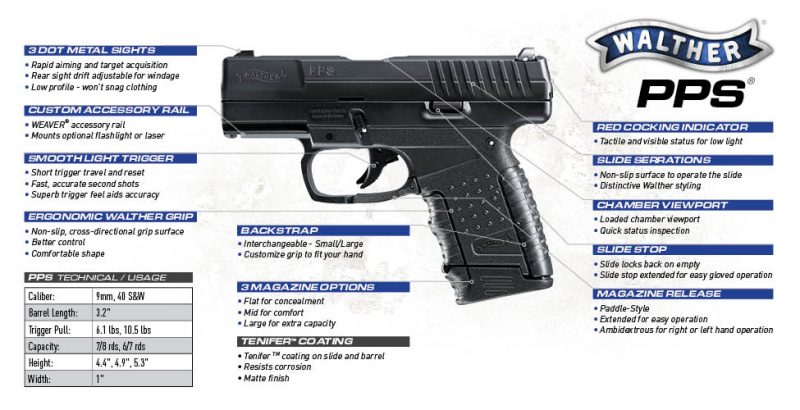 The 6 round magazine is a flush fitting design that maximizes the gun's concealment, and the 7 to 8 round magazines extend the grip to make it more comfortable for shooting. I like the extended eight rounder for the added capacity and the extended grip. I’m a big guy with big hands, so I want a gun whose grip fills my hand.

Outside of that, the Walther PPS does include grip inserts that allow you to change the rear of the gun’s grip to fit your hand better. With the grips removed the weapon is rendered unfirable. This acts as a safety device, albeit one I've never used.

In the Field With the Walther PPS

Carrying the Walther PPS is an absolute dream. It’s so thin and lightweight you’ll never have a reason to leave it home. It’s perfect for IWB carry and hardly adds any bulk to your body. The Walther PPS does offer an excellent full grip with the right magazine which makes drawing the gun much more natural.

The single stack magazines are also thin and light, perfect for concealed carry on the belt or even in the pocket. The gun comes with two, and I carry an extra seven rounder with my gun. All you need is a minimalist holster to accommodate the lightweight and thin nature of the weapon. Due to how thin it is it’s effortless to carry IWB and appendix or to have a bulk-free OWB carry.

Other than feeling odd I’ve never felt that my grip is compromised with the PPS. It just is what it is. The longer base plates do allow me to get an overall better grip on the gun. This gives me a secure grip that helps me deal with recoil and to fire rapidly when need be. The solid and well-made sights are quick and easy to use. Most small guns have minimal sights, but the PPS gives you excellent full-sized combat sights.

Getting on target is very easy and the gun points naturally. It’s free from slide bite, even with a very high up grip. With the fundamentals down you can swiftly and decisively engage man sized targets out to impressive distances. It’s an easy handling gun, and it's enjoyable to shoot and practice with.

Some will hate the paddle magazine releases, but I personally really like it. It's easy, ambidextrous and intuitive. It takes some practice, but once you master it's hard to go back. This paddle is the reason I haven't purchased an M2 model of the PPS.

The Walther PPS is a fantastic gun, it's reliable, easy to carry, and well suited for both combat shooting and concealed carry. Walther knocked it out of the park with this gun.