As we all know, getting new shooters (and, sometimes, even seasoned gun owners) to the range is important. Especially if we want to continue to advance in our skills and promote a positive image of the firearms community.

Initiatives like the NSSF's #LetsGoShooting program and even Ladies Night at gun ranges across the country are achieving this with class.

Frankly, it's not hard, it just takes a bit of effort and basic social skills.

So when a female gun owner posted an open invitation on Facebook welcoming people to join her at the range in Austin, TX., one of the responses was not only shocking, it was downright insulting.

I made a post looking for shooting buddies on my friends list and this absolute riot occurred when this man apparently thought I wasn’t intelligent enough to not get killed or even pick up a weapon. 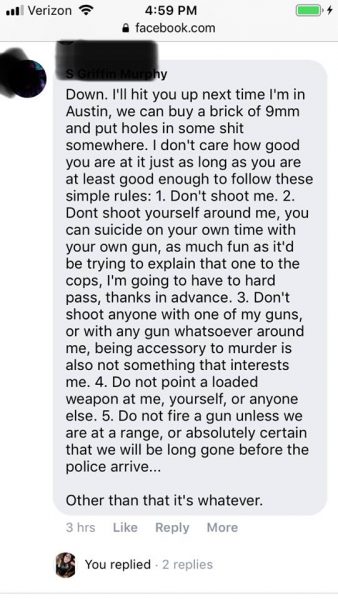 Now, I have a great sense of humor and am as snarky as they come but nothing about his response seemed appropriate to me. Especially since it was made on social media.

Since gun owners are already forced to defend themselves against the public's ignorant view of who we are and how we conduct ourselves, how we present ourselves in situations like this is paramount. As we teach in hunters safety and concealed carry courses, showing respect for others only serves to improve our image and keeps a door open to change minds.

With the news, media and the "entertainment" industry telling everyone how evil gun owners are, we certainly don't need to help them in that department. It's important to show others that we are responsibly armed in order to dispel the notion that we're a bunch of shoot-em-up idiots.

The woman then shared the screenshot of his comment in our ladies' group where 98% of the respondents agreed - this type of response to her invitation is wildly inappropriate.

There were a hundred ways he could have responded and we may never know why he chose to do so in such a manner but what do you think? Is this a response you'd make to a female gun owner. Is it something you'd be okay with if it had been said to your significant other, sister or daughter?

Or would you use an opportunity like this to offer a respectful reminder of the four rules of gun safety?

Sound off in the comments!!

She is the daughter of a great hunter, a wife, a mother, a Visiting Fellow with the Independent Women’s Forum, a former editor for Bearing Arms, and a “good gal with a gun.” She frequently appears on NRA TV, has been covered by Townhall.com, the Washington Post, and Women’s Outdoor News. She is a graduate of the Gunsite Academy and has hundreds of hours of firearms training under her belt.

Jacques is an active and ardent supporter of the Second Amendment, an outspoken concealed carry advocate, and an avid outdoorswoman.
She can be found on Twitter, Facebook, and Instagram.