The Ultimate Guide to the Iconic 1911 Pistol: Part 1 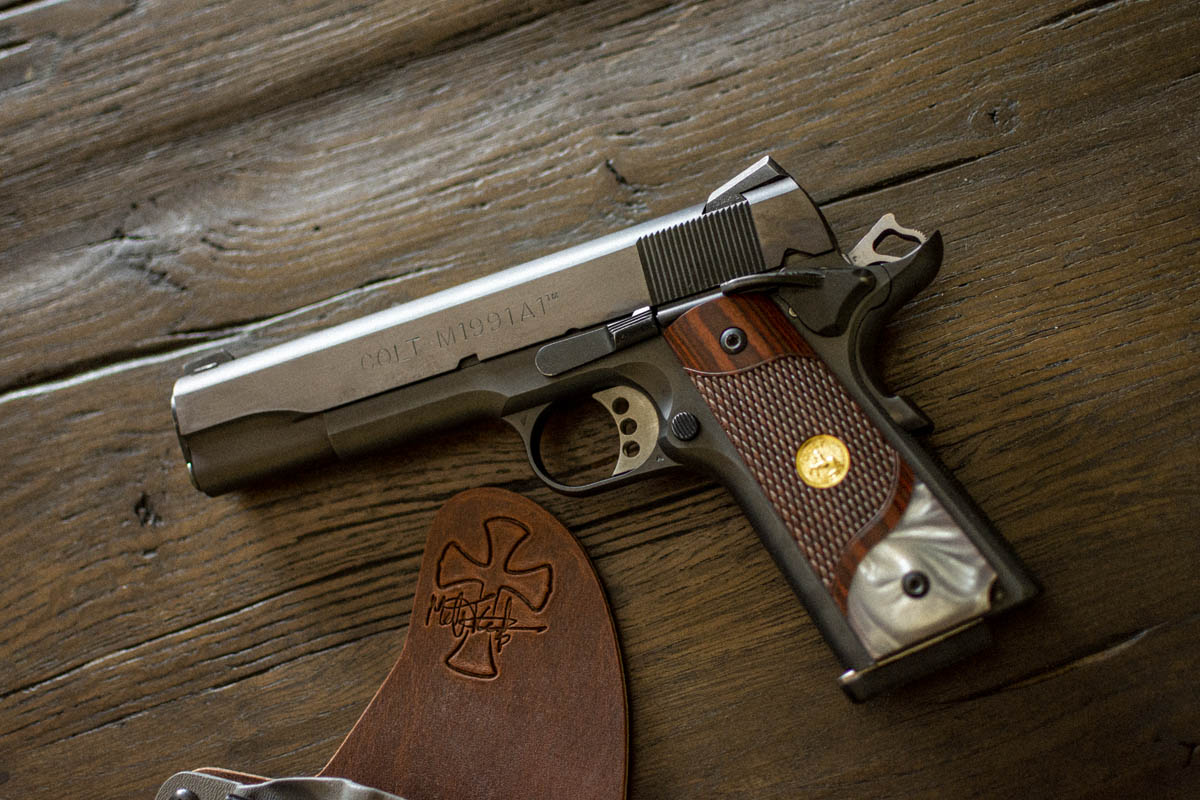 The M1911 pistol is arguably the most iconic handgun in American history. Beginning as a military handgun once mass-produced and readily available to the general public, it quickly evolved into one of the most popular firearms for shooting enthusiasts and firearms aficionados alike. Perhaps the biggest contributor to the fact that the 1911 the most mass-produced gun is that it's the most versatile in caliber, size, and function.

There's a 1911 for any role and task, which can get confusing.

The M1911 is a single action, semi-automatic, magazine-fed, recoil-operated handgun that utilizes the Browning tilting barrel design and short recoil operation. The tilting barrel design is one of the most popular handgun designs for semi-automatic pistols. It allows the breach of the barrel to remain closed during the moments when the pressure from the expanding gasses is at its peak. As the pressure drops, the breach can open, eject a cartridge and feed the next round. 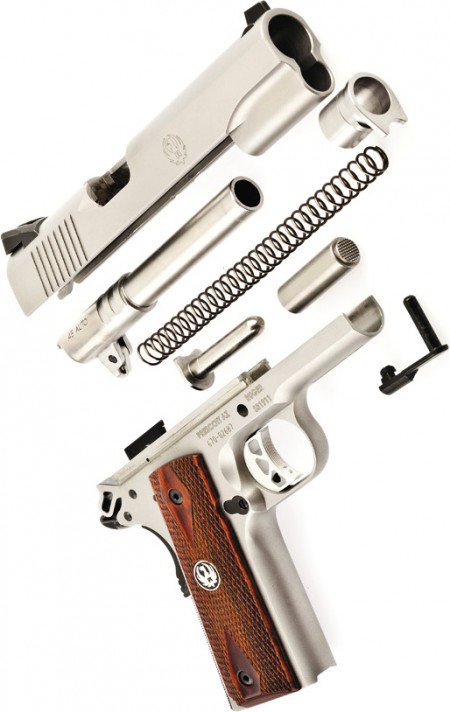 The svelte, thin lines we love on the 1911 are due to this design. Alternative designs exist, but the tilting barrel doesn’t require a stiff recoil spring and relatively small powerful cartridge like the Walther PP series or a massive and heavy slide on Hi-Point firearms. It’s a balanced system that gives you a light slide, the ability to use powerful cartridges, and is a reliable design.

A Historical Hall of Famer

The M1911 was designed by the closest thing the firearms community has to a Saint, John Moses Browning. The pistol was designed for a military contract to replace their current crop of revolvers. Like many military firearms, the 1911 was born of a wartime need. The military was armed with the 38 Long Colt, and the round proved to be anemic in the Philippine American war. Sometimes you just need a cartridge that can stop a drugged up Moro warrior.

The Army pulled out some of the older single-action revolvers in 45 Colt. This round proved to be more effective at dissuading enemies of the United States. The military then conducted several tests and determined the next handgun service round needed to be in 45 without exception.

Browning worked for Colt and developed the handgun and submitted it via a competition between a 45 ACP Luger and an entry from Savage. The Browning design smoked the competition and became the American service pistol, a title which it kept for the next 74 years. 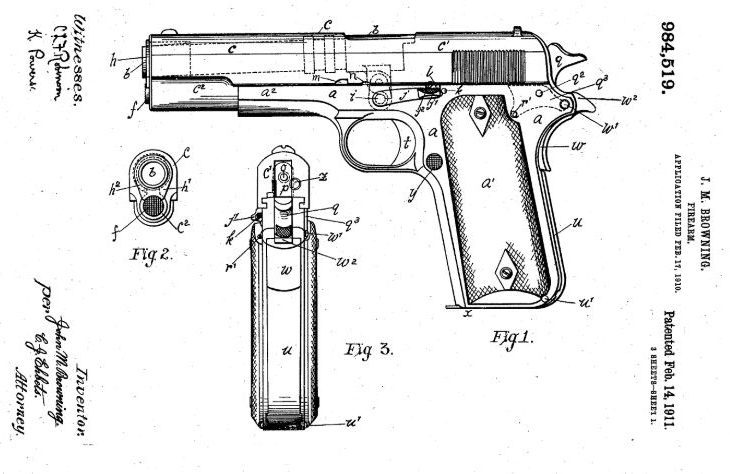 Colt held the contract, but as wars got bigger, these guns were often produced by other companies to supplement the need for handguns. This includes predictable companies like Remington and Ithaca, and some odder companies like Singer, the sewing machine company.

In 1924 the military wanted to modify the M1911 to make it more ergonomic, especially for shooters with smaller hands. In a post-Great War environment, we saw the slow implementation of the now declared M1911A1. The M1911A1 implemented the following changes to the famed pistol.

The M1911 and M1911A1 continued to serve side-by-side, and replacement of the older standard models was incremental. As wars and battles came and went, so did these guns. The military’s modification of the M1911 pistol did not stop, though.

The Colt Ace was designed in the 1930s by David Marshall Williams, the famed creator of the M1 Carbine. The Ace was a 22 LR training variant and conversion kit for the M1911. What is unique about the gun is the way the chamber was designed.

The Colt Ace used a hinged floating rear chamber that amplified the recoil of the weapon to simulate the recoil of a 45 ACP better. This design also allowed the heavy slides to function. Adoption seemed to be limited to the United States Navy, and the Colt Ace was released onto the civilian market as well.

In the 1970s, a weapon known as the M15 pistol was produced. This weapon was designed and issued to General officers as their personal defense weapon. The M15 started life as a 1911 and was equipped with a shorter barrel and slide. These guns wore a 4.25-inch barrel and were more refined than a standard 1911. This includes a beautiful deep blue finish, wooden grips, and markings identifying it as a General Officer’s model.

Only 1,004 of these guns were ever produced. Generals had the option to return the pistol or purchase it at the end of their service.

The Marine Corps and the M1911

My beloved Marine Corps produced its MEU (SOC) M1911 for Force Recon Commandos. Born as M1911A1 pistols, they were gutted, stripped, and made anew by Marine Armorers in the Precision Weapons Section. These pistols were built and rebuilt with some frames having round counts into the half-million mark. 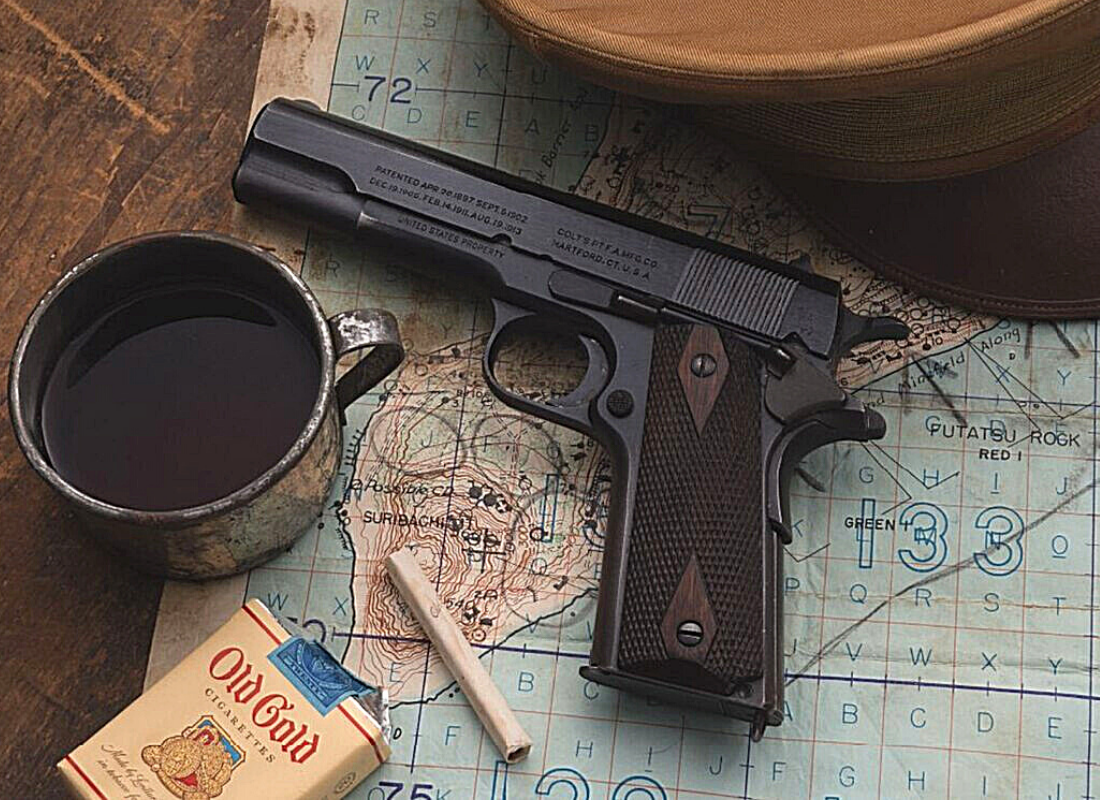 The Colt 1911 pistol carried during the 1945 Battle of Iwo Jima by Marine combat photographer Sgt. Arthur Kiely along with an original annotated map of the Iwo Jima assault plans is being auctioned off by Rock Island Auction Company.

As Marine Special Operations grew and frames became out of spec in size, they had a shortage of pistols for operators, so they turned to commercial off the shelf options from both Kimber and Springfield.

The Marine Corps eventually settled on the Colt Rail gun, and it was adopted as the M45A1. Over 12,000 were purchased and issued out to Marine Special Operations.

The military changed and altered the 1911 in numerous different ways. At around the same time, the civilian market was expanding, and the popularity of the weapon has always been high. Colt has also been the defacto, go to 1911 manufacturer. In the 70s and 80s, they were also the top tier M1911 manufacturer.

In the 1970s the Series 70 was born. Series 70 1911s featured a collet bushing with 4 ‘fingers’ that would keep the barrel perfectly centered. This made for a very accurate gun, but the ‘fingers’ tended to be fragile and would break under pressure. 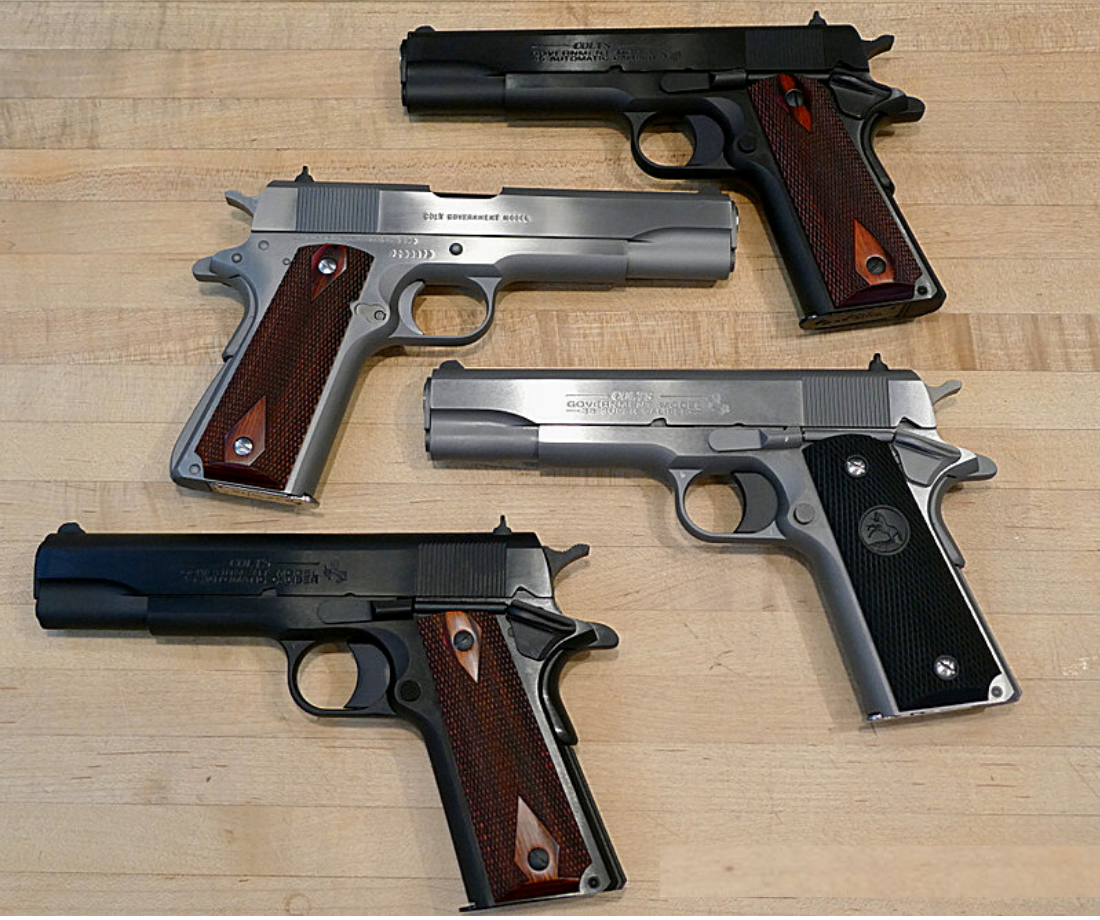 In the 1980's we saw the Series 80 make its debut. The Series 80 guns eliminated the collet bushing and went back to a standard barrel bushing. Colt also incorporated a trigger-actuated firing pin block that added an extra layer of safety between the hammer and the firing pin. The trigger must be pulled to unblock the firing pin. Colt also flattened the mainspring housing of the grip.

Lastly, Colt installed a half-cock shelf that replaced the half-cock hook in previous M1911 models. This half cock shelf is more durable and less likely to fail should the hammer slip while the user is manipulating it.

The Colt 1991 is a Series 80 gun with a few new external features. The Colt 1991 has an extended tang on the grip safety, a more prominent ejection port that has been lowered to increase reliability, and taller three-dot sights. 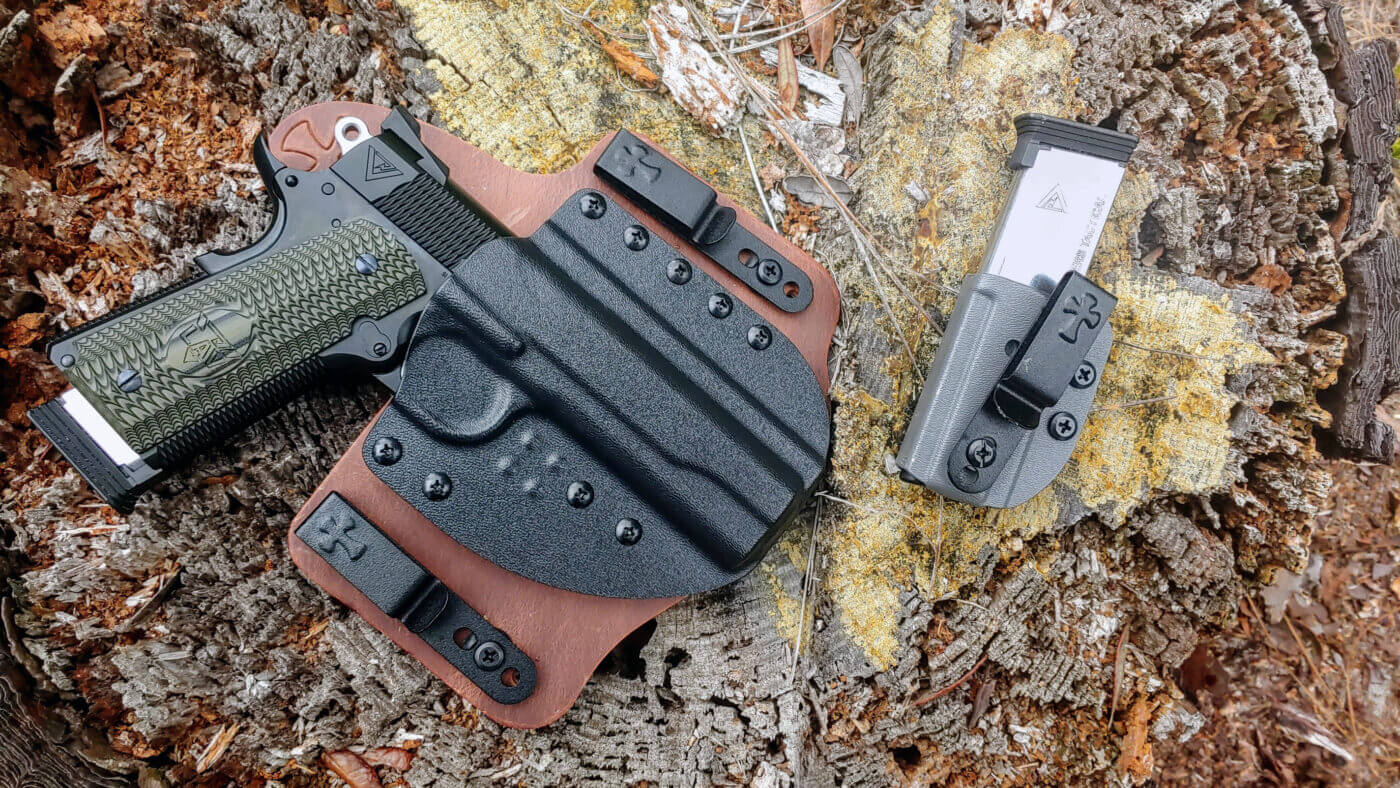 The Vickers Tactical Master Class 1911 from Springfield Armory, via The Armory Life

The M1911 is also a proven platform, with excellent ergonomics and a trigger to die for. Let’s not forget than the AWB of 1994 gave us a ten-year gap where capacity was restricted to ten rounds, so guns like the 1911 were hard to outclass when capacity was so limited.

There's more to the 1911 pistol than what we've covered here, so we'll pick this up in Part 2.