It's a pocket rocket battle and today, we're taking a look at two guns that may be extremely different in design, but are also similar in a lot of ways: the Sig P365 vs Ruger's LCR.

Obviously, one gun is a revolver and the other is a pistol, so what exactly could they have in common? Well, before we start the showdown, let’s talk what they have in common. For one, there is the basic size comparisons. Both guns are small and designed for concealed carry. Both are high-quality guns of course, and both are wildly popular with consumers. Most importantly as designs, they are both a modern take on old models.

Now, let's look at their differences to determine a winner in this match up!

The Ruger LCR 9mm incorporated a healthy dose of polymer into the revolver design, something very unique in the revolver world, while the P365 is a small semi-automatic that holds way more rounds than it should. This gun has the dimensions of weapons that often hold 6 or maybe seven rounds. Instead, it holds 10 to 12 while remaining pocket size.

Both guns are exciting designs and at the top of their respective categories. Now that we have all that out of the way, let's move on to how they work as carry guns. 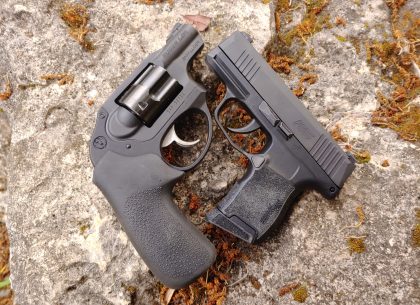 As carry guns, the most important thing we can address is a P365 vs LCR showdown is how easy they are to carry as an EDC. Both guns are small and sport similar specs, we’ll outline their specs, and I’ll address my personal experience carrying both guns.

The Ruger LCR is slightly lighter both loaded and unloaded than the P365, but just barely at .6 ounces lighter. The barrel is also much shorter at only 1.87 inches, and the P365 packs a 3.1-inch barrel. Overall the LCR is nearly a full inch longer than the P365. 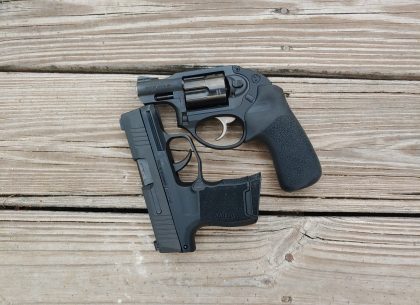 Height wise the guns are close with the LCR being .2 inches taller. Overall the p365 is smaller, thinner, and only slightly heavier.

In my experience, the flat nature of the P365 makes it very easy to conceal, it's also quite light and small. However, with the right holster, the Ruger LCR disappears on my body. Both guns are easy to carry, and neither pokes, prods, or pulls at my pants.

As concealed carry guns, I’d call it a bit of a tie.

SIG hands down wins this contest. They include an excellent set of SIG X-RAY night sights that feature a large, bright green ring around the front sight for quick acquisition while the Ruger LCR uses a standard rear trench and black front sight. 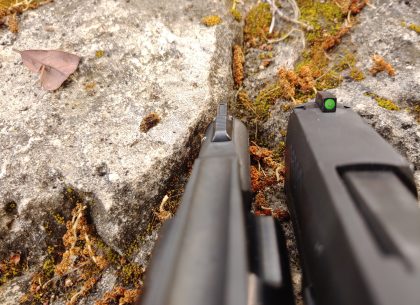 It works, but it’s far from perfect, and SIG outdoes it on all accounts.

Now here is an exciting category for a P365 vs LCR comparison. Both guns have excellent ergonomics and are designed to be easy and quick to use. I want to factor in the guns from a defensive perspective and how their ergonomics affect that.

From a shooting perspective, both guns are easy to handle for being so small. The P365 has slightly less recoil due to the slide recoiling rearward. The controls are both well-placed with the Ruger being much simpler overall. It has a cylinder release button and a trigger. The P365 has a trigger, magazine release, and slide lock.

Additionally, the Ruger has half the ammo of the P365, which is a big deal. Interestingly enough, I can reload the Ruger with moon clips much faster than the P365. One issue with the P365 and my big hands is that the magazine will not drop free because my firing hand pins it in. I have to use my off hand to pull the magazine from the well.

This makes reloading the Ruger much faster. Additionally, my fat thumbs sit right on top of the slide release of the P365 which keeps the slide from locking rearwards when the gun is empty. 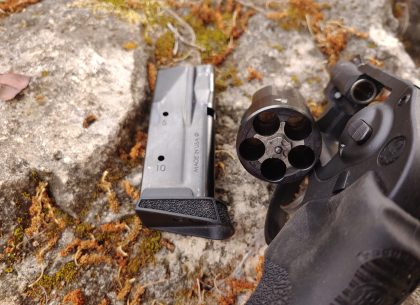 The P365 has some truly excellent ergonomics, but the Ruger LCR is simpler and easier to use. It’s an interesting conundrum. While I thought this P365 vs LCR would easy, I keep finding myself surprised.

The P365 is the better trigger if you're looking for a lighter, shorter pull with a shorter reset. That's generally the hallmark of a good trigger. The Ruger LCR has the best stock revolver trigger on the market. This will be more or less a personal preference. For me, I’m overall faster and more accurate with the P365 trigger.

That being said, plenty of people like the longer pull of a revolver. It’s harder to have an ND with, but I often find that a poor reason to give points to a trigger. The true safety of any firearm resides in the six inches between your ears.

In terms of overall accuracy, I do find it easier to shoot the P365 accurately. The shorter trigger and better sights help make the gun easier to shoot. The LCR has a shorter sight radius and sights that are harder to see. 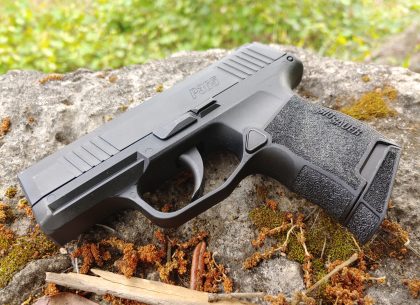 The P365 also has less recoil which does make it more controllable and soft to shoot when training. The LCR has a little smack to it when you start shooting. The Ruger LCR is an easy enough to shoot gun, but in a P365 vs LCR showdown, I have to be honest and give the point to the P365.

I will say he simpleness of a revolver and the fact the platform has been around for a longer period of time means the LCR is a bit more reliable. The LCR has fired every time I’ve pulled the trigger and never given me an issue. If a round did failure to fire I could just pull the trigger again, and I really love that about revolvers.

The P365 is plenty reliable, and I would and do trust my life to the gun. However, it has had one failure to eject and two failures to fire. It should be noted this was with very cheap ammunition and some of that ammo didn’t work in other guns. 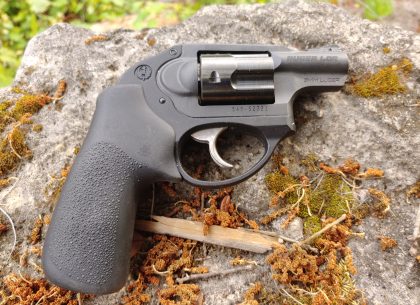 I’ll give this point to the Ruger LCR not only because it has yet to malfunction, but because if it does it will be an easier fix.

Even with all the information compiled here, this is still a good question. The P365 does offer a much higher capacity, a shorter, smoother trigger, and overall a smaller and easier to conceal profile. The LCR is one of the most modern concealed carry revolvers on the market. At the end of the day, you’d be well-served by both guns.

In my personal opinion, if I had my druthers - I’d definitely carry the P365 over the LCR.