Shots Fired! Now What? Overcoming Mental Blocks in a Gunfight 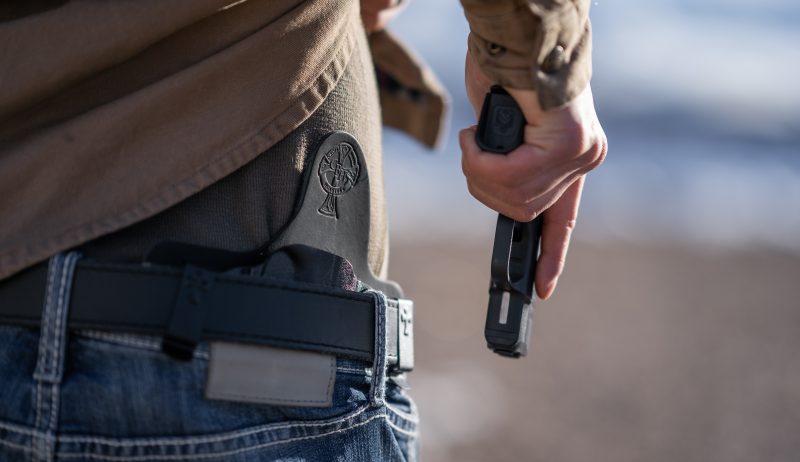 How can you prepare for that one time when all your skills are tested? It starts long before the encounter.

We all hope it never happens, but we train just in case it does: the one time in your life when you need to use your gun to stop a threat. Just thinking about it makes some people’s palms sweat. And it should. It’s a traumatic experience for everyone involved, not the least of all the shooter – you!

While we train and train on ranges, firing magazine after magazine full of rounds downrange, working on our grip, our stance, our presentation, all the elements that comprise the technical readiness part of gun ownership, training only takes us so far. And it mostly just addresses the marksmanship side of deploying a gun. Even if you train outside of the typical box range and take classes on using cover and concealment, drawing from a holster, and other tactical skills, all this training only goes so far compared to a real-life encounter. In real life, there is a multitude of additional factors that we can never train for because they cannot be accurately simulated. 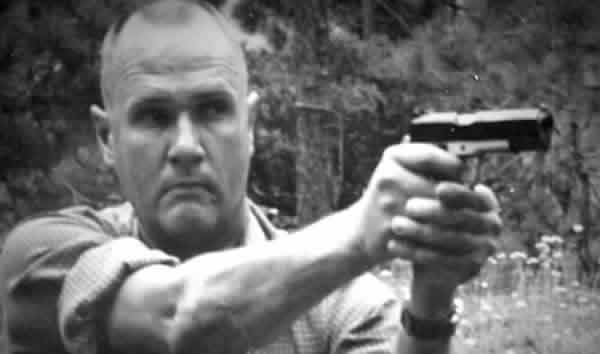 Gunsite Academy founder Colonel Jeff Cooper famously said, “Owning a handgun doesn't make you armed any more than owning a guitar makes you a musician.” He’s absolutely right. Just because you own a gun doesn’t mean you are ready to use it. This logic especially applies when bullets start flying. How we react in a real-life shootout can determine whether we live or die.

When gunshots go off, we humans always react one of three ways: fight, flight, or freeze. Every reaction, no matter how big or small, falls into one of those three categories. Watch new shooters at the range jump the first time they hear gunfire. It’s a micro version of the freeze tendency. They aren’t ready to fight yet, so they simply freeze. A seasoned shooter, on the other hand, subconsciously scans the area to see if there is a potential threat – the fight tendency – even if you know it’s just the guy in the next bay practicing.

When shots ring out, your “caveman brain” takes over, meaning that a lot of rational thought flies out the window and you revert to your most recent level of training. How do you prepare to engage, should the need ever arise?

Soldiers and police officers who survive firefights always say they fell back on their training. Civilians are the same way. We must train and train and train some more.

In a real-world defensive encounter, you’ll be drawing from a holster rather than picking the gun up from a bench. Practice the draw stroke until you can’t get it wrong. Do it a thousand times. Then a thousand more. Practice until it becomes reflex. Then practice some more. Draw practice not only includes extracting the gun from the holster but also clearing your cover garment. Practice clearing from a variety of cover garments, from shirts to jackets, because you never know what you’ll be wearing when all hell breaks loose. 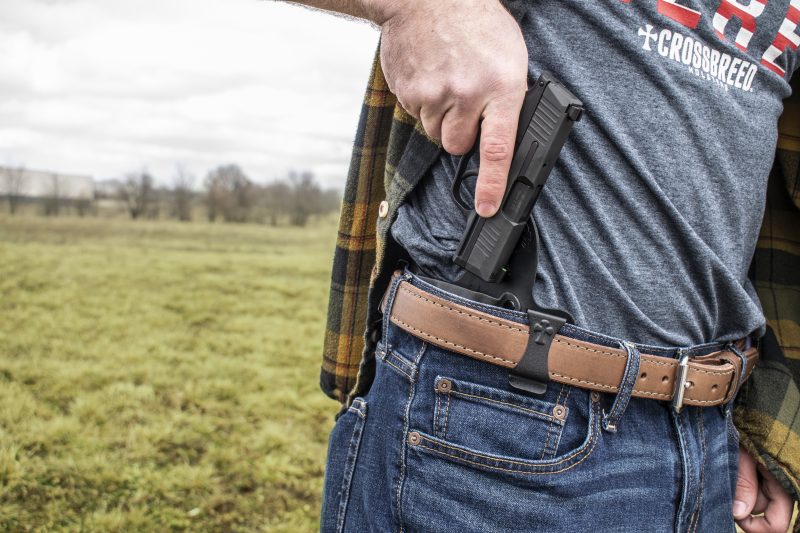 Refine your shooting grip at the range and then increase the speed of engaging the grip on the gun and drawing from the holster. Integrating the grip with the draw is critical because you don’t want to adjust your grip after the gun comes out. It should be one fluid motion: gun is extracted with strong hand grip already set, then the support hand is added as the gun is driven out toward the target. How far you can present depends on how close your target is, so early engagement of the strong hand grip is critical. 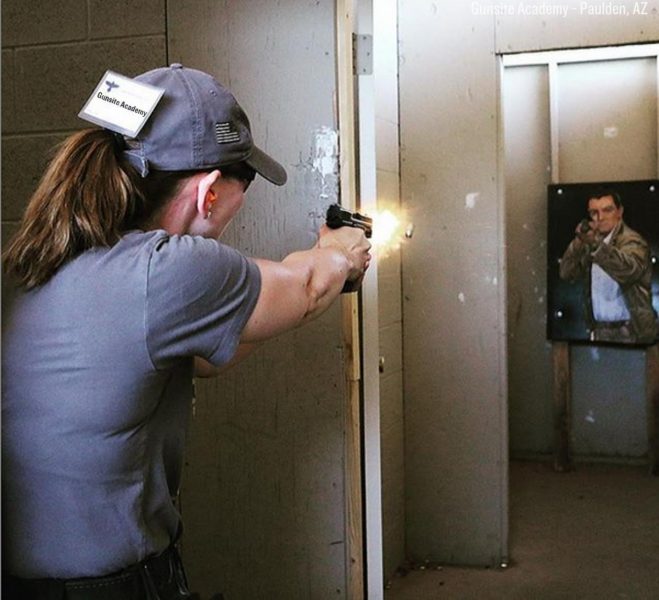 Even if you were taught to shoot with your dominant eye open and support eye closed, it’s time to learn to shoot with both eyes open. As human beings, we react to sudden stimuli, such as a gunshot, by opening both eyes wide to assess the scene, taking in as much information as possible. Work with that instinct by learning to shoot with both eyes open. This will not only enable you to engage the immediate threat that you see, but you will also more easily scan for additional threats you didn’t see at first. The awesome thing about the way humans are wired is that the gun will naturally gravitate to your dominant eye with both eyes open, so the only learning you have to do is overcoming any habits you have shooting with only one eye.

While no amount of training can fully replicate the environment of a real shootout, complete with authentic sights and sounds, one tool that comes pretty darn close is force-on-force (FOF) training. FOF simulates the real world in a three-dimensional, live-action environment using real guns with non-lethal marking cartridges that sting when they hit but don’t injure. FOF training involves reality-based scenarios to immerse participants in situations they might encounter in real life. Unlike a static range session, FOF involves all the senses in a 360-degree environment to heighten participant awareness and get them used to thinking beyond paper targets. 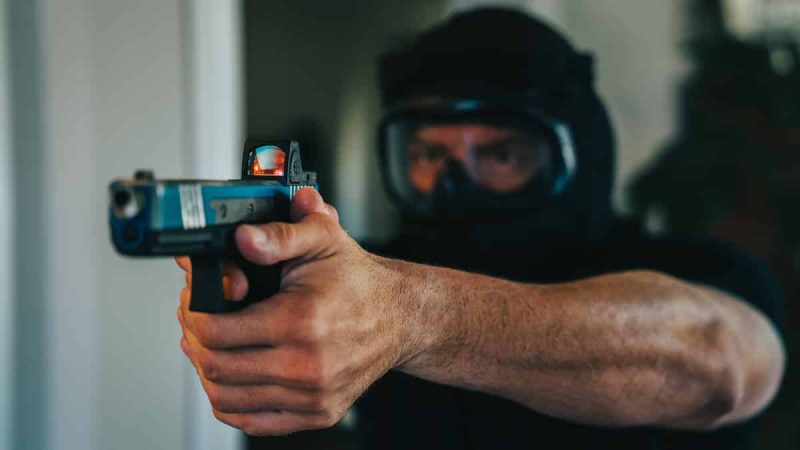 Chances are you have a plan in place at home in case the house catches on fire. At least you should! How will you assure the kids get out safely? Where is the closest door or window for a quick escape? In the same way, you should have a plan in case you are caught up in a gunfight. While no two gunfights, just like no two house fires, are ever exactly alike, there are some common themes in both. For fires, you have to have an escape route and a backup in case the first blocks your first one. In a gunfight, you have to know what to do first.

Firearms trainer Chris Cerino told me one time during some FOF training, “The street is the worst place to improvise.” His point was that everyone needs to have a plan for handling deadly force encounters. Are you alone or with your family? Where are the kids? Where is your significant other? These factors all play into what you do when the bullets start flying. Maybe you don’t even engage if the situation is all wrong for that. 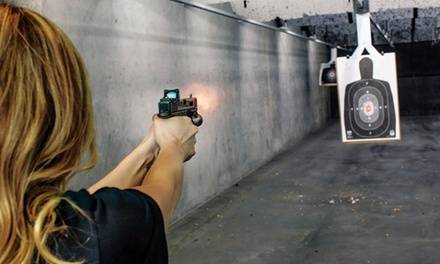 Practice, practice, practice. This may seem like common sense, but too few people actually do it. They spend too little time at the range and too much time fantasizing about how they will react. While envisioning what you’ll do can be a helpful tool to prepare mentally, physical preparation is often neglected. I don’t mean just staying in good physical shape – although that’s important. I’m talking about practicing the fine motor skills needed to react.

Just as you can never be too safe around guns, you can also never train too much. Keep training. Then train some more.