Could You Pass the MPTC Concealed Carry Qualification Drill? 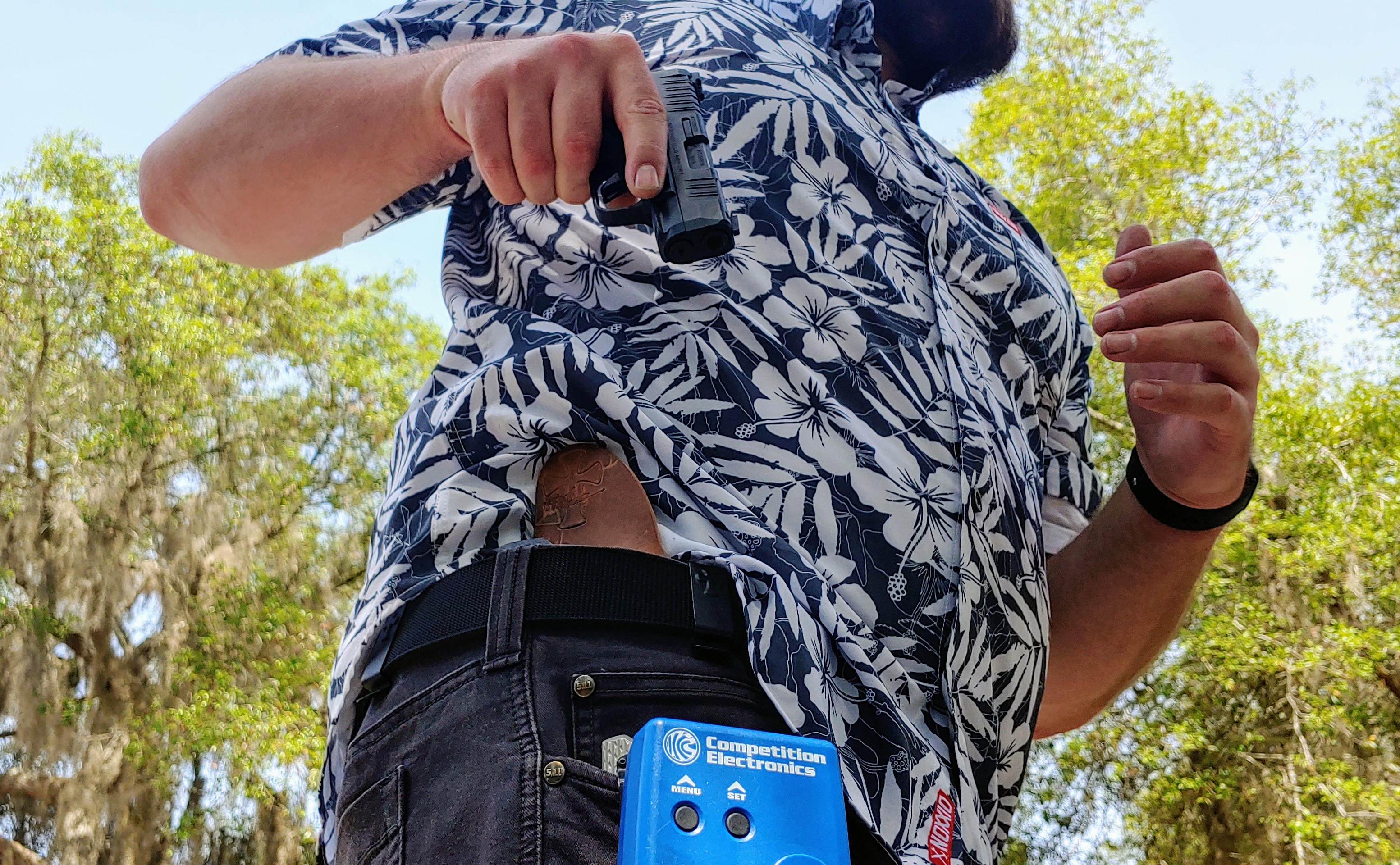 Test your mettle against the MPTC Concealed Carry Qualification.

I love shooting various qualifications. It all started way back when I first saw the Air Marshal qualification posted. Since then, I've tried multiple qualifications. I find it brings a new challenge, gives me an objective standard to test myself, and is typically a lot of fun. For concealed carriers, the Massachusetts Municipal Police Training Committee has the Concealed Carry Qualification Course. It's designed for police carrying a back-up gun or off duty but is still plenty applicable for you and me.

What is Required for the MPTC Concealed Carry Qualification?

Before we dive into this concealed carry qualification, we need to take a look at the equipment you'll need to carry it out. 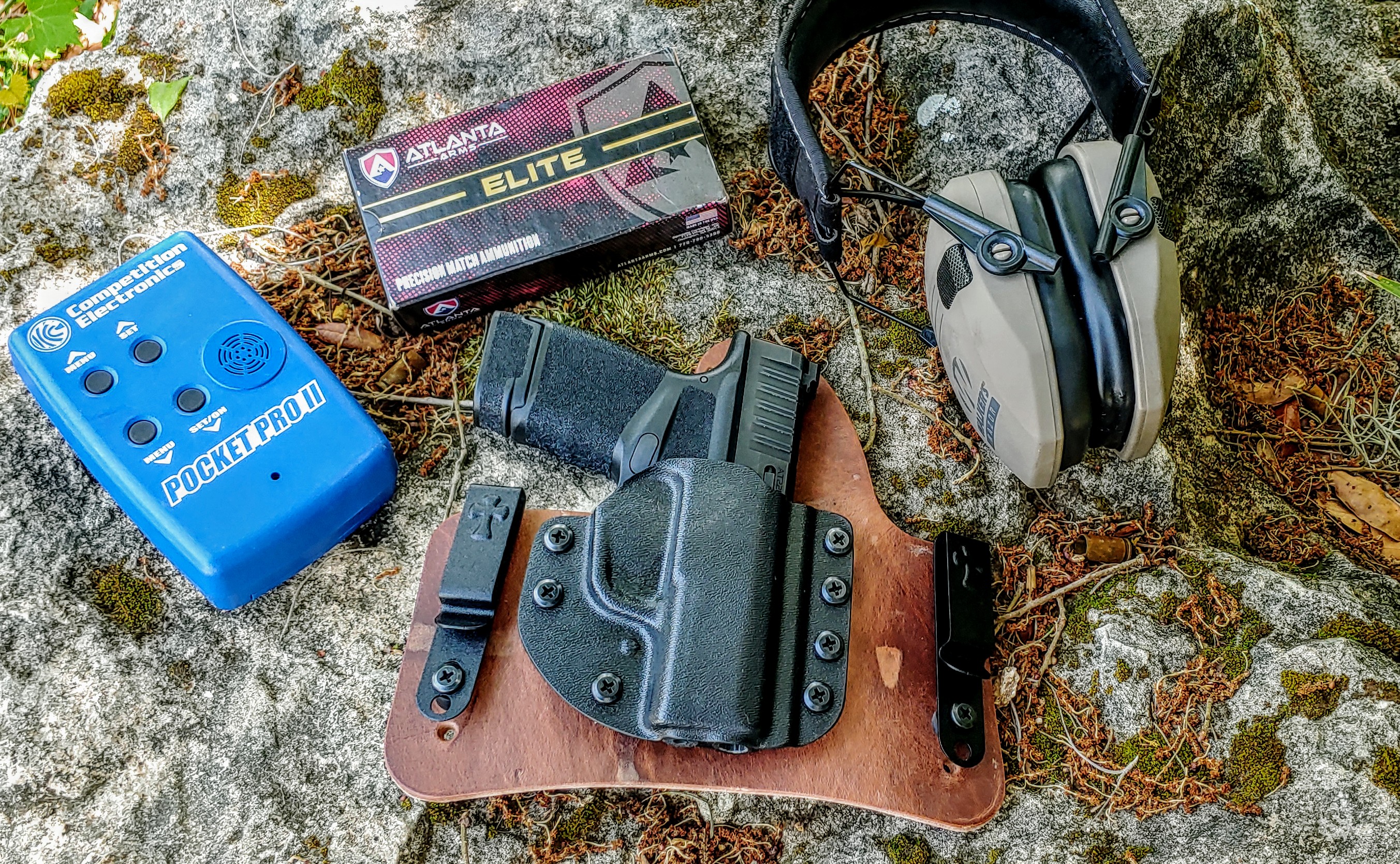 The course of fire is shot at 7, 5, 3, and 1-yard ranges. Every shot fired is done from concealment, which I love. Every portion of the qualification is timed and scored which, in my opinion, is what makes this such an excellent concealed carry qualification.

Here are a few critical notes:

Here is the course of fire straight from the MPTC manual including some notes at the end you're not going to want to miss!

This stage is shot in two phases from behind cover (if available). Shooters load five rounds and have a spare magazine or speed loader/speed strip loaded with an additional five rounds.

On the command to fire, the shooter will drop to a knee, draw from their holster, and fire five rounds two hands stronghold from the strong side of their cover. Reload, scan, and recover to a standing position at the "low ready" position.

On the next command to fire, the shooter will drop to a knee, draw from the holster, and fire five rounds, two hands strong hold from the support side of cover. Scan, reload, and reholster.

Shooters using revolvers are given three additional seconds to reload. 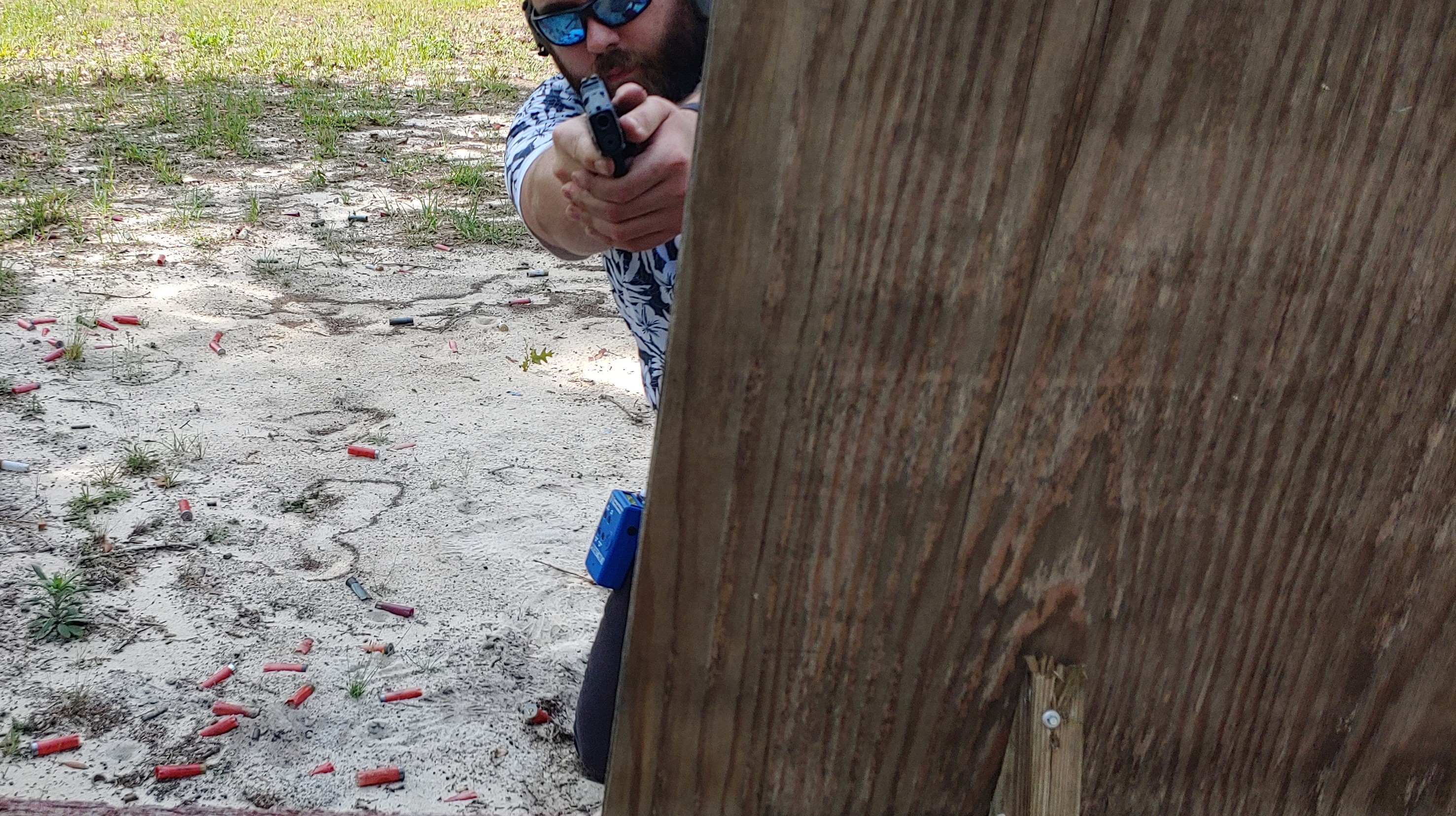 This stage is shot in two phases. The shooter will start from the 3-yard line. On the command of threat, the shooter will move back to cover on the 5-yard line, drop to a knee and draw and fire five rounds, strong hand only, reload, scan, and recover to the holster.

This phase is repeated once more and shooters using revolvers are given three additional seconds to reload. 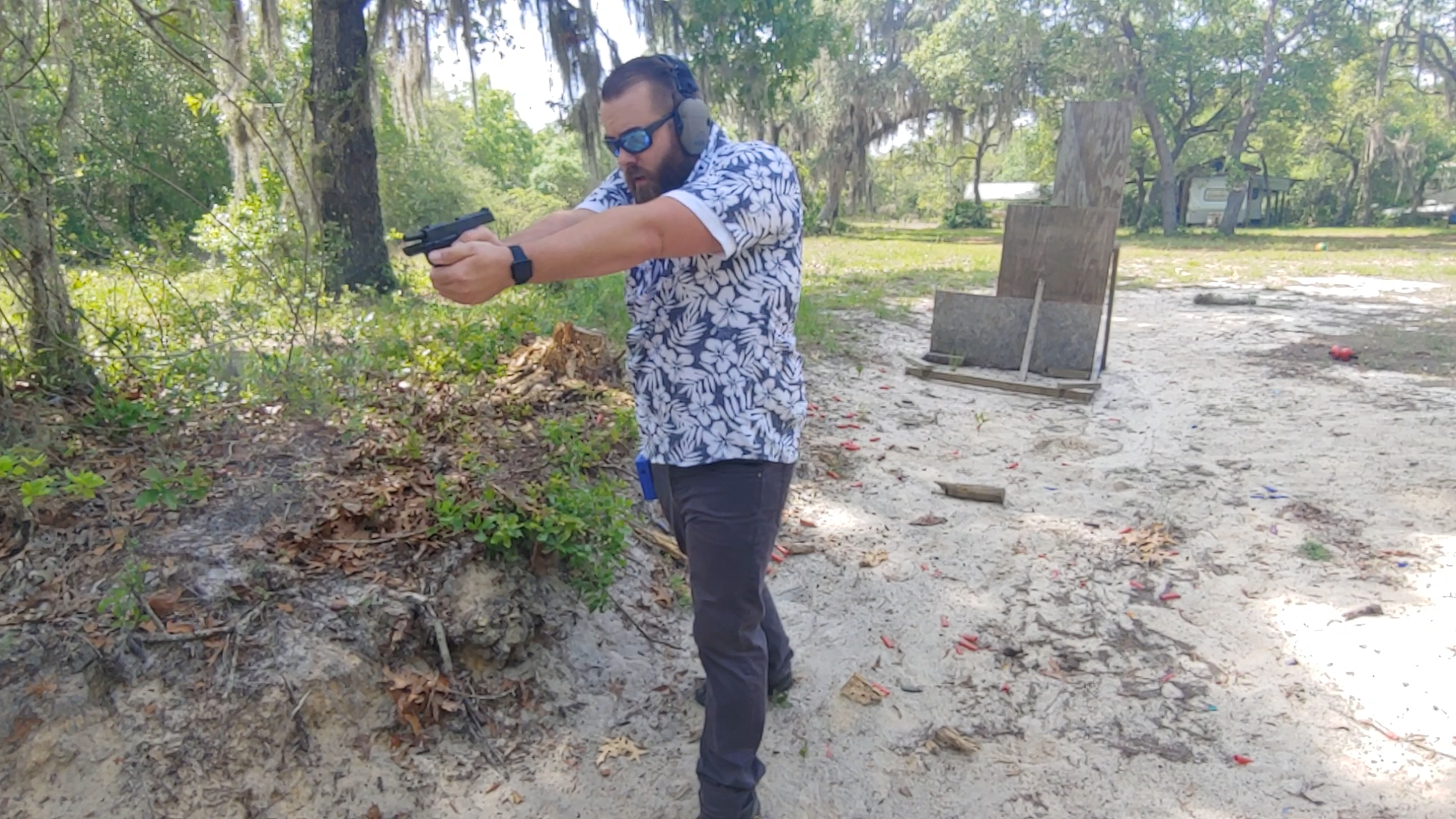 This stage begins with the shooter facing away from the threat (target). On the command to fire, the shooter pivots to address the threat, draws from concealment, and fires five rounds in 5 seconds. Reload immediately and scan for additional threats.

On the second command to fire, the shooter fires five additional rounds at their target.

On the command of deadly threat, the shooter will draw and fire five rounds with the dominant hand only. Reload, scan, and recover to the low ready / gun ready position.

On command, the shooter will transition their weapon to their support hand. On the next deadly threat command, fire five rounds (support hand only). Scan and recover back to the holster. 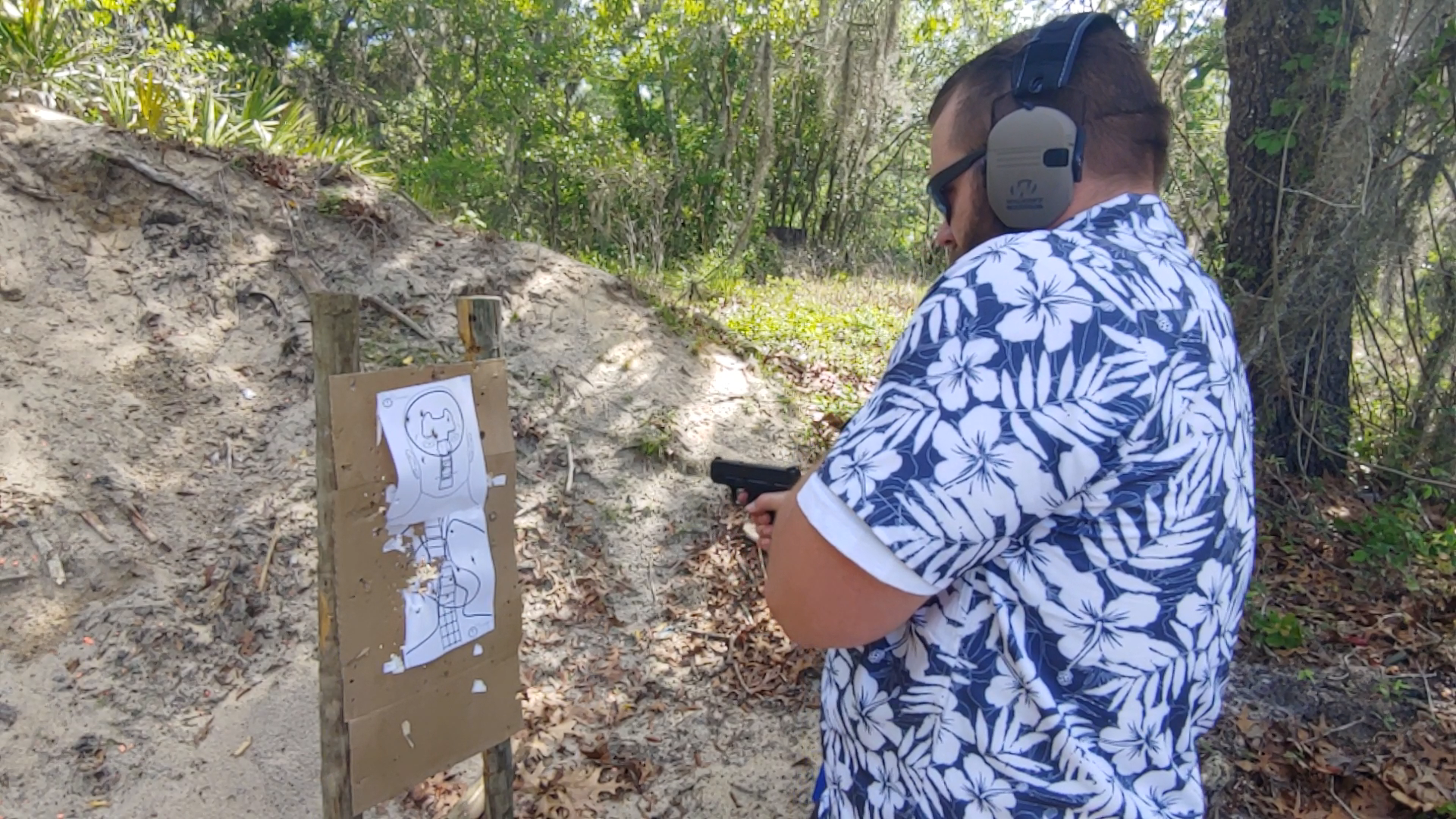 To simulate a close in immediate threat, shooters start with a weapon holstered. On the command to fire, they will perform a defensive tactic/distraction technique, step back while drawing their weapon and fire two rounds strong hand only. Scan, cover the threat, and reload if necessary.

On the next command to fire, the shooter will fire a failure drill (3 rounds) using the same procedure. Reloading will not be included in the timing for the shooter's safety. 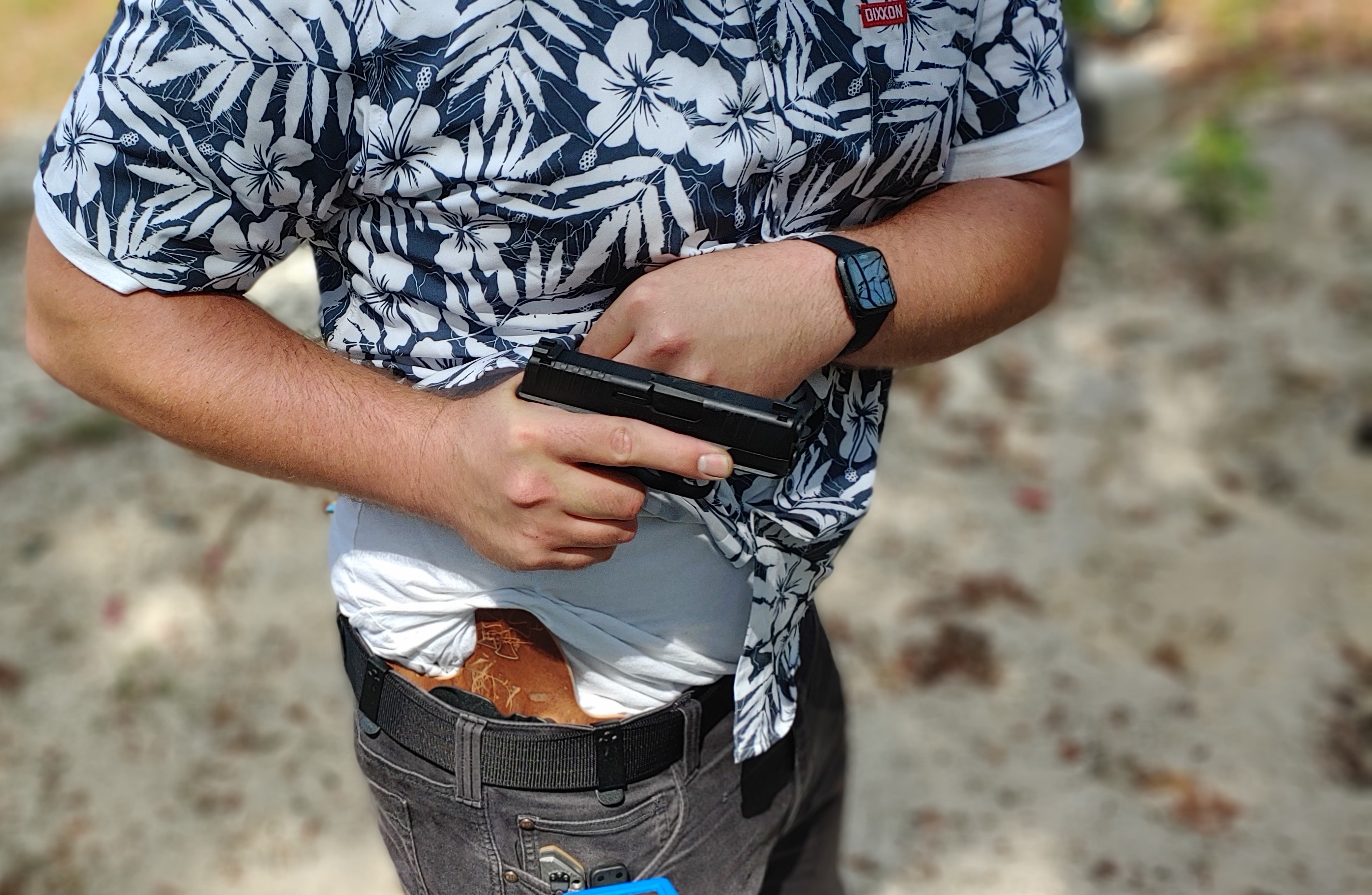 On the command to fire, the shooter will take one step, either left, right or to the rear, draw and fire three rounds, scan and recover back to the holster.

Distraction/Defensive Tactic For a concealed carry qualification, it's not needed. If you want to use it, practice yelling a command, or extending your hand as a barrier as you retreat.

Failure Drill Two shots to center mass and one shot to the head.

Command to Fire Normally, this type of qualification would be shot with an instructor present. If shooting it alone, use a timer as your command to fire. Phone apps work okay with random timers and par times, but shot detection can be tricky.

Scoring Each shot that hits counts as one point and shooters need 40 out of 50 to pass. If you can't make the time, you repeat that portion until you do.

If you'd like to print this drill to try the next time you hit the range,  a copy can be found HERE.

It's like a workout in a lot of ways. If you find it too easy, push yourself harder. Cut the par times, increase the distance, make the targets smaller, or whatever else you can do to make it more challenging.

I landed every shot and came in well below the established times. However, I did find my own weaknesses. Drawing, taking a knee, and shooting from the support side of cover was a clumsy effort. Also, I have always been super weak support hand wise and this proved that once more. It also reinforced my love of the Springfield Hellcat's sights.

You can also use it to diagnose skills you may be weak on. Do you suck with support hand only like I do? Well, you'll find out. Set up your phone as a camera and use it to see how much of yourself you expose to cover. Think of this as a tool, and use it to get better.

What do you think? Let us know in the comments below! 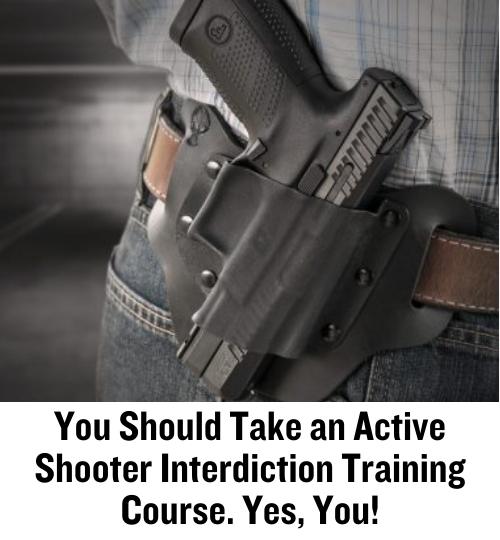