December 7, Pearl Harbor Day, is a widely observed as a day to remember the 2,390 American casualties in the Japanese attack on Pearl Harbor on this day in 1941.

With ceremonies from the White House to the Pacific Ocean, we do our best to honor the men and women who perished.

But one little-known ceremony of hope and peace has been quietly taking place on December 6th for 71 years.

According to the Department of Defense:

The annual "Blackened Canteen" ceremony centers on a single artifact -- a canteen recovered after a June 1945 mid-air collision of two American bombers over Shizuoka, Japan -- and the actions of a Japanese farmer who sought to promote peace and reconciliation after the bombing raid that killed 2,000 people in his city. 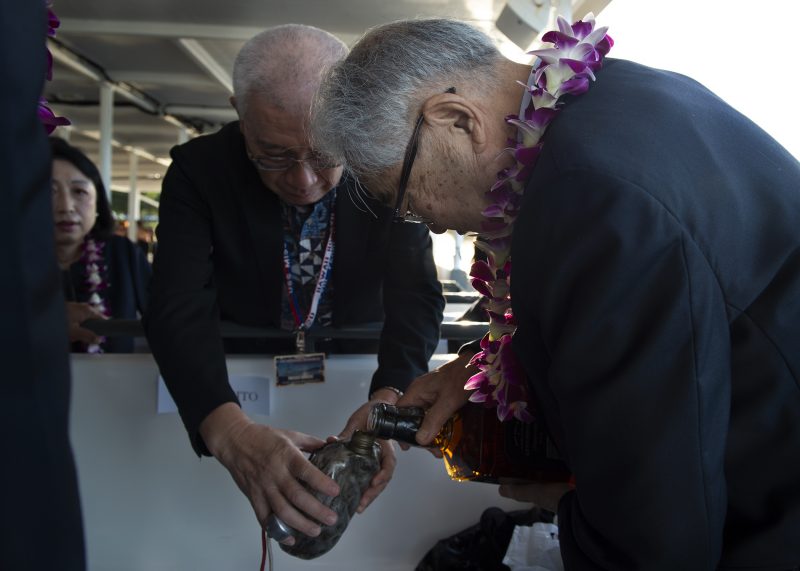 Pearl Harbor (Dec. 6, 2018)
Hiroya Sugano, M.D., pours bourbon whiskey into the 'blackened canteen' at the USS Arizona Memorial. The blackened canteen, which was pulled from the ashes during World War II, is seen as an inspiration for peace. Its blackness and heat-distorted shape represent the inevitability of conflict, yet its presence represents eternal hope for a future of peaceful understanding and reconciliation between former enemies. (U.S. Navy photo by Mass Communication Specialist 2nd Class Cole C. Pielop)[/caption]

The Japanese farmer, Fukumatsu Itoh, recovered the bodies of the airmen and buried them along with casualties from his village. Itoh also recovered the canteen from the wreckage, which bears an indentation believed to be of the hand of the American airman who was gripping it when he perished in the collision.

The story of this ceremony shows how hope springs eternal, bubbling up from the charred Earth of war:

"War is tragic and it can bring out the worst in mankind, and yet there can be glimmers of hope that out of death and destruction can emerge exemplary virtue," says Jacqueline Ashwell, superintendent of the World War II Valor in the Pacific National Monument.