Industry buzz on "P-10 C's big brother" started after pictures of the CZ's P-10 F were leaked in July 2018 and spread like wildfire when CZ updated their P-10 listings to unveil its specs that fall. 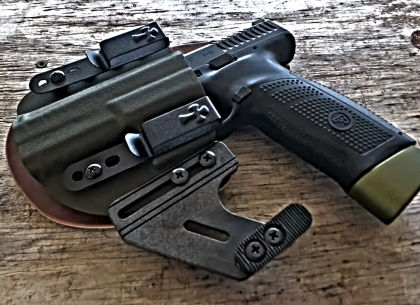 Since it's release in January 2019, the CZ P-10 F has continued to live up to the hype, impressing even the most discerning shooters.

Picked up a p10 full-size today. Really liking the non-ambidextrous mag release. And you can put the f slide on a c frame. Longer p10 Reptiles on the horizon. . #norsso #czusa #czp10f #fun #guns #p10f

From the horse's mouth:

The P-10 F is unsurpassed in the striker-fired world when it comes to flush-fitting mags. The longer slide and barrel bring a better sight radius, meaning it’s even easier to be accurate with. The added weight means it shoots flatter and reduced felt recoil.

Kyle Braschler of The Armorer's Fix recently got his hands on one and took her out for a spin to run viewers through a closer look at the P-10 F.

After unloading a few rounds, Braschler says the CZ P-10 F fits well in his hand, noting that the grip extends past his hand so there are no issues with mag changes.  He also notes the sides of the grip are softer, making it a great option to comfortably carry concealed.

Braschler was consistently ringing steel from 15-17 yards with no issues using factory sights. Seriously... like he worked for the Salvation Army around Christmas.

CZ has full capacity and low capacity model P-10 F available, both chambered in 9mm Luger with an MSRP of $524. 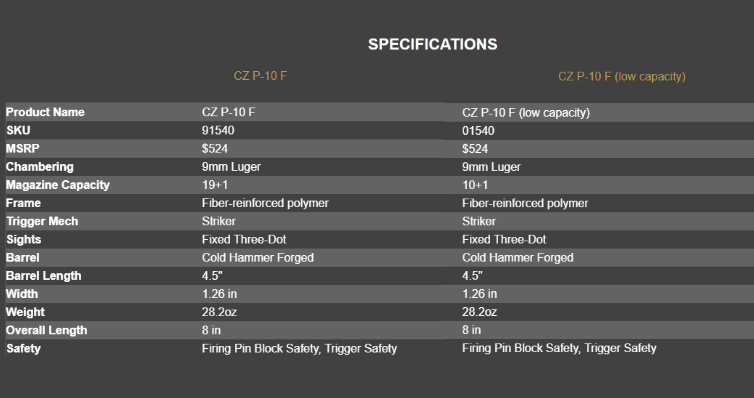 Have you shot the CZ P-10 F or are you looking forward to checking it out? What are you most impressed with on this model?

Now a wife and mother of three, she has hundreds of hours of firearms training under her belt including street encounters, low light/no light training, and is a graduate of the prestigious Gunsite Academy. Jenn was also named a Local Champion of Gun Safety by the NSSF in their fourth annual Project ChildSafe S.A.F.E. Summer campaign for her efforts to promote firearm education and safety within her community, especially for children.

Jacques continues to be an active and ardent supporter of the Second Amendment, an outspoken concealed carry advocate, and an avid outdoorswoman.