I recently watched a little American film classic called Tango and Cash. This action flick stars both Sylvester Stallone and Kurt Russell as an odd couple style pair of detectives framed for....

Okay, I'm getting off track, but my takeaway was how hilarious I found the size of Kurt Russell's laser sight on his GP100. It was nearly as big as the gun! These days, it's amazing to see just how compact lasers really are. The Crimson Trace Rail Master, for example, is one of the smallest lasers on the market. It's a fraction of the size of the gun, and ultra-small overall. This device works seamlessly with guns like the Walther PPS, the SIG P365, and even smaller guns. 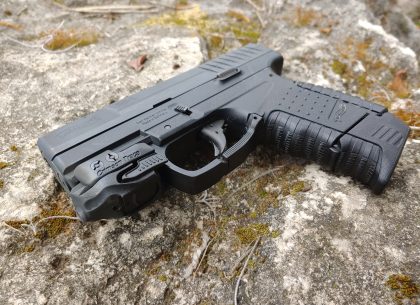 It's called the Rail Master for a reason. It's small enough for nearly any gun, as long as it has a rail. This is a small package, but the contents are outstanding. The model I am reviewing is the red laser Crimson Trace Rail Master. This device comes with a battery, as well as the promise for free batteries for life. Additionally, it comes with two lens cleaning rods, Allen wrenches for adjustments, and 4 different adapters to fit a variety of rails.

Inside The Rail Master

So what makes the Rail Master different? First, the four adapters Crimson Trace includes allows you to install the laser on a variety of handguns, as well as rifles and shotguns. Crimson Trace uses what they call Secure-Lock Technology that prevents the laser from moving under any form of recoil. As a sighting system, it would be disastrous if the Rail Master moved under recoil.

The best way to start this review is the test the above claims. Does it fit a variety of guns? Yep! With the right attachments, it fit my Glock, my multitude of Walthers, as well as my 1911 with spec rails, my 300 Blackout Upper AR 15, and I feel it would fit just about any other gun.

In terms of recoil, it easily withstood the power of a full size 10mm 1911. I zeroed the gun and laser from a rest and put about a 150 rounds of 10mm through the gun. I went back to the rest and re-checked the zero. The laser didn't budge even a bit. The system works, as long as you have the right attachment.

10mm is expensive ammo and I feel the big 6 inched barreled Springfield 1911 wasn't the recommended market for this gun. Instead, I tossed it on my favorite Walther PPS for a bit of a long term test. Zeroing the sight is very easy to do and all you have to do is use an Allen wrench to make adjustments. A quick zero just means adjusting it to your iron sights. From there you can make slightly finer adjustments if needed. 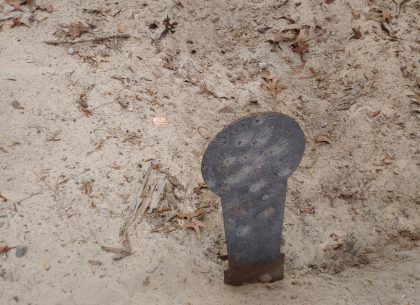 Turning the device on and off is quite easy. The Rail Master has ambidextrous on and off switches that sit exactly where your trigger finger lay. Additionally, I can reach the second switch with the thumb of my non-firing hand. You receive very tactile feedback from the switch, which is very nice and allows you to know the rail master is up and running.

Once the optic is zeroed it is spot on, and honestly a lot of fun. I shot it in a variety of different time frames, including indoors, in the evening and at high noon in Florida. Depending on the external light the laser can be seen from a variety of ranges. At the indoor range, I sent the target out the furthest it could go, which was 25 yards, and could see the laser in all its brightness. In the evening outdoors I found it to the same level of visibility. At high noon the laser was visible out to 10 yards easily. Beyond that, it was just easier to use your sights.

Where the Rail Master Shines

The Rail Master is perfect for shooting in situations where you can't use your sights. This could in a situation where you can't see your sights for any variety of reasons. Maybe it's too dark? The laser here is a perfect companion. It's also a great tool if you find yourself trapped inside extremely close quarters, like inside a car. Using your sights would be nearly impossible. If you are forced to shoot from close retention you'll have the same problem. The laser allows you to safely confirm your target before you pull the trigger. 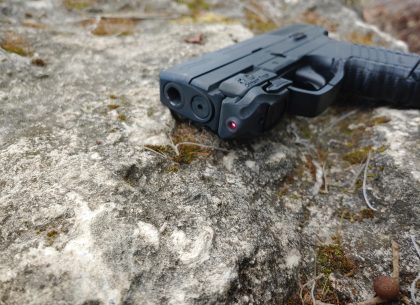 This is what makes it an excellent tool for fear-based shooting. If your hands are shaky and you can't see the sights due to the adrenaline the lasers shaking will be a very distinct indicator of where you are going to hit. It's just an outstanding device for when your sights can't be used.

One fear I had was would the Rail Master lens would become carboned over. I've shot a lot with lights and often a layer of carbon coating will build up on the lens. I was afraid the laser would dim after shooting a few hundred rounds. It seems I was wrong. The design itself was damn smart. The laser has a deep beveled lens that protects the carbon from clinging to the lens.

A little gets on the lens, but after 350 rounds of 9mm it hardly any. The little lens cleaner knocks that out quite fast. The Crimson Trace Rail Master is an outstanding piece of gear. It is actually quite capable, and a lot of fun to shoot with. Shooting accurately from the hip and hearing the ding on steel shot after shot is absolutely amazing. The Crimson Trace Rail Master is a great piece of gear, and if you choose to carry one we can help you by providing quality holsters.

Travis Pike is a former Marine Machine gunner who served with 2nd Bn 2nd Marines for 5 years. He deployed in 2009 to Afghanistan and again in 2011 with the 22nd MEU(SOC) during a record-setting 11 months at sea. Travis has trained with the Romanian Army, the Spanish Marines, the Emirate Marines, and the Afghan National Army.
He serves as an NRA certified pistol instructor and pursues a variety of firearms based hobbies.